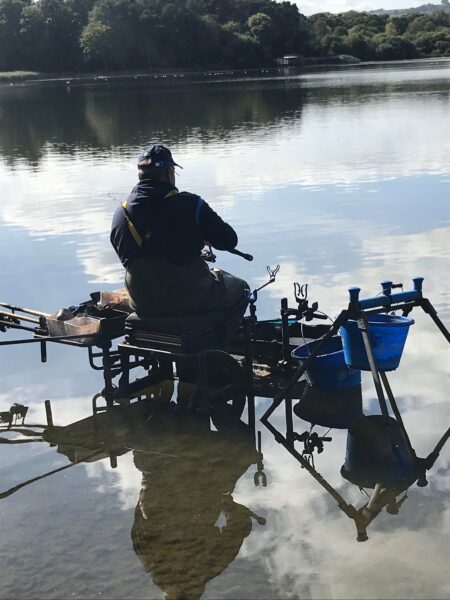 Before I even attempt to answer the question in the title of this post, I think it would be useful to define what a club angler is, so here goes,

Club Angler – angler who is a member of a fishing club and may or may not fish club matches.

and then you have open anglers,

There, simple isn’t it?

Uh, no it really isn’t! Obviously you have club anglers that fish opens and vice versa, does it really matter? Not to me but like everything in fishing, people have different opinions and I thought it would be interesting to explore it from both angles.

At this point I want to make it absolutely clear that it doesn’t bother me in the slightest who’s fished or fishes any of the matches I’ve either organised over the years or taken part in. As far as I’m concerned, the more, the merrier, even if Des Shipp phoned up and wanted to fish! The trouble is, it can be a very emotive subject and I can totally see why it would upset some people when so called sponsored anglers turn up to a club match and take home all the loot! 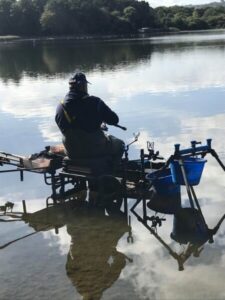 Dessy on the resi! Des Shipp coming to a club match near you soon (or maybe not!)

So where do I start with this? I think we need to go back to the oft perceived ‘Golden Era’ of match fishing where there was a kind of structure and order to your fishing career (if you want to call it that). Most anglers got into fishing as youngsters, joined the junior section of an angling club, graduated to senior level at 16 and then when they started doing really well in the club competitions, the next step was to move on to the open circuit.

There weren’t any commercials back then, pole fishing in the UK was still in its infancy and carp were fished for by specimen anglers. The open circuit was certainly very different with nowhere near as many matches to choose from at the weekends. As a result they tended to be bigger competitions with people from all over the area coming to fish them. Also there were hardly any sponsored anglers, certainly on an individual basis with most being part of a team, often linked to a tackle shop. Those anglers that were sponsored by the big tackle companies were at the very top of the sport.

Now lets compare those points to todays match scene, now there are commercial fisheries everywhere with opens several times a week although very often they are modest affairs with only 10-20 fishing and the angling world has now gone pole and carp crazy. Regarding sponsorship, the world and his wife now have a sponsor, usually more than one, although in reality, it’s not a sponsorship at all, it’s getting your bait or pole floats at trade price. This basically means it’s not costing the bait firm or float maker a penny, in many cases you have to buy your own clothing as well so you are effectively paying for the privilege of advertising their products, now that’s plain crazy but such is the desire to be able to say you’re sponsored.

There’s no loyalty either these days, even the top anglers seen to be swapping sponsors on an almost weekly basis and must have wardrobes full of coats of many colours! Noticeable exceptions to this revolving door of brands are Bob Nudd who has been with Browning for a very long time, although even Sir Bob had a brief flirtation with FOX but normal service was resumed not long after and then you have Des (Preston) and Will (Daiwa) who have been with their respective sponsors for many years.

Anyway, I’ve digressed somewhat from the original subject but not too far as I think it’s all kind of linked, so we now have this frankly weird situation where in some cases we’re getting large club matches and small opens due to the latter being diluted by the commercials. That in itself isn’t particularly an issue but what really grinds peoples gears is when one of these perceived ‘top sponsored anglers’ fishes a club match and wins, often they are described as ‘muggers’ or ‘bandits’ and although probably passed off as banter, you know there will be some moaning on Facebook or Whatsapp on the Sunday night.

Now like I said at the very top of this piece, it doesn’t bother me at all but I can also totally understand why some would feel aggrieved by this highway robbery. It does seem to occur most often at commercial venues when the ranks of a club match are swelled at away days by venue experts looking for some easy pickings. Is this ‘not the done thing’? Is it taking the Michael somewhat? What, if anything, should or could be done about it?

Surely if somebody joins a club, that entitles them to fish any of the matches? Does it matter that they’ve bought the licence to fish one, two or ten matches! Are we on dodgy ground if we start stipulating that certain criteria need to be met before you can join a club and fish matches, is that even something a club can do? Would it cease to be a club if not open to all, I don’t know, certainly people have to be vetted, proposed and seconded to join bowling clubs and the like so maybe that’s a route we could go down.

On the flip side, what about long standing club members who cherish the relaxed, laid back nature of their fixtures and don’t want it to be all about the money or winning, surely these guys who do all the hard work behind the scenes at work parties and committee meetings have a say on how their matches are run. Do people then vote with their feet? Is it then as simple for the club to compare new members gained versus old members lost? I don’t think so, a club is more than just plus signs and minuses on a spreadsheet, it’s a community.

Let me throw a couple more scenarios in the mix, I half jokingly said at the beginning that I’d love it if Des Shipp or Will Raison booked in for a Dillington match, I think it would amazing and interesting to see how a world class angler approached our venue. But hang on a minute, I know for a fact that Des regularly attends club matches on a stretch of river that he loves fishing, is it because he wants to rob old men of their pensions and relieve school kids of their dinner money? Of course not, he just really enjoys fishing that stretch of water and there’s no other opportunity to do so in competitive situation.

Or how about this? A group of mates have always fished club matches together since they were at school but one of them has got better and better over the years and now wins more than his fair share. As a result, he’s been approached by a tackle firm who would like to sponsor him, should he be immediately banished from the club and told to go and fish opens or perhaps turn down the sponsorship so he can continue to fish with his mates and the club he loves on the waters he enjoys fishing, would it make him any less good if he spurned the coveted branded jacket?

There’s loads of crossovers too, lots of club anglers fish opens, there’s also loads of open anglers who aren’t any good! You read in the angling press sometimes about how a certain method has been banned at a venue basically because an angler was winning too much using it, is that fair? Surely the angler should be applauded for getting it sorted instead of being ridden out of town. Changing that around, say an angler is winning nearly every club match, should he then take the next step up to opens, what happens if he does and is getting battered every week, is he allowed back again or has he been ostracised for life!

You could also look at it and say would the angler winning every week not be a little embarrassed, what satisfaction do they get from being a big fish in a little pond? Conversely why wouldn’t all the ‘little fishes’ try and up their game and pull his pants down (not in a weird way!). People do go on winning streaks, perhaps their drawing hand is performing very well but it doesn’t last forever so how many matches are they allowed to win before being given the cold shoulder?

I bet a few people read this and think it’s aimed at them but it’s really not. Is there any way of keeping everybody happy? Nope, of course not, we wouldn’t be anglers if we weren’t moaning about something!

Maybe clubs could introduce a system where you need to have been a member for so many years to be eligible to fish the matches (that wouldn’t stop it) or perhaps you have to fish a certain number of club matches to be able to fish the away days (that could work but then those people just wouldn’t join the club!) or just remove the money element of it (that would probably do it but I can’t see that being a popular option).

How about having separate pools pots for the regulars and the ‘bandits’ but again very difficult to define and if you only have one open angler, he’ll be fishing against himself (guaranteed a pick up I suppose!). It all just seems too complicated and a lot of hassle for my liking but I suppose it could be done.

Wouldn’t it be nice if we could just go fishing?