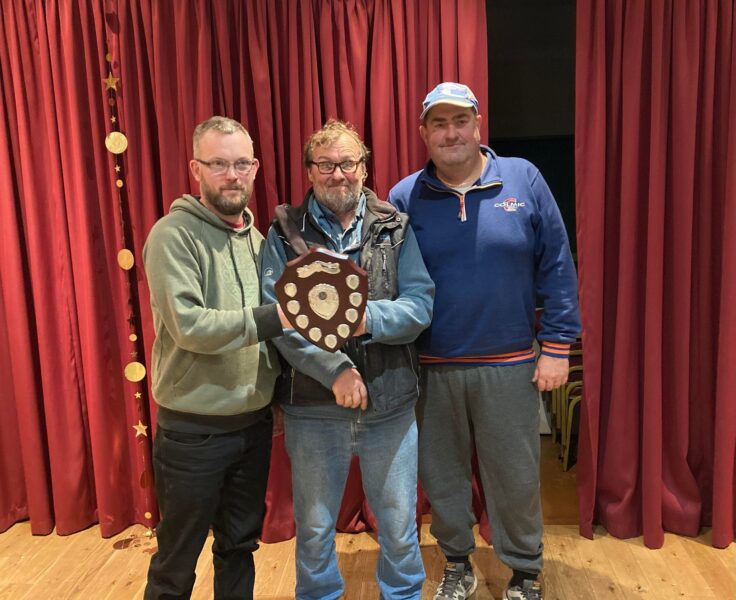 In memory of Pete, who sadly passed away this year, the club decided to hold a pairs match in his memory. It would be split between the Isle and the pond and I was fishing with Terry ‘The Toast’ once again. Given my recent form on the river (blank, blank and 5oz), it was decided I would be better off at Dillington!

There was a brilliant turnout with lots of anglers who knew Pete along with the regulars attending and breakfast at the bowling club was busy on Sunday morning. It was lovely to Paul Greenwood who was partnering Scotty Russell and probably hadn’t fished the river for over twenty years. Fred Brown and Andy Welch were fishing and even Justin Charles came out of match fishing retirement for the day.

After everybody had arrived, it was time for the ‘Wheels of Doom’ to do their thing, to be in with a chance, a decent peg on the river would be required and when our names came out the hat, we didn’t get one! My home for the day was peg 18 on the pond which I was happy with but Terry was on M4, two above the bridge at Midelney and it had blanked in the last match!

Fancied pairs after the draw were Rob Cox, who got probably the best peg on the river at the moment, number 14 (the Tank Traps) with Leighton on 6 out the pond. Paul Greenwood drew H3 at Hambridge and Scotty was on 21 with loads or room and is always hard to beat on the pond. Simon Garbutt had the first one above the bridge at Midelney with Hurf on 13 and Danny B was below the bridge with Chris N on peg 5.

The match would be decided on points, going to weight in the event of a tie and there were two six peg sections on each venue. I thought you’d need two or three points to win it and four or five to sneak into the frame. When we got out the pond it was tap water clear but encouragingly there were lots of small fish topping. In my section of six, along with Scotty on the end, I had Bagger Burton on my left, Alvin Jones on my right and then Paul Adams on 16 with Tony C on 14. 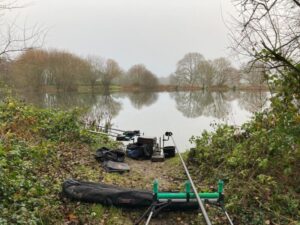 It was a chilly, foggy morning and I could barely make out the anglers on the far bank although some wag over there said it was a blessing they couldn’t see me and it was just a shame they could still hear me! Neil Dopson was there taking photos again and did a brilliant job in challenging conditions, check out his page here. 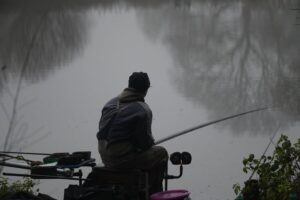 I set up a 0.4 gram Perfect Gloucester with a 0.10mm bottom to a size 18 Guru F1 Maggot hook and a little Preston Chianti for fishing through the water. On the side tray I had casters, maggots, disco pinkies, hemp plus Bait-Tech Pro Nat Fine Lake Dark.

10:00 arrived and I got us underway before cupping in two balls of groundbait at 11.5 metres. Starting with single pinkie on the hook, I really thought it might take a while to get a bite but the float didn’t even settle and a nice 3oz roach got me off to a nice start. Les over on peg 7 got off to an even better start with a 2lb plus skimmer first chuck on the feeder!

It was a bite a chuck from small roach and perch and I was really enjoying myself, I could see Bagger and Scotty catching as well but couldn’t see how the others to my right were faring. After an hour I had 29 fish on single pinkie or maggot for probably 1.5lb which I felt was ok as I thought 8-10lb would be good today. 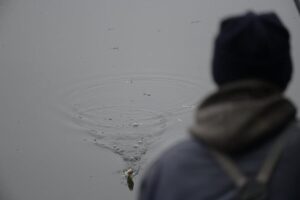 Going into the second hour, bites started to slow, I did try caster and the float buried first put in with a nice 8oz perch but then it was just back to odd small fish. From what I could see, the guys on the far side were mainly fishing the feeder and struggling, Les had caught a couple more smaller skimmers and was probably top in that section.

Then I noticed a missed call from Terry so I phoned him back, hoping he was catching but fearing the worst. He said he hadn’t had a bite yet and although the lads on the pegs below weren’t bagging, they were getting a few and we were in trouble. Big Frank turned up and said he’d been down the river and Rob was catching well although Steve P on 15 only had a couple of fish.

Bites were now few and far between and I was really struggling, just getting the odd small fish, Bagger Burton was still catching small perch and then had a better one of 6-8oz and I could see Scotty swinging in small roach. I tried going to 13 metres but only had a couple of small roach, back on my original line I had a nice perch on maggot and was hoping some more would show in the latter stages.

Things didn’t really get any better and when I shouted the all out, my clicker was reading 69 fish and I’d had most of them in the first two hours. I took my kit back to the car and grabbed the scales to start the weigh in. As I passed Scott he said he’d struggled and only had 105 small fish although I had seen him land a nice perch, he reckoned Bagger Burton would win the section with 7lb.

Chris N was first to weigh on peg 5 and had 2lb 12oz of roach and perch, Leighton weighed 1lb 2oz which included a nice skimmer and then Les went into the lead with 4lb 4oz of skimmers. Andy Welch had 1lb 12oz on peg 8, Andy Saunders weighed 1lb 9oz next door and then Hurf had 3lb 5oz which put him second in that section. 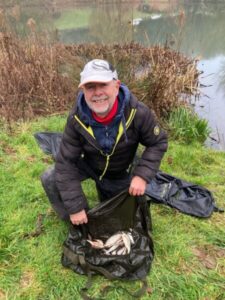 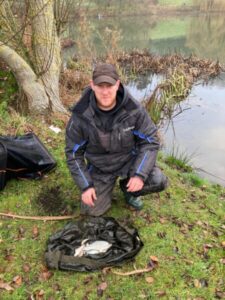 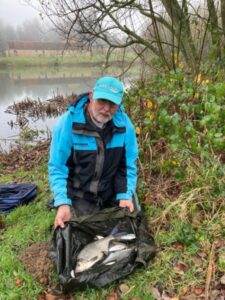 Les had 4lb 4oz of skimmers on the feeder 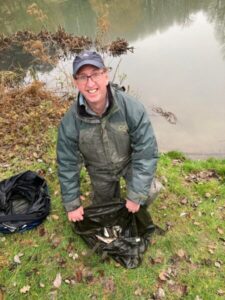 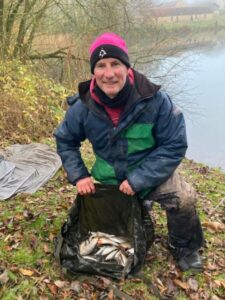 Hurf was second in the section with 3lb 5oz

Tony C had 1lb 13oz on peg 14, Paul A had really struggled for 2oz from peg 16 and then Alvin weighed 4lb 2oz. Then it was me and my fish went 5lb 9oz which was better than I thought but I knew it wouldn’t be enough. Bagger weighed 6lb 11oz before Scotty’s fish went 7lb 6oz to win the section. 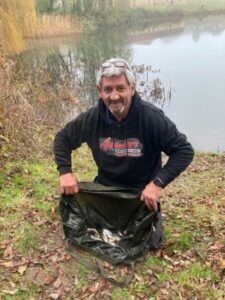 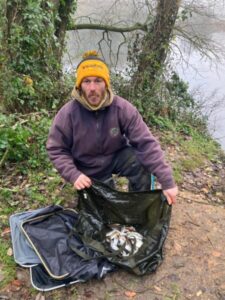 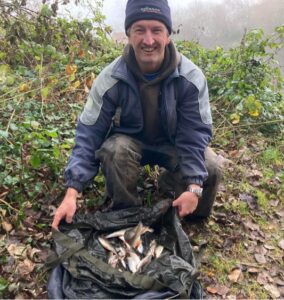 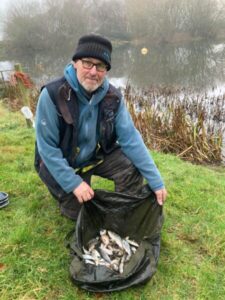 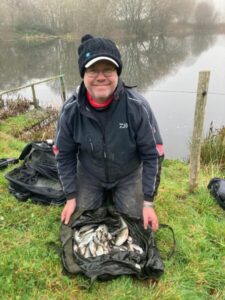 Scotty won the section with 7lb 6oz of roach and perch

On the river the fancied pegs had done well but most had struggled. Rob had the top weight with 19lb of chub from 14, Paul Purchase had 15lb 6oz from H3a which included some lovely perch and then the standout result was Chris Parr who’d won his section with 7lb 11oz from 125 which included 300 minnows, 100 gudgeon and a few roach. Paul Greenwood finished third in his section with 6lb 6oz of roach from H3. Photo credits – Rob Cox*, Paul Purchase ** and Chris Parr*** 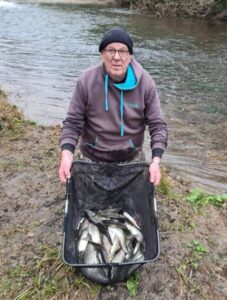 Rob had a lovely net of chub for 19lb* 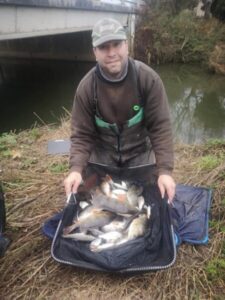 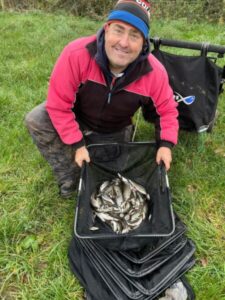 Terry had managed to avoid the blank but his 3oz put him last in the section, Simon G below him had 4lb 8oz and then Neil P and Danny B on the other side of the bridge had 3lb 12oz and 3lb 14oz respectively. Elsewhere Steve P had 10oz from peg 15 and at Isle Brewers it had been tough with Justin weighing 2lb 4oz followed by Andy Ankers with 15oz and Fred had 7oz. Thanks to Terry Morgan for the photos^ 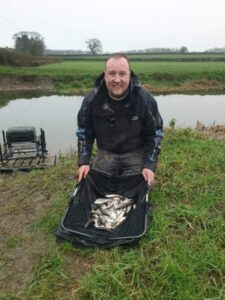 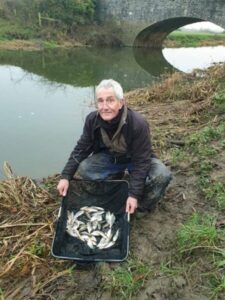 Danny B had 3lb 14oz below the bridge^

Back at the bowling club for the results and it was lovely to see Pete’s family who had come along to do the presentation. After everyone had enjoyed some pork and beef rolls plus roast potatoes, it was time to announce the inaugural winners of the Pete Lonton Pairs shield. In first place with a combined points score of three points, Chris Parr and Ian ‘Bagger’ Burton were crowned champions. 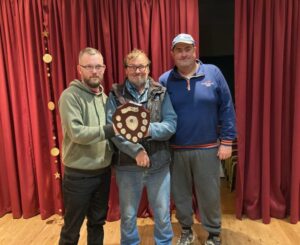 Runner’s up were Scott Russell and Paul Greenwood with four points and then Chris Norton and Danny Blunn tied with Les Braunton and Andy Ankers on five points with the former just edging it on weight, 6lb 10oz to 6lb 3oz.

The club donated the peg fees from today to charity and along with the money from the Xmas Fayre a total of £132 was raised for the British Heart Foundation which is brilliant.

A massive thanks to Rob Cox and Terry Morgan for another well organised match (although can you sort yourself out with a decent peg next time please partner!) and also to Ilminster Bowling Club for looking after us before and after with some lovely food and of course to all the anglers for supporting the event.

I had nuggets off Andy Saunders and Steve P but Hurf had one off me with his two points to my three so the charity Nugget-O-Meter now stands at £7. 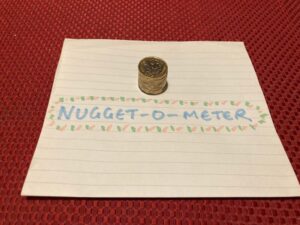 Here’s a list of the framing pegs (top three) from the seven matches on the river so far,

You lucky lot, Santa has come early here at Against Men and Fish, Somerset Angling are offering 15% off up until 31st December 2021when you shop online, just use the code AgainstMenandFish15 at the checkout.

As this will be my last match before Xmas I would just like to wish everybody who reads the blog A Very Merry Xmas. I’m looking forward to having some time off and I did have lots of matches planned over the festive period but that all depends on what happens in the next few days. Please stay safe everyone and try and enjoy yourselves in these trying times.