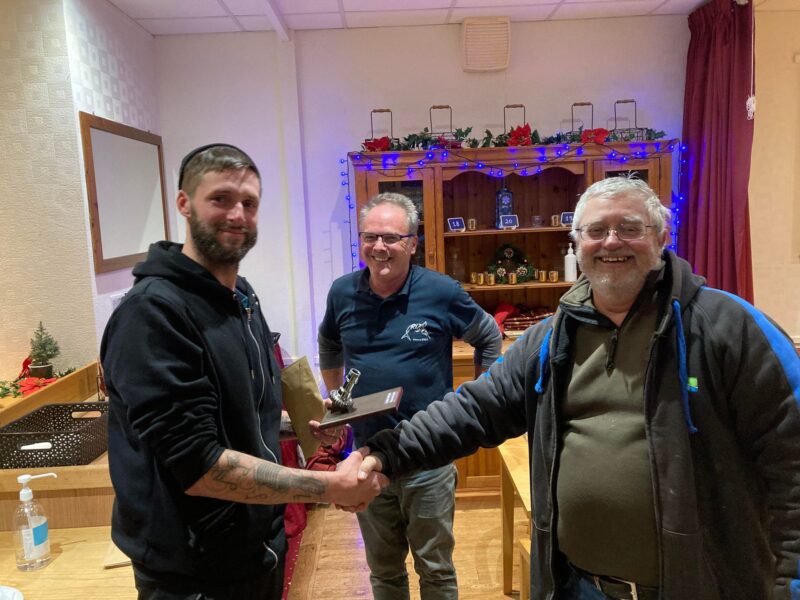 For the second of my trilogy of festive fixtures, it was the Chris Patten Xmas Fayre. Another match I always look forward to although after blanking in the previous two river matches, I didn’t want to make it a hat trick! The day got off to a great start at the bowling club with a cracking breakfast and plenty of banter. Always well attended, we had 23 anglers fishing today and it was great to see Andy Welch, Freddie and George Perkins who was fishing his first match for ages.

All too soon, it was time for the ‘Wheels of Doom’ to spin and either make or break the day, like most I fancied 14, 126 or the pegs either side of the bridges at Hambridge and Midelney. My name came out followed by peg number 128 and I knew I wouldn’t be winning today. It can be a great swim earlier in the season and I had 23lb in the inter-club fixture but in the last match it did 7oz and the whole Isle Brewers section had been tough that day.

The ones to watch today would be Jake in the Tank Traps, Bish on 126, Simon Garbutt in the weir pool (120), Les and Parker ‘The Pole’ by the bridge at Midelney and Neil on H3a which had done well in the last match. As I unloaded the car at Isle Brewers, there was a bitterly cold wind and with most of the pegs pretty exposed we were in for an uncomfortable day. 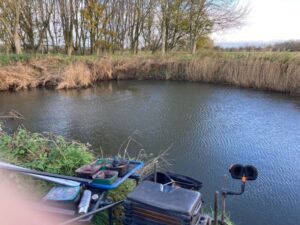 Getting ready, I didn’t see a single fish top and that hat trick was starting to look distinctly possible. I was a bit pushed for time and just set up a 1 gram bodied float with a size 18 Guru Match Special to 0.10mm. Bait was just the the normal maggots, pinkies, casters and hemp. 10:00 arrived and I started at 6 metres in the deeper water with single red maggot and never had a touch, I went to 11.5 metres in the flow with the same result and added another section but it was nigh on impossible to hold any more than three sections of pole in the wind.

With an hour gone I was still blanking and starting to go off this river fishing lark! Bish turned up and said him and Bagger Burton on 126a had only caught minnows so it was fishing really hard. I started trying the inside and finally saved the blank with a couple of minnows but I wasn’t enjoying myself at all. The wind was evil and I had to put my gloves on for the first time this winter and I was really glad I’d done a flask today.

I had a couple of phone calls, one from Fred who was on H5 (where I was in the last match) and he hadn’t had a bite yet but said they were catching odd fish above him and the other from Jake in 14 who said he’d only had four chublets. In amongst the minnows, I did have a tiny gudgeon to give me a mixed bag of small fish.

With time passing incredibly slowly and my flask emptying at a much faster rate, I had another visit from Bish who said he’d still only had minnows and a bit later Ian turned up and said the same. I kept trying caster but never had a bite and a couple of times tried fishing longer but it was a waste of time with the wind. Towards the end of the match, a pike rolled to my left and although I only saw it briefly, I have to say it looked very bored and hungry!

I wasn’t upset to hear the all out and knew my 42 minnows and a couple of little gobies wouldn’t be any good today. Bagger Burton had the scales so we began the weigh in with Bish, with thirty minutes to go, he’d only caught minnows but then with the light starting to fade, he had some roach on caster for 2lb 5oz. Ian also found a couple of roach near the end and lost a chub, he weighed 15oz. 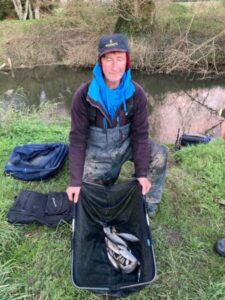 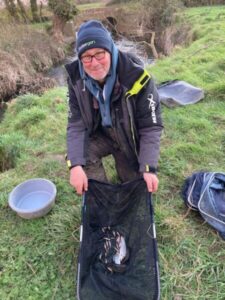 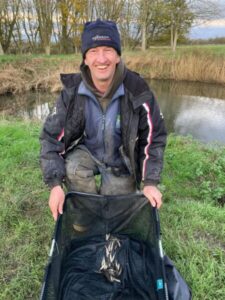 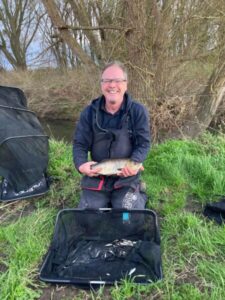 Terry had 2lb 12oz which included a nice chub 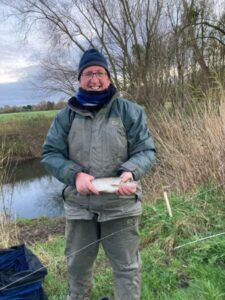 Andy had a chub of 1lb 5oz first chuck

Above the bridge, Dave P had 1lb 8oz from 125 and then Tony C had done brilliantly on 124 catching three chub and a couple of small fish for 8lb 14oz, he lost three as well. Back at the results and there were a lot of anglers looking relieved to be back in the warm! It had been a struggle for most with a fair few blanks and people recording ounces. Jake had the top weight with 11lb 12oz and has a great record in this event in recent years, he was second with 16lb odd from the same peg last year and won it in 2018 with 5lb 9oz at Dillington. A brilliant angler, a really nice guy and a popular winner, well done mate. Thanks to Dave Phillips*, George Perkins**, Steve Parker*** and Jake Woodard^ for the photos. 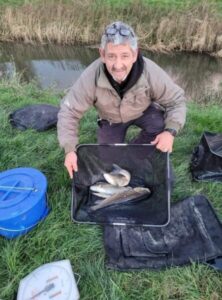 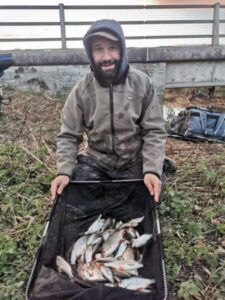 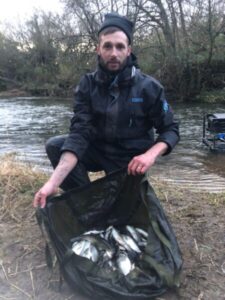 Jake won with the only double figure net of the day^

Elsewhere, Simon Garbutt had a nice day in 120, catching dace and chublets for 8lb 8oz, Neil Purchase had 8lb 2oz of roach from Hambridge and Les had 6lb 13oz from Midelney. Then the weights dropped right off and the rest of the field struggled, Parker ‘The Pole’ had 3lb 4oz to take a nugget off me and George had enjoyed his first match back weighing 3lb. 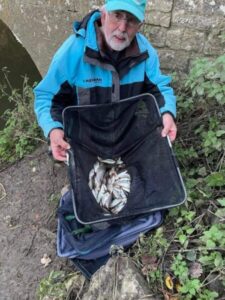 Les won his section with 6lb 13oz from Midelney*** 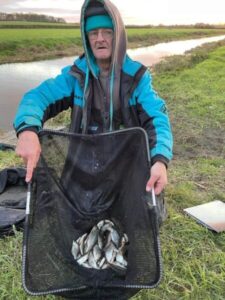 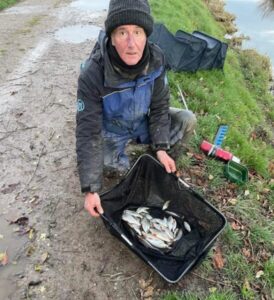 We all enjoyed some lovely hot pork and beef rolls with roast potatoes before the results and the prize giving. There was also a great prize of a bucket of goodies for a guess the weight contest which, along with the peg fees donated by the club, raised £82 for the British Heart Foundation. Andy Saunders won the bucket with the closest guess of 11lb 15oz, I went for 12lb 2oz so needed Jake to catch one more chublet!

I had a nice prize of a tub of Quality Street and a £25 voucher for some hooklengths from the Somerset Rig Company. 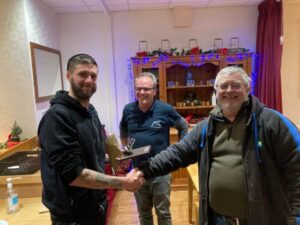 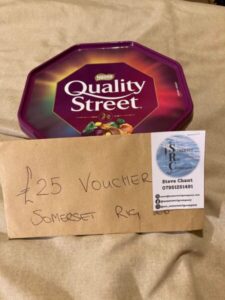 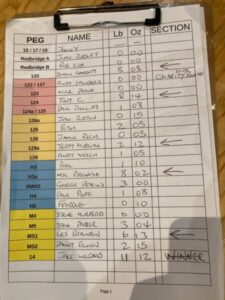 Full results from the day

I have to say, it was a brilliantly run match so a massive thanks to Terry for all his hard work and to anyone who helped get or donated prizes. Huge thanks again to Baz Morgan for his very generous sponsorship and to Charlotte, Drew and the team at the bowling club for looking after us (breakfast and the after match food were the best bites I had all day!). 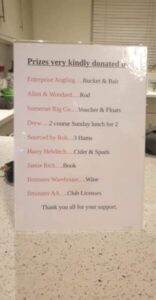 Thanks to everyone who donated prizes

I did manage to win nuggets off Andy Saunders and Hurf so the Nugget-O-Meter is up to £3 now for the charity pot. 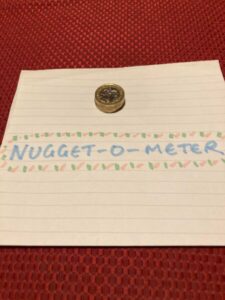 Looking at the results, five of the six top weights were either from weir pools or bridge pegs and I can’t see that changing much unless we get a lot of rain, so there could be some tough matches to come. Hopefully Santa will bring me a new drawing arm for Xmas!

Next up – Stoke Xmas Fayre