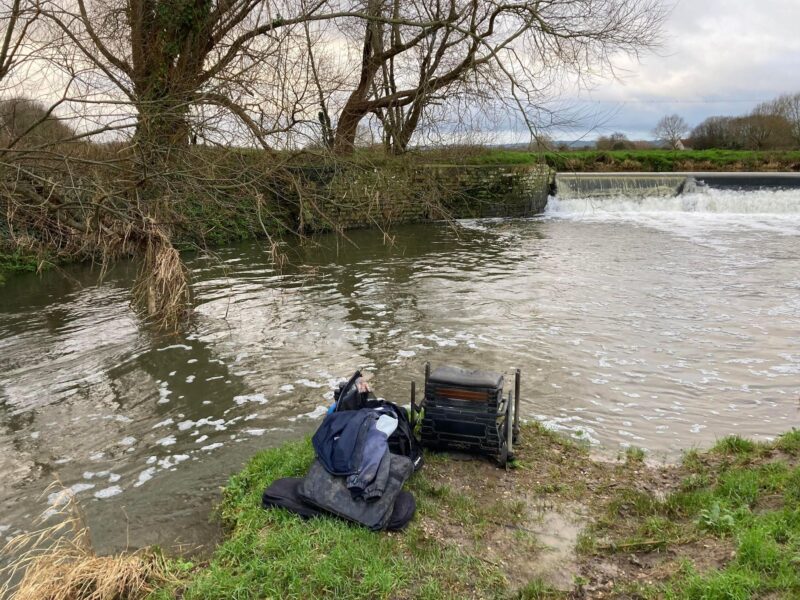 A New Year and hopefully a new drawing arm for the river! My day didn’t get off to the best of starts when I turned the alarm off twice and woke up an hour late. After rushing about like a headless chicken, I got to the bowling club and still just about had enough time to eat my breakfast before the draw.

With 20 anglers assembled, the ‘Wheels of Doom’ spun into action, my name came out quite early and I was dreading hearing the result but this time it wasn’t too painful and weirpool peg 120 was my home for the day. It can be very good and Simon G had 8lb 8oz off it in the Xmas match. After arriving at the river and yomping across two fields, I reached my peg and although it was pushing through somewhat, I still fancied it. 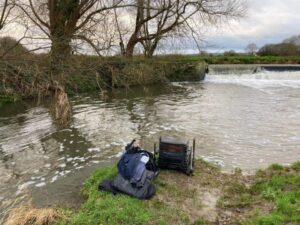 I set up two bodied floats, a 1 gram for the deeper water in front where it was a bit steadier and a 2 gram version for the tail of the swim where there’s a back eddy. Maggots, casters and Bait-Tech Super Seed Hemp were on the side tray. Plumbing up, I got the rig just right and then managed to get it tangled up in one of the overhanging branches, after much cussing and faffing about, I got it all back and made a mental note to be more careful.

The start time arrived and I shipped out with the lighter rig and double maggot, holding the float back and inching it through, it buried and a pleasing amount of elastic came out on the strike resulting in a nice 4oz dace. Next chuck I had a roach followed by another dace and I was in heaven (especially after recording a combined weight of 5oz from my last three river matches!).

After thirty minutes I had six fish and really thought I was on for a big weight and even though bites slowed up a bit I was up to nine fish for 2lb with an hour gone. Just when I thought I nice steady day was on the cards, bites just stopped, I wasn’t too concerned though as I’d been feeding the bottom of the peg and very often, that’s the most productive area.

Picking up the heavier rig and running it through the tail of the swim, I had two more dace quite quickly but it was short lived. Threading the pole between some trailing branches and holding the float back, I bumped what felt like a better fish and next chuck the same thing happened. I changed the hook and then bumped the next one too! As I shipped back, there was a swirl and a pike nailed the double maggot, I had it on for ages before it snapped me.

Back out in the deeper water, I had two small roach and gudgeon and then a bite next chuck saw me strike into a slightly better fish but the rig went around that same poxy branch as earlier, while I was trying to free it, a pike grabbed an easy meal. I did get the rig back minus the fish and hooklength. Two hours had now passed and I’d gone from thinking I could do a decent weight to really struggling. To compound my misery, the wind picked up, it started raining and for the second match running, I was getting it straight in the chops!

Fishing the tail of the swim again, I had a small roach and that bloody pike swirled for it but missed and then next put in, I’ve hooked a decent fish and this time the predator was successful and my hooklength box was taking a battering. I was beginning to lose my rag and swearing at the rain, the wind, the pike and the overhanging branches.

The river also came up a bit and the flow was all over the place, I tried all over the peg but just couldn’t get a bite now. With around quarter of an hour to go, Justin turned up, he’d been on 125 and packed up as he thought the match finished at 3:00 instead of 3:30. He said he’d struggled for around 3lb, while he was with me, I had a positive bite and struck into a fish and only went round that bloody branch again, by this time I’d run out of swear words. I did manage to get my rig back and Justin left me to it for the final couple of minutes.

My final tally was 18 fish, a really frustrating day and I still had the walk back to look forward to. John Dursley (who’d been on 112) arrived with the scales and said he’d caught a decent chub and a few smaller ones. My fish went 2lb 12oz and then John helped me carry some of my kit to his peg – cheers mate. He weighed 6lb 2oz and I said he might frame with that, as by all accounts the river had fished hard again. 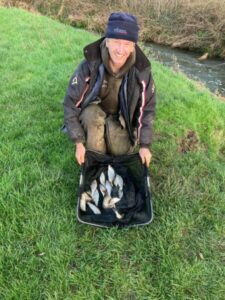 I had a frustrating day to weigh 2lb 12oz 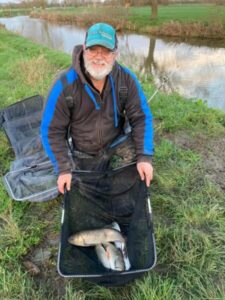 Back at the results and Jake Woodard had done the business once again, this time on peg H3a, to win the match with 15lb of roach and perch. Simon Garbutt was second with 8lb 1oz of roach from Barney’s Bend (126), Tony Coubrough was third with 7lb 2oz from peg 14 and Dave Pope completed the frame with 6lb 8oz, which included some quality roach and perch, from Midelney. Photo credits – Jake Woodard*, Simon Garbutt**, Rob Cox*** and Terry Morgan^ 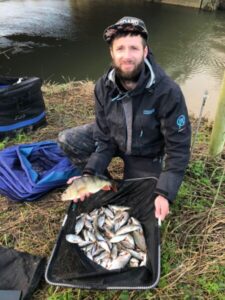 Jake won again, this time with 15lb of roach and perch from H3a* 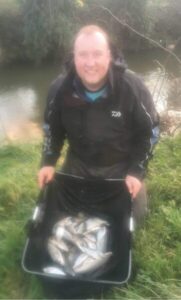 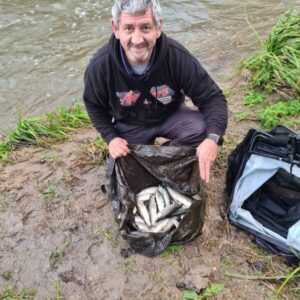 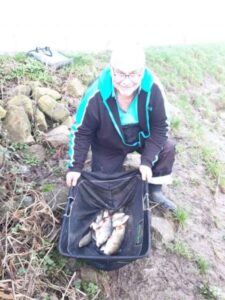 Elsewhere the river had fished really patchy, Danny Blunn had 5lb from Hambridge, Russell Hilton went minnow bashing and then had a very late bonus chub to win his section with 4lb 10oz from peg 124. Justin weighed 3lb 11oz, Ian ‘Bagger’ Burton had 3lb 5oz on peg 123 and Terry ‘The Toast’ won his section by triple default with 3lb from Midelney. Thanks to Russell Hilton^^ for the photo. 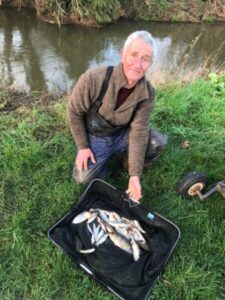 Danny B had 5lb from Hambridge* 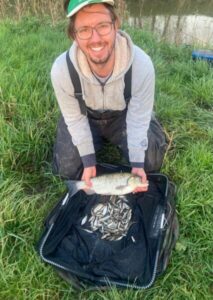 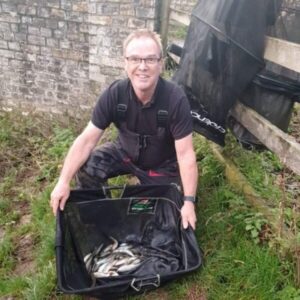 Terry had 3lb of roach for a cheeky default section win^ 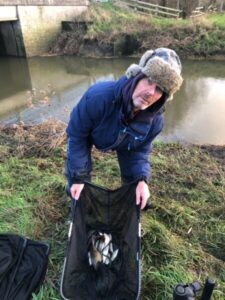 So I actually picked up £20 for the section plus a pound off Mr Parker and the charity Nugget-O-Meter now stands at £9. A disappointing day for me really, I finally drew a great peg and after a brilliant start, my match went downhill rapidly. I really don’t know what’s going on with the river at the moment, the roach seem to have done a disappearing act and the framing weights have dropped right off. 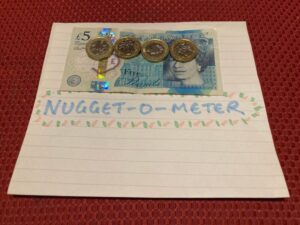 After five matches (and dropping the worst result) there are now no anglers left on a perfect score and we have a new league leader,

Here’s a list of the framing pegs (top three) from the eight matches on the river so far,