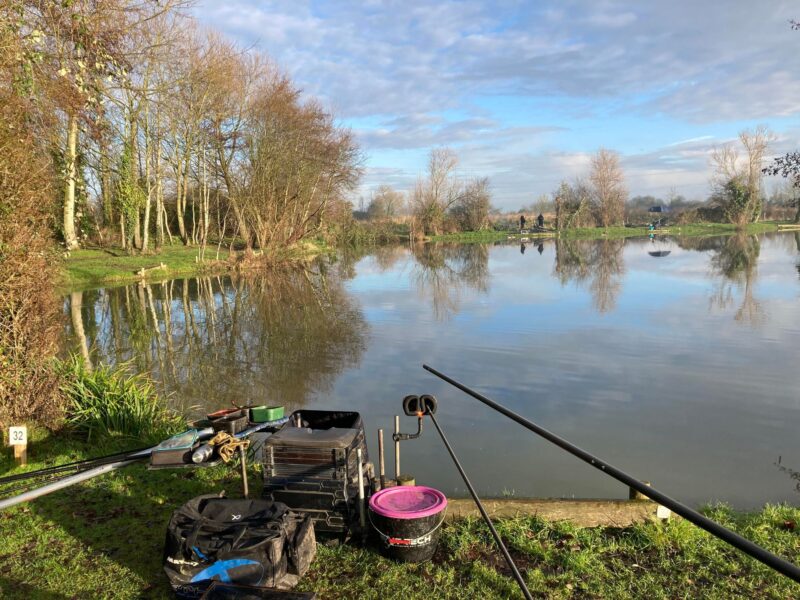 With no Ilminster or Stoke matches on this week, I booked into the silvers open at Trinity. It had fished hard the previous week with just 6lb winning the silvers and with three consecutive frosts leading up to the weekend, I could see it being difficult again although it was a few degrees warmer so at least we wouldn’t have to break any ice.

The Breakfast Club met bright and early before heading to Bridgwater and a different place for food. Some of the lads had been last Sunday and said it was very good but it was back to being a buffet this week and I have to say it was very disappointing and only lukewarm. I’ve been eating at lots of these Premier Inn type places over the last couple of years and due to the pandemic, they’ve been taking your orders and the food has been excellent and always piping hot. So not a great start and I hoped it wasn’t an omen for the day ahead.

A decent turnout with sixteen anglers fishing today, Tom got the draw underway and I was hoping to draw somewhere in the middle of the lake. When my name was called out I was a bit gutted when I got peg 32, one out of the corner on the near side where the Grand Wiz won the last match with 30lb of carp. Terry ‘The Toast’ was on 28, Parker ‘The Pole’ got 26 and Norts on 24 with Nick P on peg 7 on the opposite bank. For the side bets today we all bunged a nugget in the pot with a fiver for the top weight.

The pond was flat calm and although I expected it to be quite hard going I still thought you’d need 12lb to do well. Mark Broomsgrove didn’t offer me any crumbs of comfort when he walked by and said I was on one of the best carp pegs on the lake. I set up a 0.6 gram Drennan Pencil to fish two lines at 13 metres and then a 0.6 gram Guru Wire Pinger for a top two plus two line. On the side tray I had maggots (dead and alive), pinkies, casters, 2mm and 4mm expanders and Bait-Tech Special G Dark and The Juice groundbait. 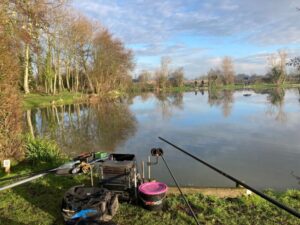 It was a nice day

On the whistle I cupped in a single ball of groundbait at 13 metres straight out and two at the same distance angled to the left. I also fed a few casters on the short line before starting long with a single pinkie on the hook. As expected, it was a slow going and with half an hour gone, I hadn’t had a bite or seen anyone around me catch.

Then I noticed Mark B over on peg 9 swing in a small fish and not long after Dave Evans next to him landed a decent perch on the waggler so hopefully a few fish were beginning to wake up. I missed my first bite which is standard these days. A further five minutes passed with no more indications so I tried the more positive line for the first time and after a little wait I had a lift bite and struck into a decent fish. It didn’t feel like a carp as I carefully shipped back but as I got down to the top kit, it woke up and after a short scrap where it didn’t give me too many problems, I netted an 8lb common.

Back on the other line, I had a small roach as the rig settled and began to get the odd small fish but I knew I would need skimmers if I was going to do any good today. Dave added another perch and was catching some roach as well but I couldn’t see anyone else catching much. Rod on my right only had a couple of small fish as had Andy and Nick opposite on pegs 6 and 7.

Another look on my left hand line resulted in carp number two tearing off but thankfully the hook pulled out. I didn’t really know what to do next, I needed to catch bream but I was also wary of putting too much feed in because of the carp and settled for just pinging out a few maggots. A few more little roach followed and I lost another carp from the left.

Next put in the float buried and once again, I was convinced I’d finally hooked a skimmer but sure enough it turned into a 5lb carp. With around two hours to go, I still only had a few ounces in the net and when I hooked yet another carp, I must admit I wasn’t enjoying it very much. The next bite resulted in more elastic out but this time I was sure it wasn’t a pond pig although I kept expecting it to wake up as I shipped back. It didn’t and a lovely 2.5lb skimmer came to the waiting landing net and all of a sudden I was interested again.

A small roach was next so I tried double dead red maggot and after a short wait, the float slid away resulting in carp number five giving me the run around before straightening the hook. With time running out and nothing to lose, I cupped in another ball of groundbait on both lines but the only further action came from a foulhooked carp of 4-5lb. I finished up with 14 fish (1 skimmer and the rest small roach for probably 3lb) and the final carp score was 3-3. Apparently the odd skimmer had been caught from some of the middle pegs and I thought Dave wouldn’t be far away as he’d had four decent perch, a skimmer and some roach.

When the scales reached me, Emma Drysdale was top on our side with 8lb 12oz from peg 25, followed by Luke F with 7lb 10oz from 29 and Paul Smith with 6lb 10oz from peg 21. Rod next door weighed 6oz and then my fish went 3lb 1oz. Round the other side Andy on peg 6 didn’t weigh and Nick had a skimmer and some roach for 1lb 14oz so it had been hard going at our end.

Then Mark B had done well on peg 9 weighing 7lb 11oz and Dave had 9lb 10oz but it wasn’t quite enough as John P on peg 13 was the only angler to break double figures with 10lb 1oz. Photo credit – Trinity Waters* 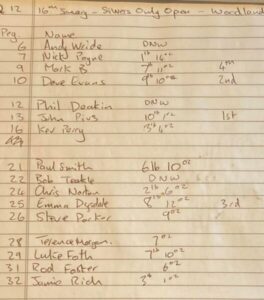 That just left the small matter of The Breakfast Club side bet. Terry ‘The Toast’ had 7oz (mostly small fish), Steve ‘The Pole’ had battered him with 9oz, Nick weighed just shy of 2lb and Norts had 2lb 6oz. So the charity Nugget-O-Meter received a fiver and now stands at £14. 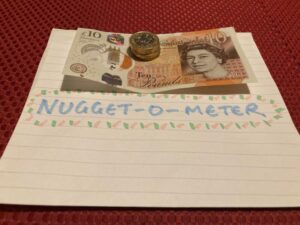