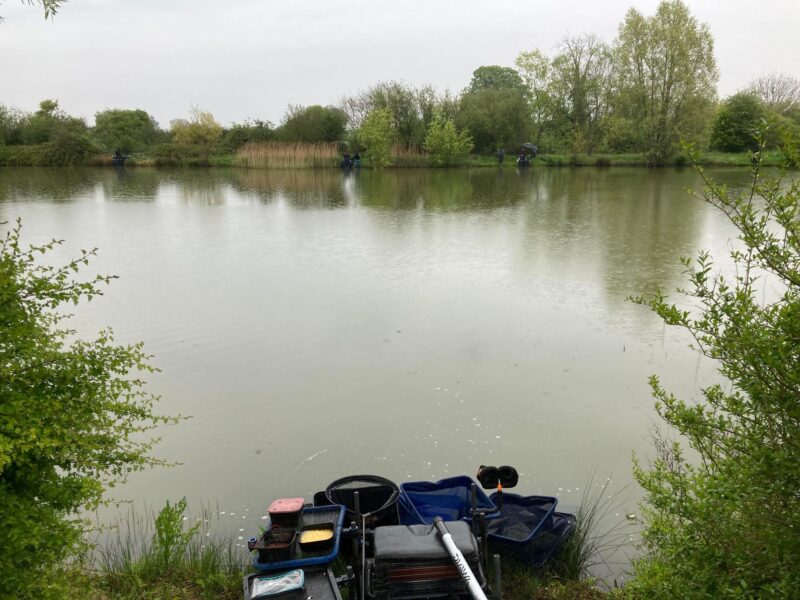 Another Bank Holiday weekend means lots more fishing, first up was another charity event at Hebditch’s followed by Summerhayes on the Monday and then I’d also booked Tuesday off to go to Revels. Most of us met at the bowling club for the obligatory breakfast (and very nice it was too) before we headed to the memorial hall in Stoke-sub-Hamdon for the draw.

Grand Wiz was officiating as always (even though he wasn’t fishing today) and placed the little plastic container containing the stapled peg cards on the floor, a few people dived in and I tried getting in there but Rob kept barging me out the way and said I could have the last one. There were actually two pegs left (as Jake hadn’t arrived yet) so I grabbed one and as I opened it, I couldn’t quite believe it when I saw the number three again! My favourite peg and I’ve now drawn it three times on the trot, I was almost embarrassed (I did say almost!). 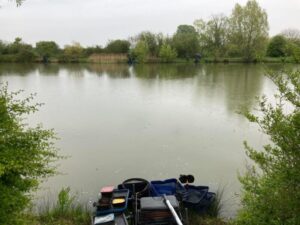 A few people commented that there would probably be a lot of copying and pasting in the blog for today and to be honest, they’re right as lots of things would be the same as the last match (hopefully the result would be as well!). I set up a 0.6 gram Drennan AS5 Pencil float to fish two lines at 11.5 metres, one with micros and corn and the other with groundbait and maggots plus a Drennan Crystal Dibber for fishing shallow (not used). On the side tray I had a couple of pints of reds plus some dead maggots, corn, micros, and Bait-Tech Special G Dark and The Juice groundbait.

It was raining steadily as we set up and I also didn’t get off to the best of starts when I sustained a near fatal injury opening a tin of corn but I manfully soldiered on! 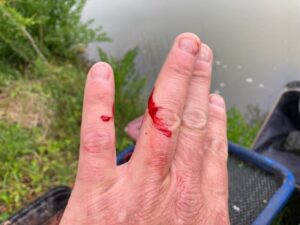 On the whistle I fed micros at 11.5 metres straight out and groundbait and dead reds at the same distance angled to the left (like last time!). Starting with corn hookbait over the micros, it didn’t take long for the float to go under and my first fish was a nice 6oz roach. Norts was into a carp quite quickly and most people seemed to be getting a few fish. I was expecting it to follow the same pattern as most matches here where you catch well for two hours before the whole lake switches off. I would then hopefully catch some skimmers and roach on maggot before playing my trump card and feeding a line in front the reeds on my right at 13 metres and having a late burst of fish (see the post from my last match on peg 3!).

Bites were coming regularly on corn although I’ve had several come off and after an hour I had six little pasties plus that roach but had probably pulled out of the same number and things weren’t really going to plan. Burnsey on unfancied peg 12 was catching really well and the front runner at this early stage. The second hour was much better for me and in amongst the smaller carp I began getting the odd better 3lb fish.

Then right on cue, the pond switched off and bites were at a premium. I tried maggot on the groundbait line but only had two little roach and was really struggling. Chanter wasn’t catching many fish but he was getting some decent carp and Burnsey was still doing well. The Grand Wiz turned up to see how we were doing and was keeping nice and dry under his big blue brolly.

With about two and a half hours to go I went on the 13 metre line by the reeds a little earlier than I would have liked. It took ages to get a bite there this time and it certainly wasn’t as good as the last match although I was putting odd fish in the net. GW stood behind me for a bit and I managed to hook and lose two decent carp in the reeds while he was there.

I finished up with about ten bigger carp and twenty of so ‘Ginsters’ plus a few roach and I really didn’t think it would be enough this time. The scales started with Terry who weighed 15lb 2oz on peg 1, Norts had 10lb 4oz and then it was me, my silvers weighed a magnificent 9oz before my little carp went 16lb and then the bigger ones added 34lb 13oz to give me a total of 51lb 6oz which was a little more than last time. 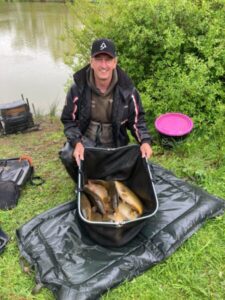 Rob was next and had some nice carp for 23lb 7oz, Jake weighed 9lb 3oz on peg 5 and then Sam had 4lb 4oz. Jenny had done well on 7 to weigh 10lb 15oz and then Bob weighed 6lb 14oz. Chanter only had six carp but they were decent fish and he just pipped Rob to go into second place with 23lb 10oz. 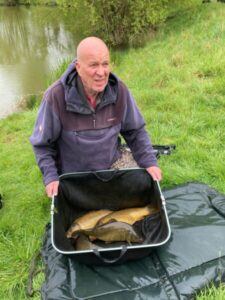 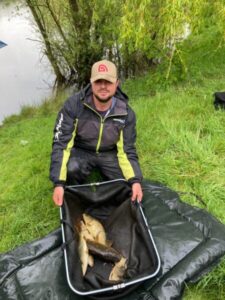 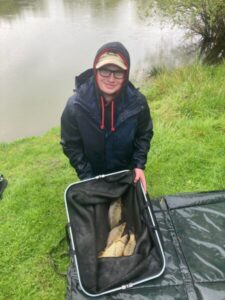 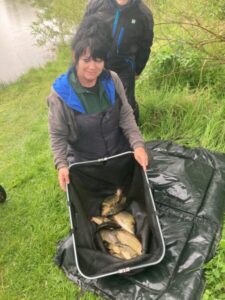 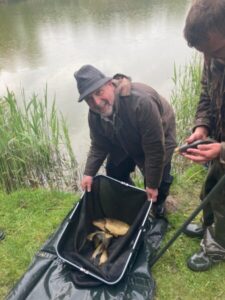 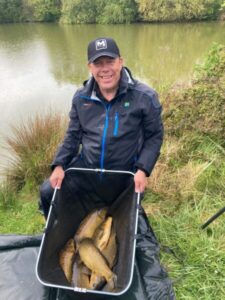 Steve ‘The Pole’ had chirped up a bit to catch 8lb 2oz of carp plus lots of roach, rudd and a bonus skimmer for 3lb 9oz which put him in the lead for the silvers pot. Harry on peg 11 weighed 21lb 5oz before we got to Burnsey who looked very cold and wet, he had 9lb 14oz of small carp and when he pulled his other net out, I could tell it was going to be really close and Norts called it at 34lb 13oz to give him a total of 44lb 11oz, a brilliant weight from that peg on the day which put him second again. 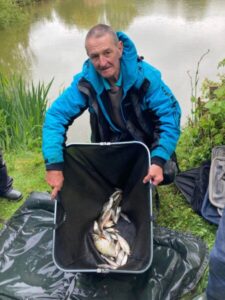 Steve ‘The Pole’ had 3lb 9oz of silvers 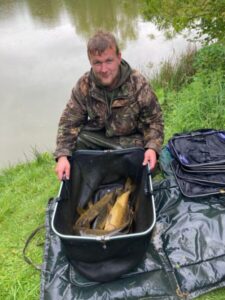 Harry won his section with 21lb 5oz from peg 11 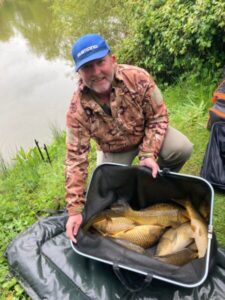 I picked up £50 plus £11 from our little super pool and along with nuggets from Grand Wiz and Steve P from last week, the charity Nugget-O-Meter had a nice little boost and is now up to £57. To be honest, I’d gotten away with it today, whereas I felt I fished a tidy match last time, the peg had flattered me somewhat today. 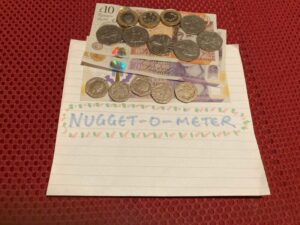 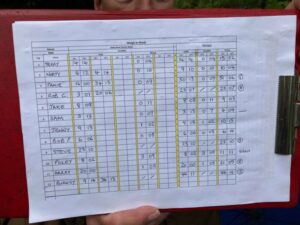 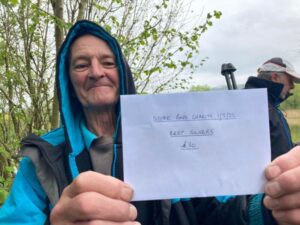 The anglers raised another fantastic £120 for the Oncology Unit at Yeovil Hospital and the running total now stands at a brilliant £270 after two matches. As always we would like to say a massive thanks to the Hebditch family for allowing us to use the pond, Charlotte and Drew at Ilminster Bowling Club for looking after us in the mornings, Chris White for his faultless organisation and of course the anglers for their continued support.