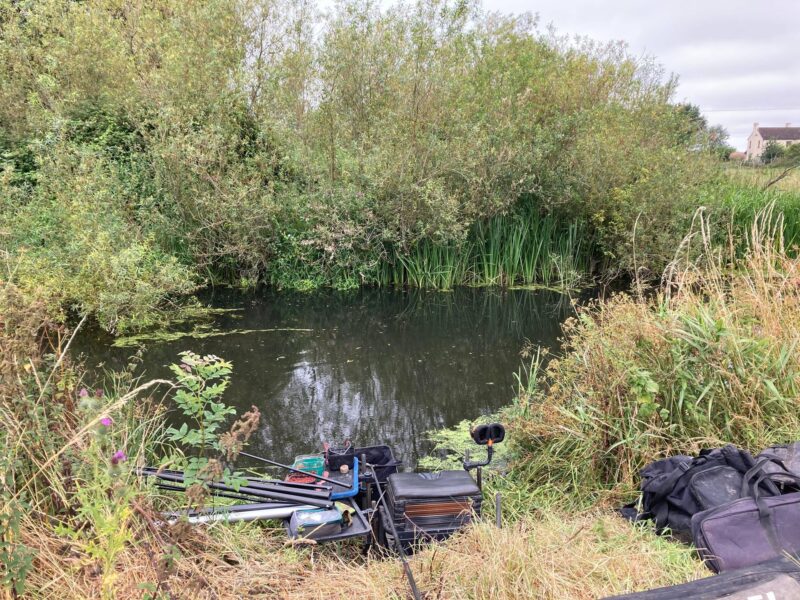 We were at Kingsbury for the third Stoke river match and with the weather forecast set to be a little more agreeable I was really looking forward to it. After another of Charlotte’s excellent brekkies we headed to Martock for the draw. There was a great turnout of 16 anglers and Bob let us know where all the pegs were and then people started delving into the bucket of doom. I really fancied peg 8 (the first one below the bridge) but pulled out 15 towards the end of the match length.

Cliff got the one I fancied and elsewhere Russ drew peg 3 above the bridge and wasn’t impressed. The Grand Wiz was on 13 which produced some good weights last year, Bob was above me and Wayne Cooper was downstream on the end peg. My swim looked lovely with lots of cover across and there was the odd fish topping. 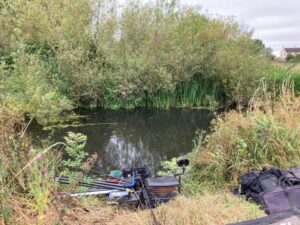 I set up three rigs, a 1 gram bodied rig for down the middle, a 0.5 gram DH16 for fishing across with 0.14mm to a 16 B611 and another identical float but with 0.10mm to a size 20 Guru Match Special, the usual maggots, casters and hemp were on the side tray.

The whistle went to get us underway and I cupped in some hemp with a few casters down the middle before starting with the heavier rig and single red maggot. First put in I had a positive indication which resulted in a nice 6oz chublet, next chuck I had a gudgeon followed by another chublet and it was a bite a chuck. I was laying the rig in and several times small chublets have nailed the bait on the way down.

After half an hour I had 15 fish (chublets, gudgeon and a couple of roach) for around a pound and I’d gotten off to a great start. Bites kept coming and I had more gobies and little chublets plus a cracking roach around 8oz but I knew it wouldn’t last. I could also foresee a looming problem, with hardly any flow there was quite a bit of scum building up in the swim and I was struggling to get my rig through it without getting crap on the hook.

Going into the second hour, my bites began to dwindle so I picked up my beefy rig to have a look across in an inviting bay in the reeds where I’d been flicking casters and hemp from the start. I was fully expecting to catch a couple of chublets quite quickly but I haven’t had a bite there. Back down the middle and the rest had done it some good as I added two more gudgeon but then had a foulhooked stickleback!

The scum was now being a real pain and I was literally having to try and find a hole in it to drop the rig in. I had another stickleback, fairly hooked this time and then out of the blue, I had a chunky 3oz roach so they were there but just not really having it. Neil P turned up for a walk and reported that nobody was really bagging with a few admitting to 2lb or so, while he was with me I had another foulhooked stickleback which is never a good sign, I wasn’t even having minnow problems!

The remainder of the match was painful if I’m honest and all I added was two more gudgeon from 10 metres down the peg. My final tally was 33 fish (chublets, roach and gudgeon) plus a few minnows and those sticklebacks. I packed my kit away and walked up to watch the weigh in and get some photos.

As I got above the bridge, the scales party of Chris D and Norts had already weighed in a few and looking at the weighboard, Russ was leading with 4lb 10oz of quality roach (not bad from a peg he didn’t fancy!), the other pegs had been a bit of a struggle, Dave Hilton on peg 1 had weighed 1lb 10oz, Norts had 14oz and John S weighed 10oz. Thanks to Russell Hilton* and Chris Norton** for the photos. 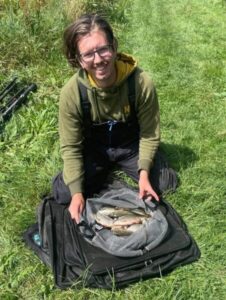 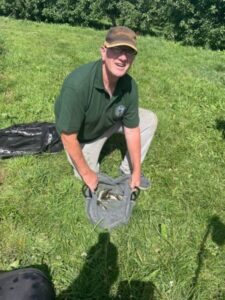 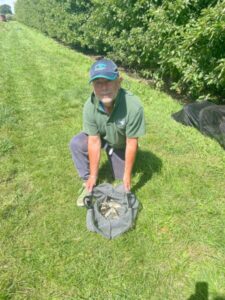 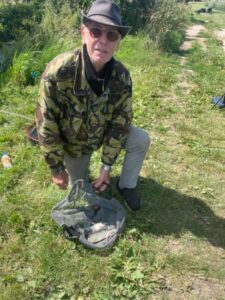 Jenny also had 10oz, Chris D weighed 12oz and then Derek G had 1lb 1oz from peg 7. Cliff on the peg 8 below the bridge weighed 2lb 1oz, Rob Cox on 9 had 2lb 3oz, Mark D had a nice chublet in his 1lb 6oz and then Tony C went into second place with 3lb 1oz which included a perfectly formed mirror carp of an ounce! (was that the beast The Grand Wiz lost at Parrett Works in the first match?!). 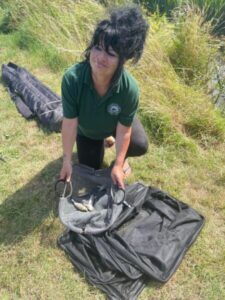 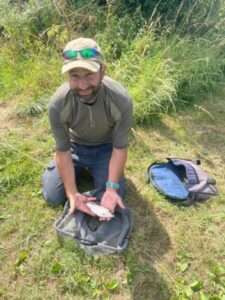 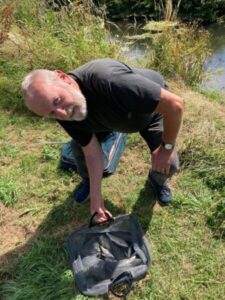 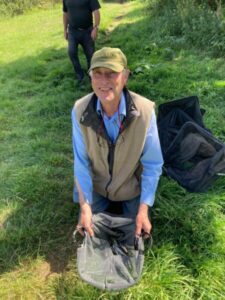 Cliff weighed 2lb 1oz on peg 8 below the bridge 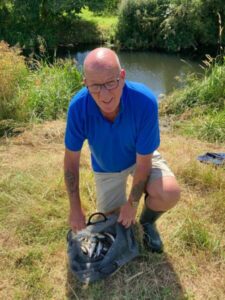 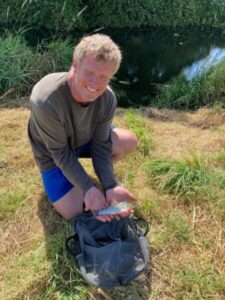 Mark D had 1lb 6oz including a nice chublet 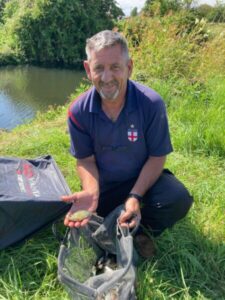 Nick P on peg 12 had 1lb 11oz and then the Grand Wiz went into third spot with 2lb 14oz, Bob N weighed 2lb 2oz and then my fish went 2lb 9oz. Last to weigh was Wayne C and he had some quality fish for 3lb 4oz and second place on the day. 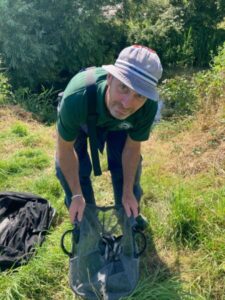 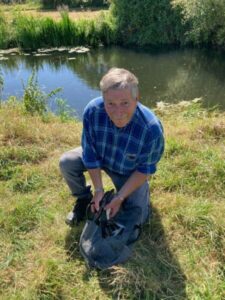 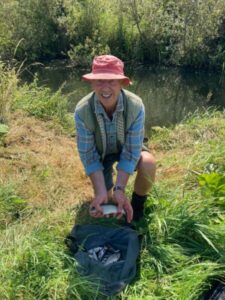 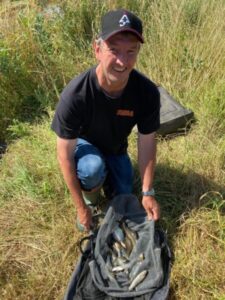 I had 2lb 9oz of chublets, roach and gudgeon 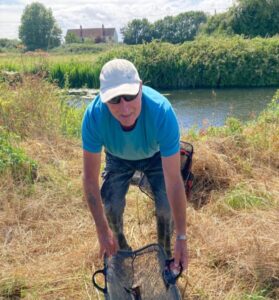 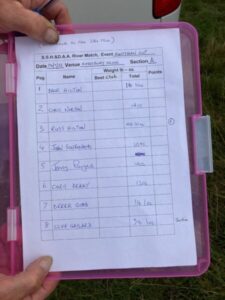 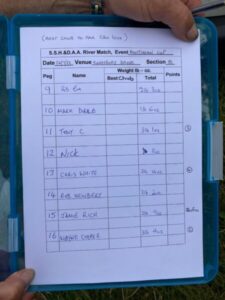 Another really close match with ounces separating second place and fifth and just over a pound between second and eighth. It’s not everybody’s cup of tea but I find it fascinating fishing, basically if you catch 3lb, you’re in the frame and I firmly believe that’s achievable from the majority of pegs. I picked up £20 for winning the section and the Nugget-O-Meter benefitted by £9 as once again Nick wouldn’t accept payment for the bait and The Grand Wiz donated the side bet nuggets, very generous chaps, thank you. The total now stands at a brilliant £142 and there’s still a few months to go. 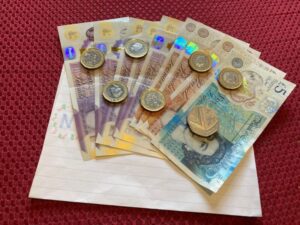