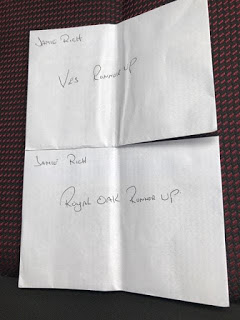 I always look forward to Barney’s Pairs Open and as per usual, it was well attended, with 18 anglers fishing this year. With Steve and Cindy back from an amazing trip to New Zealand, we met at the Oak for the draw and breakfast. Most of the usual crew were in attendance and it was also lovely to see Dean Morrison and Paul Adams again. The day got off to a good start for me when Rob handed out the envelopes for the V.E.S. Precision and Royal Oak leagues.

When everybody had arrived and finished eating it was time to draw and Rob called one person from each pair up to draw and Justin said I should do it. I pulled out peg 7 at Dillington for him which is where he won the open from, so he was happy and then peg 3 at Harry’s for me, which put me on the far side towards the end, not the best of areas and I’d have preferred to have been on the near side. The reed bed fliers had been left out today but I thought the next pegs along would be hard to beat and Harry and Rob were the lucky anglers to draw them.

We got out the pond and it took me two trips to get all my kit round to my peg, I had Jake on my left where he was second the last time we fished here and Rich S was on my right, it was pretty windy for everyone with the exception of Rob who’s peg was fairly sheltered, Karl and Steve P were getting the worst of it up the far end. I set up two rigs, a 0.4 gram Drennan Carp for fishing three lines at 10 metres and a Carpa 2 for fishing the margins left and right, both rigs had size 16 Kamasan B911’s to 0.12mm.

On the side tray I had some Bait-Tech Coarse and Carp 2mm micros that I’d soaked the night before with water infused with ‘The Juice’ and corn and dead maggots which I covered with water and gave a good glug of the same. I was ready with 15 minutes to spare so had a chat with Jake and a few others while we waited for the start time. Rob shouted the all in and I cupped in half a pot of micros with a few grains of corn at 10 metres straight out, a full pot of micros and some corn at the same distance to my right and micros and dead maggots to the left before feeding the margins and then starting straight out with corn on the hook. The rig settled and after a couple of minutes, I had an indication which I missed and I thought there must be a few fish there but next chuck the float just sat there!

Harry was into fish straight away, fishing up towards the reed pegs and Dean next to him was soon off the mark but after twenty minutes, I hadn’t seen anybody else catch. I had tried corn on all three of my longer lines but no more bites, so I put two dead reds on and went over the maggot/micros line. Jake and Rob both had a fish and I thought surely it was only a matter of time before I latched into one. I tried straight out and then the right hand swim and after half an hour I finally had a bite and landed my first carp. I then foul hooked a fish briefly but any thoughts of bagging up soon disappeared and by the time the first hour was up, I’d only added one more carp.

Nobody was really bagging and after flying out of the blocks, both Harry and Dean had now slowed up. My next two fish came from the middle line and I thought it would be a case of nicking a couple of fish off each line before moving but despite rotating around all three longer lines, I had no more indications and ended the second hour on four fish. I potted in some micros before trying the margin swims but no indications and I didn’t stay there long. Rob had a couple more fish but Jake was still on one and it was looking like it was going to be a hard match. Two more fish in the third hour from the right hand line and I thought I was doing okay and gaining ground on Harry and Dean, then I saw Rich S land a fish on the feeder and I shouted up to ask how many he had and wasn’t expecting him to say he had twelve as I hadn’t seen him catch up to that point!

Despite trying the other two ten metre lines, the only place I could get a bite was from the right hand line on double dead reds with quite a few bites coming after I moved the rig slightly. Karl came for a wander and said Steve and him only had a single fish each and that Harry was on eleven, I was on nine and had number ten while he was sat with me so although it was looking like Rich would win the lake, I was still in with a shout of a decent result.

I could see Rob was getting odd fish but I didn’t think there was much between us, I did bump a couple of fish but was fairly pleased when I ended the match on fourteen and thought I probably had around 35lb as they looked 2-3lb apiece. I packed up and walked up to grab some photos of the weigh in, Rich said he had twenty two carp so I thought he’d top the lake. Tony was first to weigh and had 6lb 8oz, then Rich had 28lb 9oz and his carp had been on the small side, I was next and it looked like it was going to be close but after two weighs I was just short with 28lb 1oz and way off with my estimate. Jake had 8lb 4oz and then Rob said he had nineteen carp and when he pulled his net out, they were decent fish, after three weighs, his total was 42lb 14oz which put him in the lead.

Then it was back to the pub for the results to see how our partners had done, it had been hard going for most at Dillington with Adie needing just 8lb 11oz to win the lake, that put him and Rich on three points but Baz was second with 7lb 9oz which meant him and Rob also had three points but they won it thanks to a superior weight advantage. Justin was third with 5lb 15oz so we ended up in third place overall and picked up £25 each. Thanks to Steve Hurford for the photos*

Steve and Cindy laid on some lovely food for the anglers and it will be the last time as they have sold the pub and the club and all the anglers would like to say a massive thanks for looking after us so well and for all their support. Thanks also to Rob for running another great match and to the Hebditch family for the use of their pond. As always the peg fees are donated to a charity of Harry’s choice and this time it was Moorfields Eye Charity, a fantastic cause. Everybody put some money in the collection, including Steve and Cindy and Hurf went round the pub with the charity box which added a fair bit more and the proceeds of the Sunday night quiz also went in the pot and the total raised was £215, just brilliant.

If you’d like to donate to this brilliant cause or find out more about it, just go to the link below,

I’m not sure where I’m going next week yet but come back next Sunday to see where I end up and stay tuned for some more great interviews and reviews. Also I used the Tinca Fishing XChange landing net for the first time today and I’m well impressed so far.