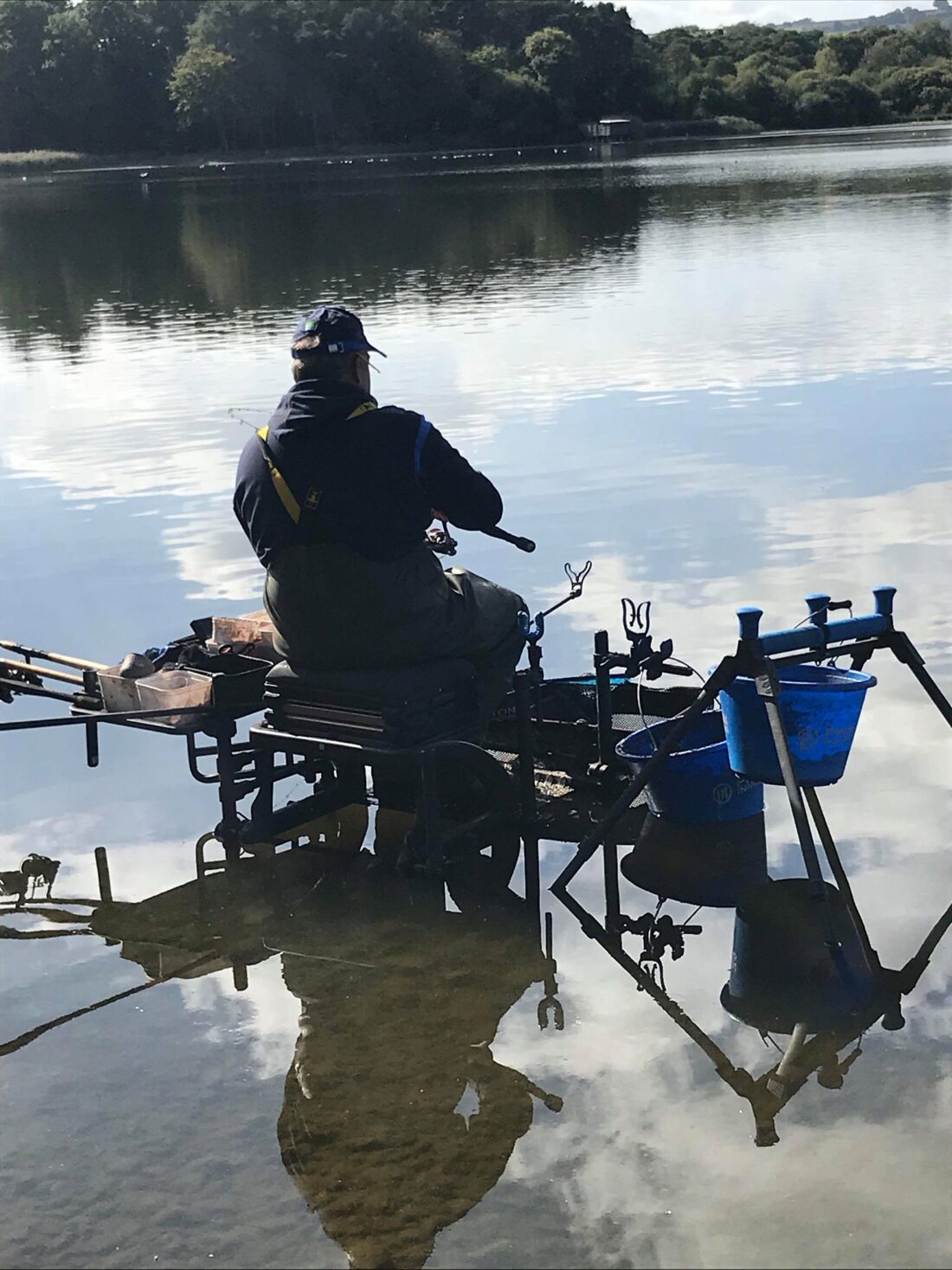 In my last post, I looked at luck and the part it plays in match fishing and things you can do to swing the odds in your favour. I touched on the fact that given all the variables, it’s all the more impressive when you see the level of consistency some of the top anglers perform at. Within match angling you have different abilities from club anglers through to those that represent their countries, with many different levels in between.

It’s those at the very top of their game I want to talk about here, the likes of Des Shipp, Andy Power, Steve Ringer and Will Raison. Just what makes them so good? That really is the million dollar question and not one that is answered easily,

well, yes and no, if it were that simple, we’d all be jacking in our jobs and becoming full time anglers but there’s more to it than that, yes they all do the above but they also all possess a kind of fishy sixth sense and just seem to know when a bait or method will work and when to change when it doesn’t. There are two elements to the holy grail of fishing and they are feeding and presentation, get those right and you will catch fish. Of course this doesn’t guarantee you success because, as I mentioned in the last couple of articles, if the fish ain’t there, you can’t catch them!

Somebody commented on one of the recent posts and said one of the reasons the top anglers are so good is the fact they adapt and that’s spot on, they seem to have this uncanny sense of exactly when to change something while the rest of us are still thinking about it! I love reading Des’s little match reports on Facebook, very often he mentions a little tweak in his feeding or a subtle change of rig and these are the things that make all the difference. He’s always looking to catch bigger fish or up his catch rate and anglers of his calibre always make it look so effortless, if you watch some of the big names, on the surface they don’t actually look like they’re doing much different from us mere mortals and they’re not, they’re just doing it better than us!

There’s always something going on in their heads as they look two or three fish ahead, they’re priming different swims so they always have somewhere to go, it’s quite a difficult skill to keep several swims fed religiously throughout the match, how many times have you been catching well and you think it’s going to last the duration so you neglect the other lines but then it dies and you have nowhere to go. Or you plunder one line, not wanting to leave feeding fish and you kill it stone dead, the top boys don’t have that problem as they instinctively nurture different areas of their swims, sometimes not even fishing them, other times they’ve left a line alone until the last ten minutes when they get those crucial couple of bonus fish that make all the difference.

Let me give you a couple of examples, there was a charity match at Summerhayes with a big turnout that included Des and to the best of my knowledge, although he’d done a coaching session there before, it was his first match. Admittedly he drew a decent peg but he did what he does best and won the match comfortably (and that was with him going over in one of his nets!).

More recently, he fished a two day mini-festival at Chard resi, a venue he hadn’t fished for over 20 years, on the first day he drew a good area for bream and won with an amazing 103lb of bream, that was impressive but his 44lb of roach on the second day was even more so and he won the event with perfect two point score. He spent an hour fishing the feeder before switching to the pole, while the majority of the field stuck it out for bream (well after the first days results you’d expect them to dominate again wouldn’t you?) but his sixth sense kicked in and he fished for roach. He actually finished third overall on the day, less than a pound off the second placed bream weight. 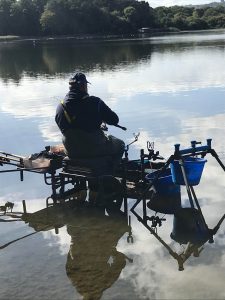 Des bagging on the resi 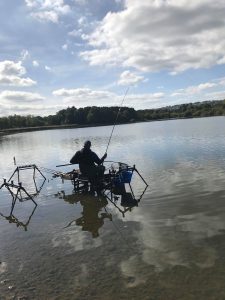 Another one in the net

He then headed to White Acres for the Preston Festival, where he started off at Porth with a lake and section win with a fantastic 58lb of bream, he followed that with four section seconds to give him 33 points, yet another top ten finish and a place in the Parkdean Resorts Masters. That level of consistency is frightening and talking of consistency, you don’t have to look any further than Jamie Hughes or Andy Power, the number of big money finals they’ve been in, is incredible, that doesn’t happen by accident. Just to qualify is a major feat, beating a top quality field in a big match once is an achievement, the number of big final appearances these guys have racked up is jaw dropping. The thing is, these guys do it all over the country at a wide variety of venues, one day Andy is qualifying for a big money final on a commercial, the following day he’s winning on the Bristol Avon.

I was also lucky enough to watch Will Raison filming a feature at Chard resi recently and on a bright, flat calm day following a two day festival, it was a bit of struggle to catch bream. I watched him for a couple of hours and although he wasn’t catching much, he was constantly trying different things. Now, most people might try different hook baits, start a new line, experiment with the feed we were putting through the feeder, even scale down our hooklengths and hook size before concluding there were no bream there, Will did all of this and more. I watched him for a couple of hours and he must have reached for his hooklength box half a dozen times, he was always trying to make something happen. 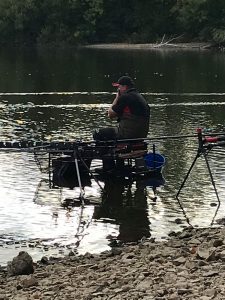 Will on the resi 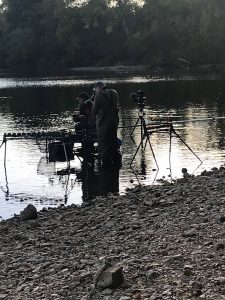 Craig ‘Trigger’ Edmunds is another amazing talent, you very rarely see results from the Viaduct without his name somewhere near the top, the sheer number of wins he’s totted up is incredible. He’s won Tony Rixon’s Float Only League four years on the trot and the calibre of anglers fishing that it is very high, he’s certainly no slouch on silvers either winning the first round of the Viaduct Silvers League before he headed down to White Acres (editors note – he’s just won round two as well, not bad considering they are 50 plus peg matches!).

He ended up in seventh place and then only went and won the Parkdean Masters along with the £25,000 that goes with it to top off an amazing year (and it ain’t over yet!) which also saw him sponsored by Mosella, Malman Floats and Spotted Fin along with signing for Daiwa Dorking. This guy is only going to get better which, quite frankly, is frightening.

The bad news for the majority of us is, that you can practice and practice and practice until you are at a comparable level of technical ability and you can spend hours and hours prepping until there is no more prep to do and you can become a very good angler but you’ll never have the extra little ‘something’ that these guys have. You could sit them down and ask them but I doubt they’ll be able to tell you why they do some of the things they do, of course experience counts for a lot but it’s more than that. I can only liken it to the genius of footballers such as Messi, Ronaldo and Hazard or maybe the sheer snooker brilliance of O’Sullivan in that no matter how many hours you spend practising on the pitch or the baize, you can become very good but you can’t learn what makes them special.

Now before you all become disheartened, the beauty of our game is that the football pitch isn’t always level and there aren’t always the same number of balls on the table so on the right peg on the right day and providing the pressure doesn’t get to you, there’s a chance you could beat one of the stars of our sport off the next peg and that’s as good as (nearly!) nutmegging Messi! But be warned, those occasions are the exception to the rule.