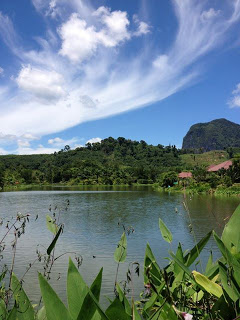 Scotty was itching to go back to the lovely Gillhams Resort in Thailand and I needed no persuasion for a return trip so this year we decided to go in May as we’d never been at this time of year and it was also the only time slot Scott could find in his busy match schedule. After a lot of travelling it’s always lovely to see the sign at the entrance to the resort and after a couple of beers it was time to relax before grabbing some food and having a relatively early night.

We were up bright and early and as always the scenery and views are stunning and we soon had the rods out, we’d taken some different baits to try and Bait Tech had very kindly let me have some of their new pop ups to. After only 45 mins I had a slow run on two pink Sweet Coconut pop ups and was into a decent fish. The fish grounded me and Jut the guide swam out to put some pressure directly above it, after several more groundings it became apparent I’d foul hooked one of the venues big stingrays. I eventually got it within netting range where the guides could start to handline it but the pressure eventually saw the line snap and I lost the rig and everything – not a great start.
﻿﻿

With the weather really hot, we weren’t getting many indications and Scotty was soon reaching for a waggler rig to fish pellet up in the water and was into an angry Mekong catfish which snapped braid like cotton after a 30 minute scrap. We had no more action during the day but as night started to fall, Scott’s hooked into an arapaima on a deadbait and just as the fish was nearly ready to be caged, the hook pulled out! I did manage a small redtail of 33lb to get off the mark.

The second day saw us determined to do better but it was tough going with the only action being Scotty losing another Mekong on the float. The third day saw me blank again but Scotty had a nice Siamese carp of 50lb to get on the scoreboard as well. We changed swims for our fourth day and it looked like our luck had changed as well when I landed a Siamese carp of 38lb and then Scotty had one of 40lb followed by a new pb of 62lb. We had a day off the next day so went out for a few beers in Ao Nang. After a couple of days Scotty came down with a nasty cold which came with a horrible cough and I really felt for him as he was pretty rough for the entire trip.

We were on the move again for the next days fishing, with Scotty in the end peg (G3) where the arapaima tend to show a lot and me the next peg up, Scott got off to a great start with an ‘arry of 75lb first chuck but things got even better after we got back from having a lovely breakfast when he latched into one of the beasts and after a lengthy battle, a huge fish was caged. The guides estimated the fish at 360lb and it was a fish of a lifetime for Scott and he was over the moon. For good measure he added a third of 180lb and he still had the evening stint to look forward to. But as night fell, Scott’s swim went quiet and I started to get some action. I had a redtail of 28lb before losing three ‘arry’s which straightened the hooks out, the power of these fish has to be seen to be believed! I did manage to land one of 60lb before the all out was called at eight ‘o’ clock.

We swapped swims the next day with me in the hot peg on the end and I was hoping I might latch into some ‘arrys. During the day it was again tough going but I did have another Amazon redtail of 45lb on a Bait Tech pop up with a fishery pellet. We awaited darkness and I had two screaming runs on dead baits that nearly pulled the rod pod over but lost them both when the hook or braided hooklength snapped and I was starting to think I wasn’t going to get a big fish out.

Also the match boys arrived in the form of Tony Wynnick of Burt Baits, Garbolino’s Richie Hull, Maver’s Steve Mayo and their mate Micheal. These boys like a drink and I had a couple of mad nights out with them which resulted in getting back around four or five in the morning! They can also fish a bit and Steve enjoyed some Mekong and Siamese action on the float although he lost a few as well. He also had a cracking arapaima of 300lb, not to be out done Tony had a nice ‘arry of 170-180lb although he lost a bigger one at the net. He also played a big Mekong for over an hour without seeing it before losing it. Richie had a big Mekong of 160lb but on a day trip got stung by a jellyfish and I don’t think he had a lot of sympathy from the lads! Michael had some nice fish including a bighead carp which is a species I would love to add to my list. Check out their Facebook pages for some great video footage of some huge fish.

We both stayed in the same pegs the following day and it was quiet during the day with Scott the only one to catch with a 55lb Siamese. As night started to fall, my fish rod screamed off and I thought I was going to lose yet another monster but slowly but surely I was starting to win and the guides managed to cage a lovely arapaima of 240lb. I went up to watch Scott for bit and calm my nerves when his bite alarm went off and he had to get in the water to follow the fish and it was eventually caged below my swim and the guides estimated it at 170lb. I went back to fish but wasn’t holding out much hope after all the commotion when I hooked another that snapped me straight away and that was enough for me, my nerves couldn’t take anymore. Scott had another of 145lb and he’d now landed five arapaima, his record with the Mekong’s still wasn’t looking good though!

That night everybody headed out to the lovely crispy pork restaurant and after, me and Chris Pache (one of the guides) headed to Amy’s bar for a few bevvies. Me and Scotty had another day off fishing the following day, so went into town and had a lovely massage (not that sort you mucky lot!) before doing a bit of shopping and meeting up with the match boys for a couple of beers and a game of pool. Our next days fishing saw me blank again although I did lose a fish which smashed me up and was my own fault for not checking the clutch! Scott also lost a fish but did catch a nice carp of 40lb. We both blanked the next day but Scotty lost another fish.

We had another relaxing day before our last day arrived (where did the two weeks go!), I was a little late getting to my swim and as I reached Scotty’s peg, he was playing yet another Mekong, he was wearing a rather fetching lifejacket as he’d already followed it up and down the lake and it was still showing no signs of stopping. After a two hour battle, Scotty was knackered and so was the fish which was eventually netted, it was a 160lb Mekong hooked under the chin which might explain why it was so angry! I was starting to think I was going to blank again but as the witching hour approached, I’ve hooked into a fish which I thought might be a redtail but turned out to be smallish ‘arry of around 60lb, it was just about to be caged when the hooked pulled and I was gutted because I’ve never had three arapaima in a trip yet.

Time was running out when I’ve hooked another fish but the hook pulled out and it was starting to feel like the fishy god’s were against me. Joel the guide was sat with me and about to call the all out when my rod screamed off again and I was into another big fish. After a tense 30 minute battle, the guides caged another lovely arapaima of 180lb and I’d finished the trip with a flourish and managed a third arapaima for the first time.

The fishing had been a little tough compared to other trips but we’d still had seven fish over 100lb, topped by the 360lb fish for Scotty and one of 240lb for me. No new pb’s or species for me but Scotty set new pb’s for arapaima, Siamese carp and Mekong catfish. I don’t know whether it was the time of year or the fact that the fish are wising up a bit, the fact that specimen type anglers were getting some more action could be down to all the little tricks they know whereas we stuck to the approaches we’d used other years. The bagging float method would get you bites from Mekong’s and carp but after my three hour plus battle with a Mekong last year, I try and avoid them.

It’s an amazing place and I’ll definitely be back, I met some lovely people again and I can’t go without mentioning Carston from Greenland who apparently wrestles polar bears for a living (don’t quote me on that!), Gary Newman (no not that one!) who is a consultant for Drennan and really knows his stuff, Terry and Tracey who we also met two years ago and of course Terry ‘Poppa’ Eustace as I never tire of hearing his stories over dinner and a Sambuca or two. This year Terry brought his mate Del over for the first time and they were just like the odd couple, very funny.

Stuart and Benz, Sean and Noi and Becs look after you so well along with the guides, Joel, Chris, Jut, Rob and of course the infamous Golock. Also there was Jonathan Salisbury who did some work experience last year and is now back working, a smashing lad who takes some great photos (even if he was a bit too fond of nail varnish!). The 300lb arapaima and 100lb carp eluded me this time but I’ll get you next time and as for you Mr Pacu, you may be my nemesis but your days are numbered!

We had a nightmare journey back where the flight was delayed by several hours due to a fuel problem and we were all taken off the plane and had to wait while a new one was readied and then after arriving at Heathrow we had to wait a while for the car to be delivered and then got stuck in traffic for ages. I’m well and truly back to earth with a bump and missing Thailand already, the place and people are amazing and I can’t wait to go back.

Well next up for me is a Spring League at Perry St and as Les couldn’t get anybody to fish for me last week, I’m slipping down the rankings and I had one of my corner pegs last week too!