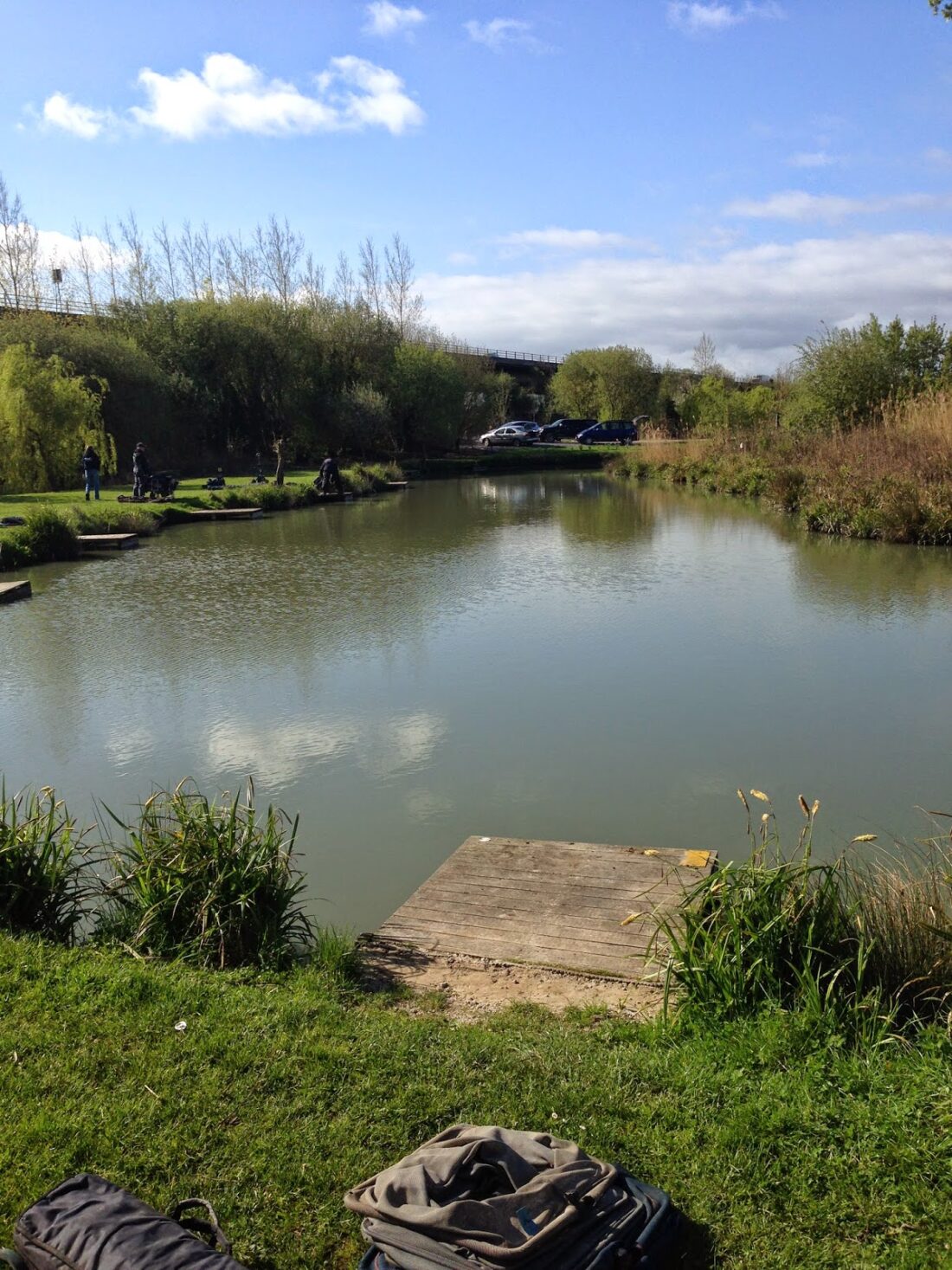 I hadn’t heard from the Torquay Tart for a while but with the weather now starting to warm up, the texting started about how he was going to own me and I needed to buy some Savlon cream for my arse which was going to get whipped yet again. I did reply saying I still had a tube of cream unopened from last year when the side bet score finished at 5-1 to me! The weather looked gorgeous when I woke up and I was looking forward to this, I picked Janders up and met Rob Cox before heading to the venue.

On arriving, the car park was already quite full and it looked like there were a fair few fishing today, along with the regulars, Scotty had brought Guru’s James Cooper, a really nice guy that I’ve only met on a couple of occasions. The Tart was also there and we confirmed our side bet would be on silvers and so did Glynn Wickham, Janders wanted it on overall weight as did Rob Cox, Reece and Rob Kingston, this could get expensive!

Pete announced there were 29 anglers fishing today and he would be paying the top five overall and the top three in silvers. With so many pegs taken I just knew it would fish hard today, I was hoping for pegs 30-35 or 9-12 but managed to pull out peg 14 which is a really good carp peg as it’s in a corner. I would still fish for silvers but would have to feed a carp line as well. Janders pulled out peg 12 and wanted the bet to be on silvers now! The Tart was in peg 9 so I would be able to keep an eye on him and I had Ray Wickham on my right and Steve Kedge on my left in peg 15 where he’d won on Wednesday so I could be in for a spanking today!

I set up the usual two MW F1 Slims but also set up a little Trabucco dibber for fishing the margin to my left towards the corner, the reeds were already knocking so there were a few carp about at least! I had micros for feed with 4mm and 6mm Bait Tech expanders for the hook, for the inside I was just going to feed some 6mm hard pellets and fish a banded 6mm on the hook. I plumbed up two lines at 10 metres and another at 5 metres plus a margin line at three sections to my left.

The whistle went and I cupped in half a pot of micros on my three skimmer lines before putting in some hard 6mm’s on the inside. I started on the longer line angled to my right with a 4mm expander on the hook and missed the first two bites before swapping to the line straight out in front and missed a bite here too! The wind was quite strong and bloody cold and I was soon putting my fleece on, I thought this was supposed to be a nice day! Kedgy had got off to a good start with a couple of carp fishing across to the far bank but it looked a long way over and hard work in the wind. Ray was getting some small fish on the worm but already it looked like it was going to be a bit of a struggle.

After missing about six bites I finally connected with one and netted a decent skimmer to get off the mark, my next bite resulted in a small roach and I think small fish may have been responsible for at least some of my missed bites. I was flicking a few pellets down the edge on a regular basis but still hoped I wouldn’t have to fish that line. To be honest it was really hard going and the only other fish I manged in the first hour was a small carp. Roger Russell on peg 16 had netted a couple of skimmers and Ray was still getting the odd silver but so far it was still looking like a low weight affair.

I managed a couple more decent skimmers plus a couple of blades and the inevitable carp from the right hand line but the other line was proving to be a bit of a flop and a brief try at 5 metres only resulted in a very small roach. I had a visit from the Tart who’d only caught one skimmer so I wouldn’t be opening the Savlon just yet, Janders also wandered up and he’d had a good skimmer plus a couple of carp. Kedgy was now fishing into the corner and getting the odd carp and I reckoned he’d be there or thereabouts at the end.

By the half way point I was on four decent skimmers, a few bits plus three carp and I didn’t think there was much between Roger, Ray and me as far as the silvers were concerned. By now bites were quite hard to come by and a brief try in the margin saw just one small dig on the float so I decided to stick it out at 5 metres and go out to the longer lines when the wind allowed. I had a good skimmer off the shorter line which and followed this up with a 3oz blade so I was at least getting the odd bite.

With a couple of hours to go I could see Brendon starting to pack up so I could hopefully pack the Savlon away for another week. I had a carp off the short line so went back to the longer line but it was hard work in the wind. The Tart appeared behind me for the last period of the match and I had another carp from the short line and next chuck had a 2lb skimmer which had seen better days. Ray started to catch some good skimmers from his chopped worm line and was pulling away from me. Glynn also turned up and he’d packed up as well (3-1 to me now) and I was £2 to the good at least!

I did manage one more carp from the 10 metre line but no more good skimmers came my way and for the second week on the trot I wasn’t too upset to hear the final whistle. I ended up with 12 silvers (six decent skimmers plus blades and small roach) and seven or eight carp. The bank side grapevine was suggesting Scotty had done well as had Adie Bishop and I knew Kedgy would be in the mix as well and I was pretty sure Ray would be up there in the silvers.

I packed up and didn’t think I’d be picking up today either, the scales were soon on their way and I caught up with them at Mark Hanham in peg 11, he had a total of 22lb 10oz and that actually put him in the lead both overall and in the silvers! Reece hadn’t weighed and Rob Cox had 7lb so I was now up £4 in side bets with Janders to weigh next, he had 3lb 14oz of silvers and 8lb 8oz of carp to give him a 12lb 6oz total. Ray had 8lb 8oz of carp and then his silvers went 11lb 3oz and there was a good chance he’d win it with that.

Then it was my turn and my carp went 18lb 8oz and when my silvers went a level 7lb I’d actually gone into the lead overall and was second in the silvers, I didn’t think it would be enough to frame but thought there might be an outside chance of sneaking in the silvers. Steve Kedge had 44lb 3oz next door and wouldn’t be far away with that. I didn’t see the rest of the weigh in as I was taking my kit back to the car, I bumped into Bruce who was admitting to 6lb of silvers so I knew there was a good chance he’d beat me but could I hang on to third place in the silvers? No was the answer as Bill ‘The Silvers King’ Hopping did 8lb from peg 32 and he said Bruce had weighed 3oz more than him – bugger.

Scotty had done well to weigh 35lb 14oz from peg 22 which put him in third place and Adie Bishop had the top weight on the day with 53lb 8oz from peg 26. Rob Kingston got his revenge on me (and his pound back) when he weighed 29lb 8oz from the same peg he had last week (35) which put him in fourth place overall. Then Pete called me out as last in the money and I picked up £23 which was a very welcome surprise so not too bad a day as I finished 5-1 up in side bets as well.

So a rather frustrating day and the silvers weights seemed to have dropped right off but I think the unsettled weather isn’t helping. Some other good news was that Chelsea beat Swansea 1-0 which was rather like my battle with Brendon which ended up Chard 1 – Torquay 0! Next week I’m at Perry St for the Good Friday match and then back there again on the Sunday for the start of the Spring League, so come back on Friday to see how I get on as the Tart is also fishing and hoping to finally open that tube of Savlon!