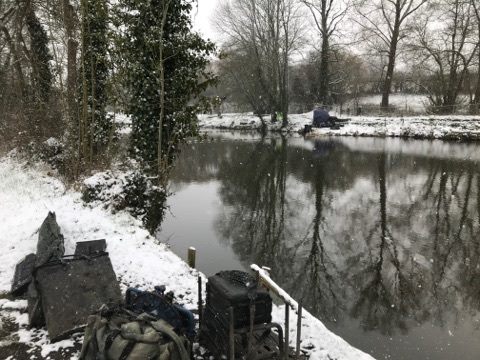 After the ‘Beast from the East’ where I missed fishing on a Sunday for the first time in ages, the forecasters were predicting a mini version for this weekend. I was hoping it wouldn’t be too bad and Saturday seemed to back this up with just a few snow flurries and a light dusting of the white stuff, certainly nothing to rush off to Tesco’s and panic buy all the bread and milk over! I spent some time preparing my bait and even tied up a load of hooks in readiness for the next day.

I headed off to bed around 10:00 and looking out the window, it was white! Snow was falling heavily and it was looking like a serious case of deja vu. Waking up early I looked outside and although there was a lot of snow about, it didn’t look like the roads were too bad. A quick text to Les and he confirmed it was on so I loaded the car before driving carefully to Millfield café for breakfast. There were quite a few there already including the Torquay contingent, although a few people had contacted Les to say they didn’t want to risk it.

As I was enjoying another cracking breakfast, some more of the Torquay lads (or his disciples as the Tart likes to call them!) turned up including Geoff who was wearing a rather fetching pair of pink crocs which I didn’t think was particularly suitable footwear given the weather but he insisted he only wears them in the van. 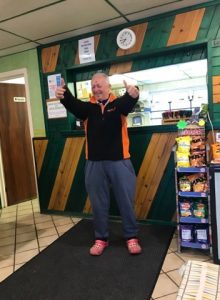 Geoff and his pink shoes

Les announced the draw sequence which put me on peg 16, not my favourite peg but it had produced some fish on Friday when Les and the Tart had been out practising. Talking of the Tart, he was in high spirits as he’d drawn peg 3 with three empty pegs to his left, so even when he’s not drawing end pegs, he somehow ends up on an end peg!

I got my gear to my peg but already the snow was starting to come down a lot harder and few people were starting to worry about whether they’d actually be able to get home and it was decided that the best and safest option was to call it off and reschedule for next week. As I hadn’t even started to set up, I just picked up my kit and took it back to the car. We loaded the cars and chucked a few snowballs at Howard and The Hoff before heading home. 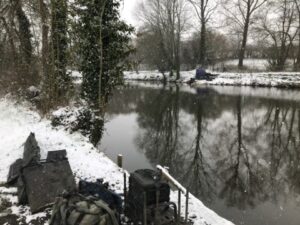 I’m fed up with this weather now, typically the temperatures are set to rise tomorrow when I’ll be at work!