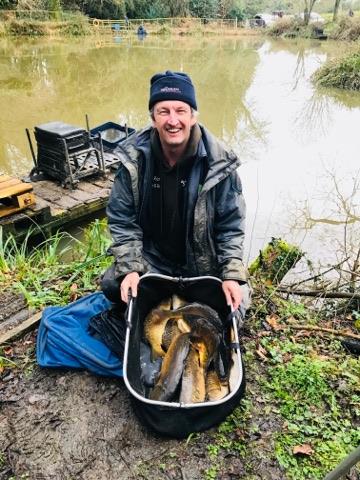 After not fishing last Sunday I was gagging to get out this week but wasn’t really sure where to go so when Les text to ask if I wanted to fish Sadborow, I didn’t need asking twice! I’d really enjoyed fishing it last summer when I had three cracking days fishing catching between 75lb and 120lb. I was expecting it to be a little harder than that after the weather we’d just had but I was still hopeful of getting a few bites although I wasn’t sure I’d catch shallow!

I met the others for breakfast at Wetherspoons and it’s always great to catch up with the Chard boys and the banter was soon in full flow, I have to say I always think the grub is pretty good and really good value too. After we’d all finished eating, the Hoff collected the money before announcing the draw, I really wanted to draw one of the open water pegs but pulled out peg 5 behind the island which can be really good. Oz had the choice of peg 4 or 6 so whichever one he chose, I’d have an empty peg on one side which is always a bonus.

We got out the pond and it was nice and coloured which would probably help us around the island as it’s quite shallow tight across. I set up two rigs, a Drennan 0.4 gram Carp 1 for down the middle of the peg at five metres and a 0.3 gram Drennan Margin Crystal for fishing by the island, down the edge at 10 metres to my left and up towards the inlet pipe to my right at 11.5 metres, both rigs had 0.14mm bottoms with size 16 B911’s. On the side tray I had Bait-Tech 2mm Carp and Coarse Pellets which I’d soaked the night before and added some Special G Dark to, some corn to which I added a glug of ‘The Juice’ and red maggots (dead and alive). I also mixed up some Special G Dark and added dead maggots and corn for the edge line to my left. 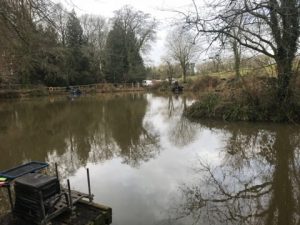 The view from peg 5

On the whistle I fed a few micros along with a pinch of dead reds and a few grains of corn by the island before putting a pot of micros and corn up by the inlet pipe and then four balls of groundbait on my inside line to the left, in fact I was still feeding when the Tart latched into a fish first chuck! Butch on peg 2, Wing Commander Smith on 3 and Oz all got off the mark quite quickly and I was hoping it would be my turn soon. I was toss potting in a few micros and dead reds along with a couple of grains of corn every chuck and had a couple of indications before dropping off a small roach. After about twenty minutes, a positive bite resulted in plenty of grey hydro coming out on the strike and I played it carefully, not wanting to lose the first carp. It turned out to be a nice ghostie of 5lb or so which was a great way to open my account.

I had a 2lb carp not long after but also managed to hook some overhanging vegetation on the island but luckily got every thing back. At this early stage, nobody was bagging and there were several of us on two fish. I decided to try up by the inlet and toss potted in a pinch of micros and a few grains of corn and started getting indications straight away, I missed a couple of bites before catching another carp to put me on three after an hour.

I had another three carp in the second hour and it was neck and neck with Oz although from what I could see, everybody else was struggling. I was feeding maggots by hand on the five metre line and also keeping the margin to my left topped up with the odd small ball of groundbait. It was still fish for fish with Oz and we both got to eight carp quite quickly in hour three, there were obviously quite a few fish up by the inlet pipe and I hooked number nine only for it to come off as I shipped back. I went straight back out, the float settled and then buried, this felt like a good fish and I played it carefully. I got down to the top kit and it wasn’t really doing much when all of a sudden everything went slack, my initial disappointment at losing the fish turned to dismay when I realised the float and everything had gone!

I didn’t get much sympathy from around the pond and as I searched in my box for another suitable rig there were allsorts of witty comments about having to use one of my 1.5 gram river rigs as I had nothing else. I eventually found a replacement but as so often is the way, it just wasn’t the same and over the next half an hour or so I only had one more bite which of course I missed. It looked like the fish had gone as Oz couldn’t get a bite now either.

Les shouted down to ask if the float I’d lost had a yellow tip because it had appeared up their end of the pond and then they were all trying to hook the rig and the fish attached to it. Apparently quite a few fish could be seen swimming about in front of peg 1 which prompted the Tart to have a go at some ‘Mad March Mugging’ and he started to catch a few and he even got Butch to be his spotter. Every fish he hooked was met with cries of ‘Despicable’ from around the pond, I even felt qualified to join in as, unusually for me, all my fish had been caught on the deck.

Then Les started catching as well and even caught the fish I’d lost earlier and said my hook was in it’s tail! With half the match gone and people starting to catch up the other end, it was time to try my other inside line to the left but before that, I’d just see if there was anything on the five metre maggot line. I was feeding live maggots with two dead reds on the hook and after five minutes a positive bite resulted in carp number nine. I started to catch really well and it was solid, I did have a little spell where tiny roach and perch became a problem so I upped the maggot feed and that did the trick.

It started to rain quite hard and sport slowed up a bit but I was still catching steadily and even had a lovely skimmer getting on for 3lb. Les was getting odd fish and the Tart had even got one of his special ‘ghost’ top kits out so he could mug properly. Squadron Leader Smith also started to get a few and landed a big ghostie, and Chilly had finally started to catch after being quiet for most of the match. Butch and the Hoff were struggling and just to compound his misery, he’d got some pole sections stuck together.

With around half an hour left, I was up to 23 carp and that skimmer and if the bankside grapevine was to be believed, I was way out in front although it was going to be awfully tight for second and third with several people all on similar numbers of fish. I did manage one more carp and had enjoyed a brilliant second half of the match, only losing one fish.

I packed up and the scales started with the Tart who had 37lb 14oz although he still wouldn’t admit to mugging and said he’d caught ‘deep shallow’ (despicable!). Butch didn’t weigh and then Field Marshall Smith had 29lb 12oz and got the cakes out, this week we had Tesco’s Flapjack Bites and very nice they were too, cheers Mike! 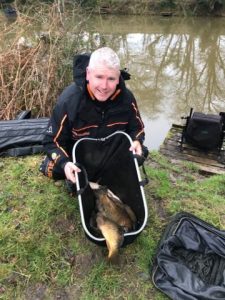 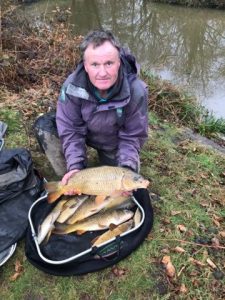 Commander Smith had 29lb 12oz which included this cracking ghostie

Oz was next and as expected it was very close, his weight was called at 36lb 10oz. Then it was my turn and my skimmer weighed 2lb 12oz, my first carp net went 35lb and then the second net weighed 41lb 8oz to give me a 79lb 4oz total, a lovely days fishing. With Hoff and Chilly not weighing in, that just left Les and again it was really close but his 36lb 2oz fell just short and only 1lb 12oz separated second and fourth place. 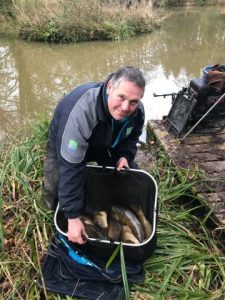 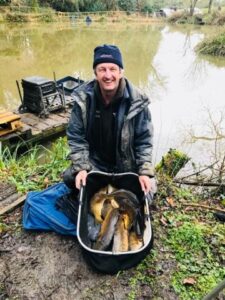 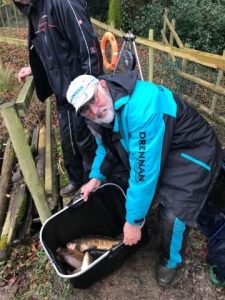 Back at the cars and Les called me out in first place and I had a lovely pick up of £90 plus my first pound of the year off the Tart which always fills me with unbridled joy!

I’m standing in for somebody at Perry St next week so come back then to see if the Tart gets his pound back!