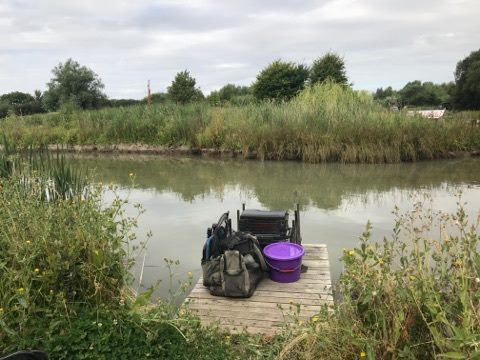 After a disappointing match last week, I was hoping for better things this Sunday, the match was on Longs but with no let up in the hot weather, it was even lower than last time and I was expecting a bit of a carp fest yet again. All the usual suspects were in attendance including both Jeff Sparks and Glynn Wickham who wanted to take advantage of my recent poor form and mug me again!

The golden peg was drawn by Glynn’s lad and he pulled out number 9, as I neared the front of the queue, several of the pegs I fancied had already gone, Nigel was on 19, Glynn on 37 and Bill on 35. I had the last ball in the bucket which turned out to be number 9, it wouldn’t have been my first choice but I had a nice day on peg 10 the other week, so hopefully they were still in the area.

I set up a 0.3 gram NG Mini Gimp to fish top two to the right and straight out and also at top two plus one straight out. For the ten metre lines I set up one of Smithy’s wire stemmed floats to fish to my right, straight out and towards peg 10 on my left. On my side tray I had Bait-Tech 2mm Carp and Coarse micros that I’d soaked the night before plus 4mm Xpands for the hook with a pot of Special G Gold soft pellets as a change bait and some Bait-Tech ‘The Juice’ groundbait I’d mixed the night before. I’d also found a ball of paste in the freezer and brought it on as Jeff said he’d been catching some good skimmers short on a pea sized lump, I thought I’d give it a try even if I felt a little bit like a fish out of water with it (pun intended).

It was overcast and there was a little bit of ripple so hopefully it might fish well although there were loads of carp with their backs out of the water and everywhere you looked there were bubbles with the odd plume of silt and we would be hooking a few for sure. With the majority of the anglers fishing for silvers today, I almost had a crisis of faith and thought about setting up a shallow carp rig but sense prevailed (or did it?). 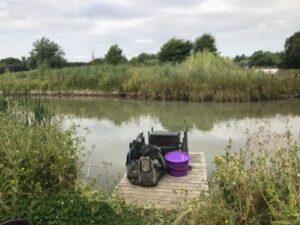 You can see how low the lake was by the exposed bank on the far side!

Jeff was on peg 11 so I would be able keep an eye on how my pound was doing and Ray Wickham was on 13. On the whistle I cupped in a ball of groundbait straight out at top two, micros to the right and then micros on the right and straight out at ten metres before potting in two balls of groundbait at the same distance to my left. I went to pick up the rig for the short line and it was tangled on some vegetation, I gave it a yank and the rig tangled round the pole tip, minus a hooklength! Little did I know at the time that was just an indication of what was to come!

After tying on another hooklength, I started on the right hand short line, I did miss a couple of indications but after ten fishless minutes I switched to the other top two line. I foulhooked a carp which wasn’t on long but the next bite resulted in a 2oz roach and I was up and running. A 6oz skimmer followed not long after and when I had another I thought I’d be in for a good day. I was already having problems with my expanders which were rapidly turning to mush which was a tad worrying at this early stage. I think next time, I might try preparing them in the morning rather than the night before.

I saw Jeff net a good skimmer and when I asked, he said he’d had three already but had also lost several carp. I then hooked a pond pig which went berserk and just kept going, it went past the point of the island on peg 7 and then there was an almighty ‘TWANG’ as the rig flew back through the water at a rate of knots and I was reaching for my hooklength box again! For the remainder of the first hour I swapped between my two short lines but every bite resulted in a carp although most of them were smashing me up!

I went out on the longer lines starting on the right, I missed a couple of bites but with my expanders in a right state, I tried a Special G hooker, after a short wait, the float shot under and another turbo charged carp took off. The middle line was next with the same result and then the line to the left produced yet another carp. It looked like Jeff was having problems too but in between he was getting the odd decent skimmer.

I came back in on the short lines and had a decent leaping skimmer from the right on a Special G pellet but the next fish was a crazy carp that went round the pallet in peg 8 and another hooklength bit the dust but worse still, the float body and the stem were no longer an item! I bodged it back together but I wasn’t enjoying myself very much, my pellets were mush, I was running out of hooklengths fast and one of my favourite floats was in bits! Just to cheer me up even more, I lost a decent foulhooked skimmer at the net!

With nothing to lose, it was time to try the paste, I lowered in a small ball and after a short while the float sailed away and I struck into thin air! I missed a few more bites before connecting with a carp, after playing it for ages, it went under my keepnet and transferred the hook to the net! This was getting almost laughable but at least I hadn’t lost my hooklength. Next chuck I hooked another as the carnage (or carpage) continued, starting to get fed up, I tried scooping it, only for the float to get caught in the landing net mesh which resulted in another hooklength breakage and the float sliding up the line and falling to bits again and this time, there was no way back for my little red tipped friend!

Jeff was still getting the odd skimmer and said Ray was catching well too, whereas for the first time in a long time, I was contemplating an early bath but with two hours left, I plumbed up again using the other rig and would swap between the short lines for the remainder of the match. In my poor deluded state (possibly heat stroke), I thought a decent run of big skimmers and I might still have a chance!

I was actually faffing about with my phone when I felt the elastic pull out, I looked up expecting a carp to be the culprit but was pleasantly surprised when a skimmer surfaced, maybe the comeback was still on! But then normal service resumed and vermin on steroids carried on emptying my hookbox, it was total Carp-ageddon! With about an hour remaining, Ray walked up shaking his head and said he was catching well but had also lost nineteen carp and had ten decent leaping skimmers come off!

Scotty Russell turned up for a chat and while he was with me, I had two skimmers in quick succession along with a couple of carp and missed several bites. He said his Dad was struggling on peg 1 although Glynn was catching on peg 37. He left me to it and I managed another decent skimmer and was playing a carp as the all out was signalled. My seven skimmers and a roach wasn’t going to win me anything but I was going to weigh in after sitting through six hours of torture!

I packed up and as Jeff was admitting to double figures I paid him a pound and checked I had enough change to pay Glynn as well. The scales started with Roger who had 7lb 3oz, I was next and my meagre catch went 3lb 6oz (I didn’t bother weighing my carp). Jeff had 11lb 4oz and then Ray weighed 12lb 12oz from peg 13. 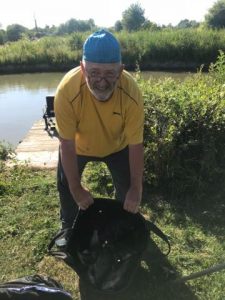 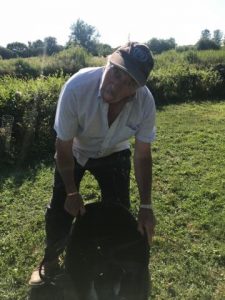 Ray had 12lb 12oz although judging by his facial expression, the sun had got to him as well!

Jim Jenner had 48lb on 17 followed by Nigel Wickham with 79lb 15oz from peg 19 and Mark Leahy had 63lb 11oz on 23. Then the scales reached the pegs along the track and Rob Birch had 11lb 14oz of silvers on 31 before we reached pegs 33 and 35 where there had been another titanic tussle of the paste kings, Roy Hughes on 33 has been in a rich vein of form and put a brilliant 155lb 9oz on the scales and then as Bill started weighing in all his nets, it was obviously going to be very close and after the totting up process was complete, he was just a small carp (or a large skimmer) short with 153lb 8oz. 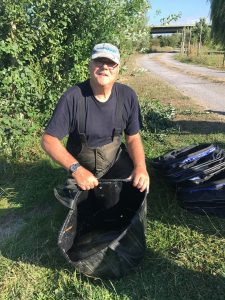 Bill weighed a brilliant 153lb 8oz for second place but is facing some stiff competition from Roy Hughes for the title of ‘The Paste King’!

Last but not least was Glynn and his estimates are getting worse as his 10lb actually turned into 14lb 9oz for another silvers win and I paid him my pound again (that’s 4-0 now and I’m setting up a direct debit!). 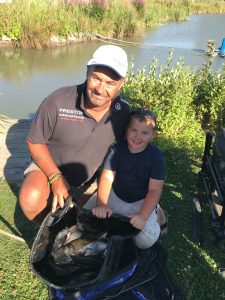 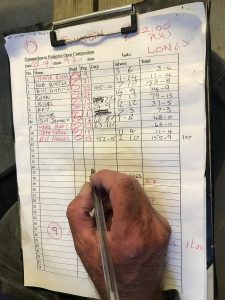 Today’s board with Roger’s hand writing out the results!

So all three of the Wickhams framed, God help us when Kenzie starts fishing the matches as well! Despite the pond being so low, it’s fished really well with only a fish separating the top two weights and four double figure silvers weights with only a good skimmer between first and fourth!

I was going to fish Dillington next Sunday but with the level of the pond right down, they’ve called it off so I’ll be back at Summerhayes which means on Saturday I’ll have to go to Tackleuk and then spend some time tying up hooks and rigs before Sunday!