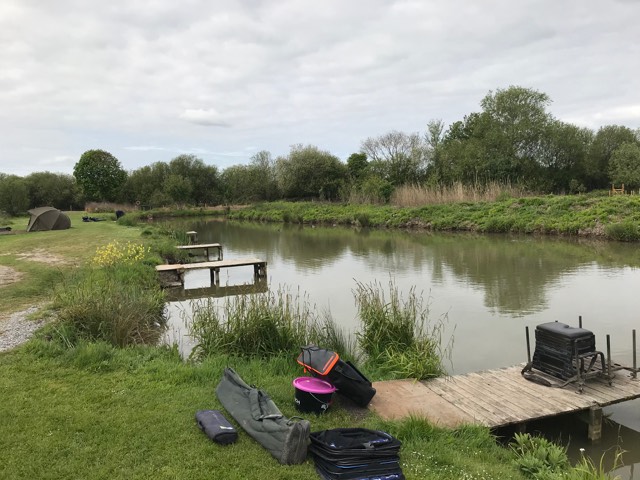 With it being a long weekend I booked into the match on Sellicks at Summerhayes, a quick pit stop at the Toby for breakfast and then onto Bridgwater. I arrived in plenty of time and the first person I saw was Big Frank who had turned up to pleasure fish on Longs, I had a quick chat before going to pay my pools and getting a coffee. I was a bit surprised when I saw there were only half a dozen of us booked in but then there were several festivals taking place and some people were on holiday etc. Pete always splits the pools evenly between carp and silvers on the Bank Holidays which I think is a great idea so with only a few of us fishing he would pay £48 to the winner of each.

The draw was announced and Pete asked me to draw a golden peg, I said ‘Watch this, peg 17’ and plunged my hand into the bucket and lo and behold, out came peg 17! It was then time to draw for our own pegs and I was hoping lightening would strike twice and pulled out…………peg 4! Rob Birch was the angler on peg 17 and my nearest neighbour was Chris Mawson on peg 10 so loads of room! 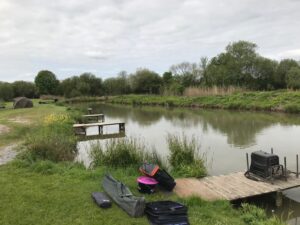 Perhaps I should change my aftershave!

I took my kit to the peg and there were loads of carp taking stuff off the top which wasn’t what I wanted to see! I set up two rigs, the usual 0.3 gram NG Mini Gimp to fish top two on the right and a 0.4 gram Malman Pencil for three lines, straight out at ten metres and then down the track at ten metres to the left and lastly a top two plus two line. As always my side tray was nice and simple, Bait-Tech 2mm Carp and Coarse micros that I’d soaked the night before, some dead reds and 4mm Xpands for the hook and I’d also mixed up some Bait-Tech ‘The Juice’ and Special G Green groundbait.

Mark Leahy and Rob came round for a chat before the start and asked if I was lonely! Pete got us underway and I fed a few micros on the top two line, half a pot on the top two plus two line and the same at 10 metres to my left before cupping in two balls of groundbait at the same distance straight out. I started on the top two line with a 4mm expander and after a few minutes, the float slid away and for once I didn’t miss it and better still, it didn’t feel like a carp and I netted a decent skimmer to get off to a great start.

My next fish was a small carp, I was having to wait quite a while for bites but did add another skimmer and then just before the end of the first hour, I had a second carp. I moved out to the longer line and as always, I dripped in a few micros on the top two plus two line and would feed it for at least three hours before trying it. I lost a carp on the longer line so next stop was the left hand line and had two decent skimmers in quick succession. I’d seen Chris net a couple of fish but it certainly wasn’t fast and furious, in recent matches between 17-20lb has been needed to win the silvers and things would have to improve drastically if I was going to get anywhere near that!

I had a couple of decent skimmers from the groundbait line but both the longer lines kept fizzing like crazy so in a bid to try and avoid the carp I would feed a few micros via the toss pot on one line and then fish the other. It worked to a certain extent but hooking carp is always inevitable and my hooklength box was starting to take a battering! A few times I’ve hooked fish which I was convinced were skimmers only for them to wake up and turn into carp when I’ve got down to the top kit.

As we approached the halfway point, Chris walked by to use the on-site loo and said he had 8 or 9 skimmers but had been trying to catch carp, I had around the same number so there wasn’t much between us but I felt sure Rob would be catching on the other bank. With 2.5 hours to go I went in on the top two plus two line for the first time and had a decent skimmer quite quickly, I then had to wait a while but added another good skimmer and a blade so although I wasn’t bagging, my catch rate was ticking over steadily.

A few carp muscled in and then I hooked a fish which didn’t feel like a carp although I’d already thought the same umpteen times but this time a gorgeous 12oz crucian popped up and went in the net. Things slowed up then so I had another quick go on the longer lines but only hooked more carp, I tried double dead reds but had a little pastie and that was enough of that.

Back on the shorter line with an hour to go and I foulhooked a decent skimmer that jumped out the water and then came off, next chuck I had one hooked properly but any thoughts of a grandstand finish soon disappeared and I went back to struggling. I did hook a fish that felt like a skimmer but then as I started shipping back the hook pulled. Frank turned up to see how I was doing and while he was there I had a decent skimmer and then with about five minutes to go, I lifted the rig up and there was a fish on and it soon became obvious I’d foulhooked a carp. I landed it and still had time to ship back out but as soon as the rig settled, Pete blew to end the match. I’d ended up with 15 silvers (1 crucian, 11 decent skimmers and 3 blades) plus some carp.

While I was packing up, Rob came round and said he’d had a nightmare hooking loads of carp and had only caught a few skimmers so I started to think I had a chance of winning it as I knew Roy and Bill had fished for carp and Mark had packed up, Chris had caught silvers but I thought I just had the edge on him. Pete soon arrived with the scales and my carp went 34lb 4oz and then the silvers weighed 11lb 6oz which was more than I thought. 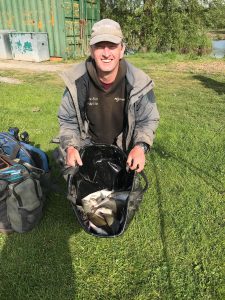 I had 11lb 6oz of silvers but needed a couple more

After taking my kit back to the car I caught up with the scales again just as they were weighing in Bill on peg 12, after all his nets had been emptied, his total was a brilliant 168lb 5oz. I had a look at the board and saw Chris had weighed 14lb 7oz of silvers so that was that. He’d caught some skimmers while fishing for carp and then saw Bill was bagging so switched to fishing for silvers and caught some chunky tench on his inside line in the last hour, well done mate. Mark and Rob didn’t weigh and then Roy on 21 had 92lb 1oz of carp. 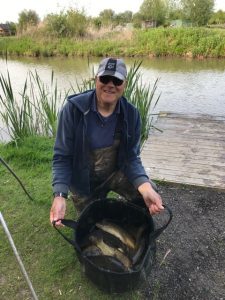 Another win for the Paste King, this time with 168lb 5oz 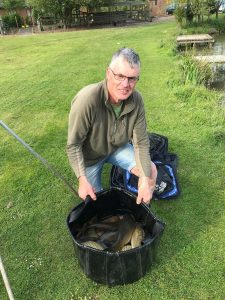 So for the second match on the trot, I didn’t feel like I’d done my peg justice, I’d lost a few skimmers, missed some good bites and I’m never quite sure what or how to feed to avoid the carp (any suggestions welcome but please don’t say fish for carp!!).

I’m fishing Goodiford on Saturday with the Torquay crew and although I have fished the Match Lake back in 2010, it was a silvers match, the talk this time is of fishing shallow for some big weights of carp so wish me luck!