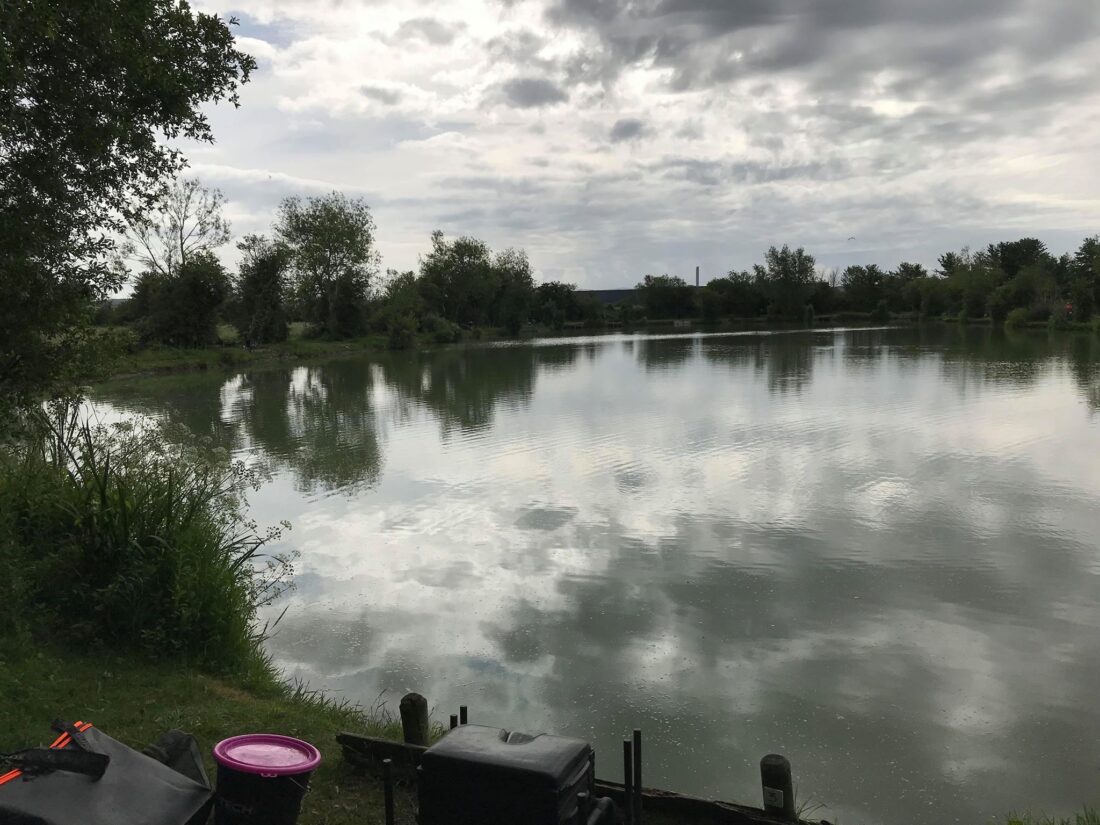 The next Stoke AA match was at Trinity Waters, a venue I’ve only ever fished once before, way back in 2014, re-reading that blog post, I’d really enjoyed it and said I’d be back soon but it’s actually taken me five years! With it being quite a while since I last visited, I tried to get some up to date info and I have to say a massive thanks to Baz Morgan, Lee Williams and Jeff Sparkes for helping me out.

I met Steve P at the Toby for breakfast and it wasn’t bad, could have been hotter and no fried eggs but nice all the same. We headed to Bridgwater and I led the way because I knew where I was going, well I say that but it has been five years, after a quick unscheduled trip to the recycling centre and then a u-turn after missing the turning, I got us there with minutes to spare!

I said hello to owner Tom and had a nice cup of coffee before dipping my nets and paying my pools, Dave Simms announced the draw and we all delved into the bag of dreams, I was hoping for a peg on the near side, preferably in the middle but pulled out peg 3 which put me on the end on the bottom bank. I asked Tom what it was like and he said it’s not a great peg although it does sometimes produce a result. Steve was on peg 1 in the corner so at least I’d be able to keep an eye on how my pound side bet was doing. 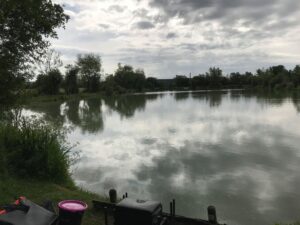 I had a nice view up the lake but would rather have been looking across it!

I’d made up a couple of rigs the day before, Drennan AS5’s in 0.5g and 0.6g at different depths, tied some hooks and changed one of my elastics. I set up the 0.5g for the six metre line and after plumbing up settled on two lines, one straight out and the other angled to my right, I also set up a 0.3g Drennan Crystal Dibber for fishing shallow at 13 metres as there were quite a few carp moving about and lastly a 0.3g Drennan Crystal Margin for down both the edges at four sections. On the side tray I had dead reds, micros, Bait-Tech 6mm Carp and Coarse pellets, Scopex corn plus Special G Green and The Juice groundbait I’d mixed the night before.

On the whistle I cupped in a ball a groundbait straight out and then two to the right before feeding both margins with corn and micros. I started straight out with three dead reds on the hook and toss potted in a few micros while also pinging out a few 6mm’s on the long line. After a couple of minutes, a decent bite saw a modest amount of elastic come out before I swung in a 2oz skimmer, next chuck I had slightly better one of 4oz so I switched to a 4mm expander and had another of a similar size and thought I was going to be for a nice day. Next put in the float sailed away but this time the strike was met with solid resistance before a big carp moved off, it kept going and snapped me!

I put another hooklength on but then started having problems with the float, from sitting in the water perfectly it was now too low, I took off a number 10 but it was then sticking out too much, adding a number 11 nearly sunk it and I spent ages faffing about, why do floats do that? does my head in! I had a couple more hand sized skimmers and then had a leaper around a pound, I tried the other line and had a couple more small fish but the float kept going sideways as the odd carp swam into the line. Steve was getting the odd skimmer but as yet I hadn’t seen many carp caught.

The next bite from the right hand swim resulted in a big fish plodding about and I knew it wasn’t a carp but it still gave me the runaround before I eventually netted a big skimmer around the 4lb mark, hooked under the chin! Next put in the same thing happened and I was convinced it was another decent foulhooked skimmer, I took my time with it but it then woke up and a decent carp gave me a torrid time, after quarter of an hour, I managed to net a near 7lb carp hooked in the wing! Not bad on 0.10mm bottom and size 16 F1 Pellet hook!

Swapping between my two groundbait lines, I was getting the odd better skimmer but was foulhooking quite a few and I couldn’t get them to settle, with two hours gone I had around 6-7lb of silvers (plus that carp) but with loads of carp showing themselves out on the longer line, I couldn’t resist having a go so cupped in some more groundbait on the shorter lines and left it to settle while I had a go shallow and hopefully would put a few carp in the net. After half an hour of pinging pellets and lifting and dropping the rig and flicking it at the odd carp that showed itself, I’d added the grand total of nothing to my nets! zilch, nada, not a bite!

Back on the skimmer lines and I was still getting the odd fish but I felt I’d lost my way and was going nowhere fast, losing what felt like a tench and another foulhooked skimmer didn’t help much either. Mike Goad on my left had landed a couple of decent carp, Steve P was still catching skimmers and John Loader next to him was getting some small fish on the short pole. The bankside jungle drums suggested that James White was bagging on skimmers and with only one silvers prize, I thought I was wasting my time and with not many carp being caught, I felt fishing for them might be my best bet.

Another go shallow saw me hook a carp briefly but I think it was foulhooked and then I finally had a fish but a 3oz roach wasn’t what I had in mind! Dave Simms up on peg 12 landed a big carp which broke his landing net pole and Rob Vaughn was getting the odd nice skimmer on the feeder. With two hours left I decided to concentrate on the margins which I’d been feeding from the start. I was getting bites on corn and had a decent roach and a couple of 4oz skimmers and was just thinking if they were there then the carp wouldn’t be but then the float buried and I hooked a much better fish.

After a decent scrap I landed a nice common that looked to be 8lb plus and then not long after had a smaller 3lb carp and it felt like there were a lot of fish there. Some ominous black clouds had started gathering and after some rather loud rumbling thunder, it lashed it down, all around the pond brollies started going up and I always worry about holding a long piece of carbon in these situations but thankfully we didn’t have any lightning. I had some more skimmers and then hooked another decent fish that I thought was a small carp and then a big perch popped up, on corn! It looked like a big fish and I’d have sworn it was getting on for 3lb but perch never seem to weigh as big as they look (if that makes sense!).

I was getting regular bites toss potting in micros and corn and with three quarters of an hour still on the clock and around 30lb in the net (three carp for 20lb plus 10lb of silvers), I really thought another three of four carp would put me on around 50lb and I didn’t think I’d be far away with that. The remaining time flew by and I only added a few more skimmers and roach to finish with a whimper!

Dave Simms soon arrived with the scales as I was first to weigh, the club have a trophy for the heaviest carp caught in the season so we weighed my biggest one which went 7lb 7oz and wasn’t as heavy as it looked, my three carp totalled 16lb 10oz so I was way out with my estimate. My silvers actually weighed a bit more than I thought when the display settled on 13lb 12oz, we weighed the perch separately and I still had high hopes of beating my pb of 2lb 6oz but the digital readout showed 2lb 5oz and it was looking like a day of ifs, buts and must try harder! 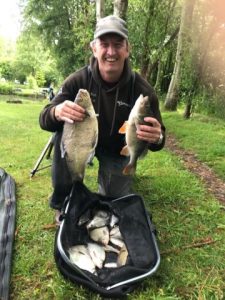 I had 13lb 12oz of silvers which included a vegetarian perch of 2lb 5oz!

Mike Goad was next and his biggest carp rather eclipsed mine at a weight of 15lb 10oz, a cracking fish and along with some other carp and silvers, his total was 36lb 7oz. Rob V had some nice skimmers for 7lb 13oz and then Chris W had struggled for 5lb 10oz. Dave Simms was next and he had a nice net of silvers for 14lb 9oz which included a lovely tench of 3lb 1oz that saw him overtake his dad in the race for the tench trophy and when he added 31lb 8oz of carp to give him a total of 46lb 1oz I was hoping he’d frame to give me a chance of the silvers by default. Dave P on peg 14 had 25lb 1oz and then Derek Goad had some lumps to weigh 40lb 14oz which put him in second place on our side. 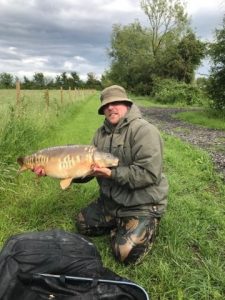 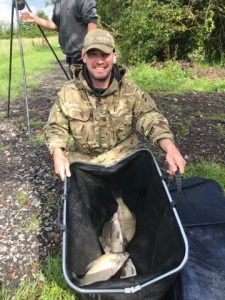 Rob had some nice skimmers for 7lb 13oz 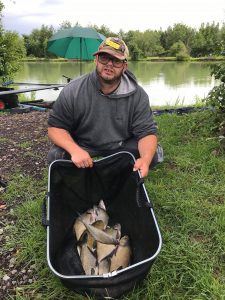 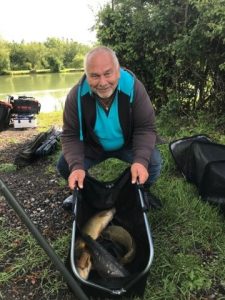 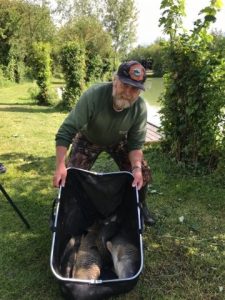 Back at the car park and Kevin Francis had the top weight on the other bank from peg 20 with 60lb 12oz, he’d also caught a big eel of 3lb plus on meat, Lee Smith weighed 33lb 11oz which included 11lb 10oz of skimmers, James White had 23lb 4oz of which 10lb 10oz was silvers (so there had been some kidology going on!). John Simms weighed 16lb 11oz and I didn’t manage to get a photo of his very colourful trilby hat! David Hilton had 14lb 5oz from peg 29, Steve P weighed 11lb 1oz which included 9lb 10oz of silvers so he paid me a nugget and John Loader had 6lb 7oz of silvers. Thanks to John Simms for the photos* 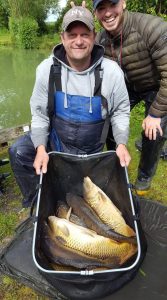 Kevin had the top weight with 60lb 12oz* 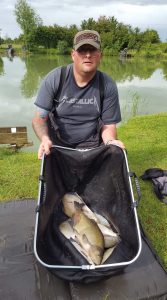 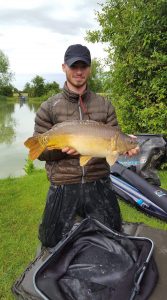 James W had 23lb 4oz which included this nice carp* 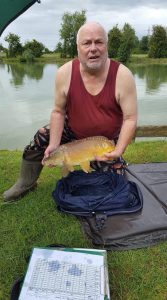 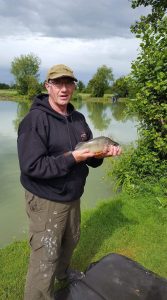 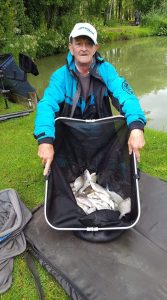 We gathered round for the results, Kevin was called out in first place with Dave S in second and Derek third, I picked up £20 for winning the silvers by default. The club also always does a raffle with the proceeds added to their charity pot which is brilliant, peg 12 was pulled out so Dave won a box of chocolates and had a nice day all round.

So another really enjoyable day although I haven’t fished a good match and should have just concentrated on the silvers like I’d originally planned as I think 20lb was more than doable! It’s a lovely water, all the fish were in really good condition and I can’t believe it’s taken me five years to return! I reckon it would be an brilliant venue for some silvers matches.