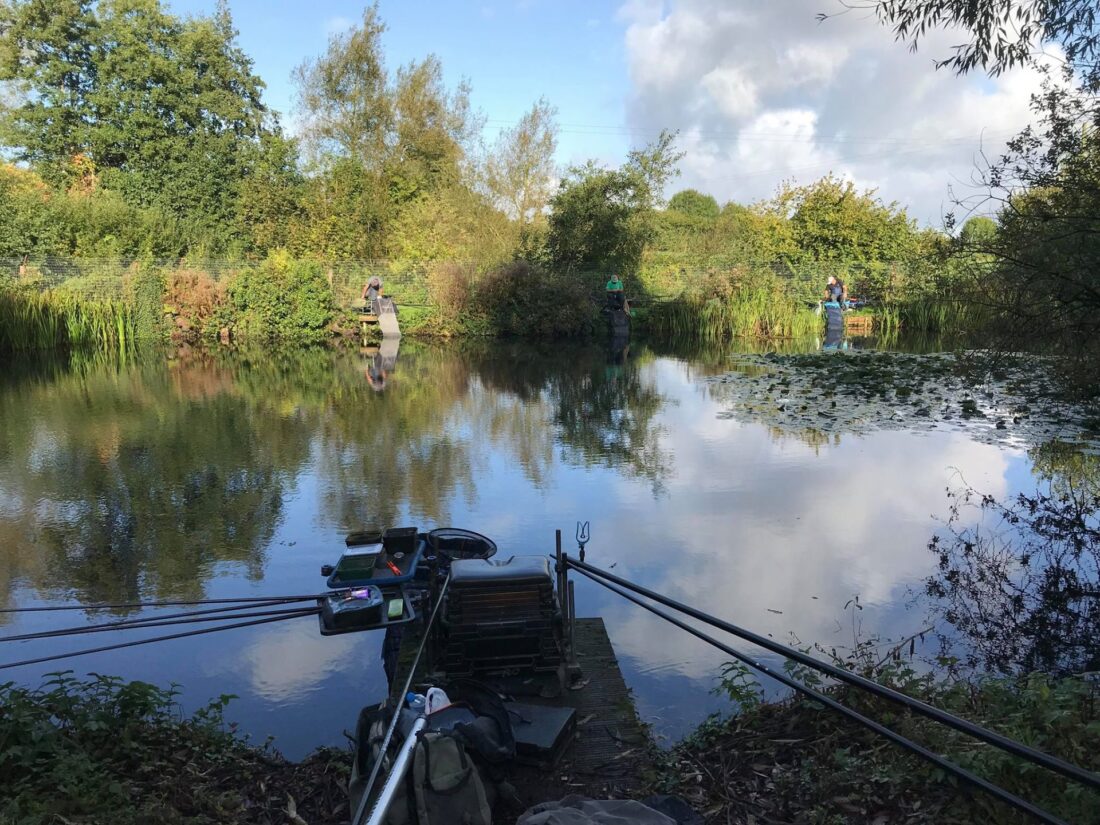 For the first Ilminster Warehouse match we had the opportunity to fish a private syndicate lake that I’ve heard a lot about over the years but never even seen, let alone fished, so I was really looking forward to it. I popped out on Saturday with Gordon and Karl to see what it was like and it looked lovely, albeit a bit weedy at one end, so we spent two and half hours raking the swims and got caked in mud! There were quite a few fish topping and I couldn’t wait for the following day although Gordon said they’d never had as many as eleven on it before so there was a chance it could be rock hard!

Sunday morning arrived and I was up bright and early before heading to the bowling club for breakfast. After everybody had arrived we set off in convoy to the pond and had a walk round to decide which swims to use. I really liked the look of peg 11 which had won the last match back in May with over 12lb, I announced the draw and after a few people had pulled their pegs, I asked Terry ‘The Toast’ if he’d draw mine and blow me if he didn’t hand me peg 11!

Most of the swims had lilies and with the water very clear, I was sure the fish would be under the cover, my peg looked lovely although it was a tad chilly as I was in the shade whereas Terry, Fieldy and Rob on the opposite bank were bathed in sunshine. I set up two NG Mini Gimps (0.2 and 0.3 grams) and plumbed up, it was around three foot deep at five metres and didn’t vary much across to the edge of the lilies at ten metres. On the side tray I had worm, caster and maggot with a tin of corn on standby in my carryall. 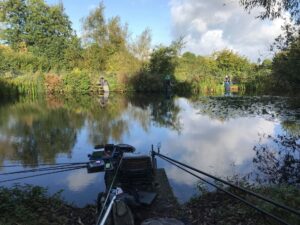 I was looking forward to this

We got underway and as I started to ship the pole out to feed some chopped worm and caster, Fieldy swung in a perch on the whip. I fed two lines, just off the edge of the lilies and then angled to my left in open water, I started with single red maggot on the hook and with Graham getting a fish a chuck, I thought I’d catch straight away. I lowered the rig in and fed a dollop of choppie mix via the toss pot and I was like a coiled viper ready to strike! The float just sat there and I couldn’t believe it, Fieldy was still catching quite well so I started inching the float closer to the lilies, finally a little dip of the float resulted in a small perch to get me off the mark.

Then I saw Paul Adams up on peg 4 use his landing net and I heard him say it was a nice tench which was hopefully a good sign so early in the match. Terry ‘The Toast’ on peg 1 and Rob on 3 both had a couple of perch but I hadn’t had any more indications so switched to the other line angled to the left with a worm head on the hook. The float settled and then went straight under but the strike resulted in a clump of Canadian pondweed, next put in I had a 2oz perch on when I went to move the rig, another followed and at least I was starting to get a few fish (even if I wasn’t seeing the bites!).

I had a small perch come off shipping back and then hooked a slightly better one that went into some weed and came off, switching back to the lilies, I had a perch straight away but it was a one off. As the first hour came to a close, Fieldy had slowed up and Terry, Rob and me hadn’t even got going yet! Apparently Gordon on peg 9 had landed a decent tench so him and Paul were the early leaders.

By swapping between my two lines I had a couple more small perch but also had another come off and it wasn’t really happening. Trying a few different areas it soon became apparent there was more weed present than I’d first thought (we hadn’t raked the pegs at top end as they’d looked pretty clear of weed yesterday). I had a couple of small perch where I hadn’t fed anything and I think with the water being crystal clear I was just chasing pockets of perch around.

As we passed the halfway point, nobody at our end was catching and I thought the whole pond was fishing hard, Andy Saunders on peg 5 text me to ask what I had so I presumed he was struggling as well so was a little surprised when he said he had around 5lb of quality roach and perch! He then said Big Frank on peg 8 had two tench! I didn’t know what to do next, despite scaling down I just wasn’t getting any bites by the lilies, out of desperation I pushed the pole under the tree to my right so the float was tight to lilies, if I hooked a tench, there was no chance of getting it out with a 0.08mm bottom!

After about ten minutes the float slid under but the strike didn’t result in much elastic coming out and a half ounce perch didn’t boost my weight by much! Terry was now on the method feeder by some reeds and he was emptying his jumbo flask of it’s coffee contents. Leighton on peg 10 said he’d lost a decent fish and I felt if I was going to do any good today, I needed a couple of bonus fish so set up a heavier rig with 0.14mm bottom, a size 16 B911 and a beefier elastic. A big pot of chopped worm and caster was deposited by the lilies and I went over it with half a dendra. Now I’d love to report, that I caught several big tench and went on the win the match but I never had another bite! My final tally was eleven little perch that I wasn’t sure would even go a pound.

I grabbed the scales and started the weigh in with Terry, he had a couple of nice roach and a few perch for 1lb 4oz, Fieldy had 2lb 3oz with nearly all of that coming in the first hour and Rob had 1lb 6oz so it had been really difficult at our end. Paul on peg 4 had that nice tench and some decent roach and rudd for 5lb 12oz and I thought he wouldn’t be far away with that but then Andy pulled his net out and had some clonking roach, rudd and perch for 9lb 1oz! Next was Dave ‘The Cannonball’ Phillips on his shiny new seatbox and he weighed 3lb 6oz which included a stunning little crucian of 6oz or so. 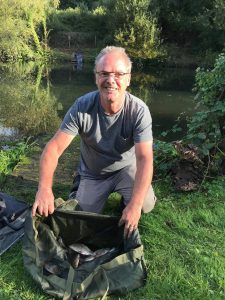 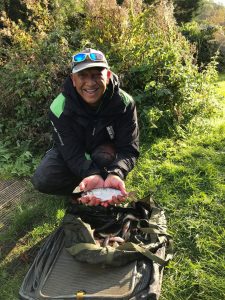 Fieldy had 2lb 3oz which included a nice roach 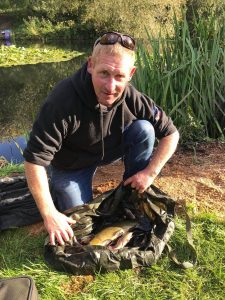 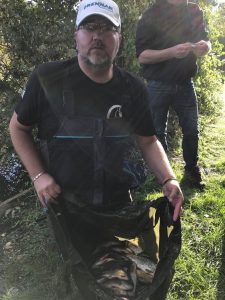 Andy had 9lb 1oz of quality roach, rudd and perch 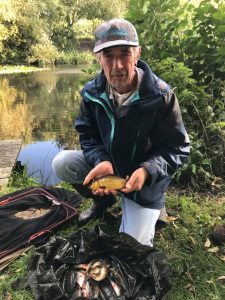 Dave had a stunning little crucian in mint condition

Then we got to Jake on peg 7 and he had a lovely net of quality roach, rudd, perch plus a tench for 14lb 6oz and Frank on the last peg on that bank had 9lb 10oz which included four tench and he lost four as well. We headed round to our side and Gordon had a cracking tench in his 3lb 5oz but then Leighton didn’t weigh in and my haul went 1lb 3oz (mainly small fish!). 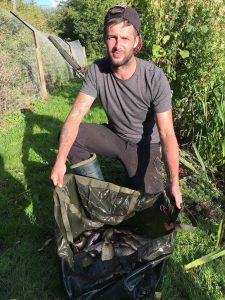 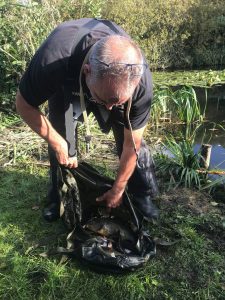 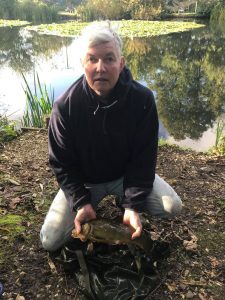 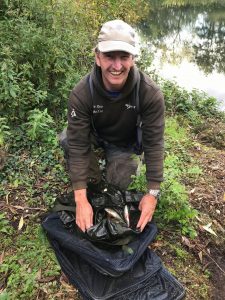 I had eleven perch for 1lb 3oz (mainly small fish!)

So the top half of the pond had been dire but the bottom end had fished really well when I had expected the opposite to be the case, as the first few pegs are the ones that get fished the most. Could it have been because we raked those swims yesterday or maybe the fish were walked down the pond when we all arrived. I don’t know the answers but there were only three or four roach and rudd caught in the top half of the pond and we had 6lb between five of us whereas the other end had quality roach and rudd plus tench and the six anglers weighed 45lb 8oz!

I always get a real buzz fishing somewhere for the first time and I was gutted not to have had a better day, you’d have thought after all the hard work the day before, the fish fairy would have smiled down on me! I’d like to say a huge thanks to Gordon and Karl for showing me round and helping with the raking and to Danny Blunn for allowing us to fish.

Next week is the start of the V.E.S. Precision league and I’m looking forward to getting back on the river, if you want to fish, let me know. I would also like to say a massive thanks to Rob Cox, Terry Morgan, Steve Hurford and anybody else who has been down the river cutting out swims ready for the league to start.