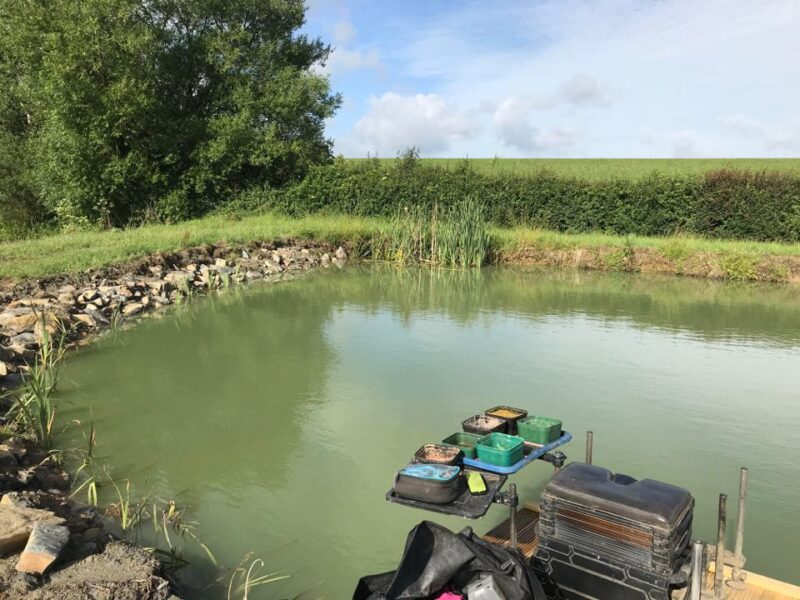 I’d really enjoyed my first match here a couple of weeks back and was looking forward to another go, the other good news was that Cafe Morgan was open again! The Breakfast Club assembled bright and early and once again Terry ‘The Toast’ had outdone himself, this week the Full English also had black pudding, I’ve never had it before as I didn’t think I’d like it but I have to say it was very nice. The chef wouldn’t accept payment so we all stuck a fiver in for the Stoke charity fund, absolutely fantastic grub mate. Also the lockdown hair continues getting longer and Steve P was modelling the full on Chuckle Brother loo brush this week! 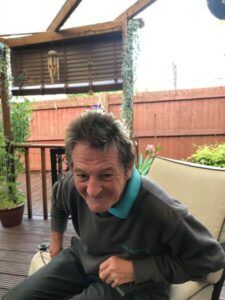 Then we headed off in convoy to Covey where we were met by Chris and James White, as it was a rolling draw, most people had already arrived and there were only a few pegs left, match organiser Steve Chant said peg 1 was still in the bucket. The Toast was in front of me and James drew peg 8 for him, then it was my turn and he only went and pulled it out for me, cheers mate! The two remaining members of the Breakfast Club had peg 3 (Dave) and peg 15 (Steve) drawn for them. 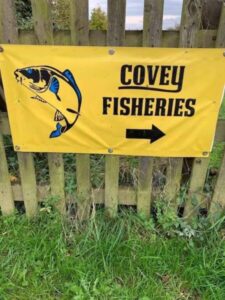 I did have a little plan that if I didn’t draw one of the end pegs (1 or 17) or around the the tree (12 or 13), I was going to fish for silvers but that obviously went out the window. My peg was actually a new one as peg 2 was the old peg 1 and it looked gorgeous with the end bank to go at and quite a few fish moving about although my only slight concern was that the wind was blowing up towards the other end and as Bobby G would say, there was no ripple! 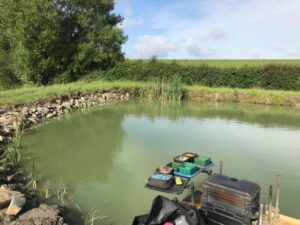 After the last match here, Bob very kindly let me have a little handmade float he uses for fishing hard pellets across, it only takes a couple of number 10’s, so I set that one up and a similar Carpa pattern, both had size 16 Guru LWG’s with a hair rigged bait band. I plumbed up across (14.5 metres plus the dolly butt) and towards the end bank at 10 metres, because of the rocks, it was all over the place but I found an area around the same depth as across. I also set up a 0.4 gram Drennan Carp 1 to fish top two plus two and at 10 metres where I would feed micros, corn and dead reds. On the side tray I had corn, micros, 6mm Bait-Tech Carp and Coarse Pellets plus live and dead red maggots.

Bob wandered down before the start and said he fancied Mark Leahy in peg 17 and Dan White on 11 to do well but as he had an empty peg on his right, I was sure he’d be there or thereabouts. Chanter got us underway at 10:15 and I fed micros, corn and dead reds on the two lines, some 6mm’s at 10 metres towards the end bank and threw a few at top two plus one down the edge to my left. I started across, toss potting in a few 6mm’s, Tom Green on peg 2 was into a fish nearly straight away and then I had a nice little F1 around the 12oz mark.

There were obviously a few fish there and I was getting regular bites, mostly from F1’s along with a couple of carp and after an hour I had ten fish. Looking up the pond, everybody seemed to be catching a few and Bob was in bagging mode. The second hour was even better with around the same number of fish but instead of 8-12oz F1’s, I was now getting 2-3lb carp. Tom and Dave Hilton were swapping between the tip and the pole and getting odd fish.

Going into hour three I was still getting some nice carp with odd fish pushing 4lb but I also practised catch and release on a few, some were foulhooked but a couple of better fish just came off which led to some rather choice Anglo-Saxon phrases on my part! Also with a 50lb net limit, I thought around 15 carp in a net would be 45lb-ish so started my second carp net. The two lines I’d fed with micros were fizzing like crazy and I was itching to try the end bank but I was loathed to come off my main line, especially as I was still getting regular bites.

The fourth hour was similar and I reached 40 fish but bites were now becoming more sporadic, so I decided on a quick look over the micros with the deeper rig as Tom was now getting some nice fish, I gave it ten minutes but despite loads of bubbles I only had a couple of knocks and gave that up as a bad job, I didn’t even try the top two plus two line. Next I went to the 10 metre end bank line and started getting odd fish, some nice carp and F1’s, it wasn’t fast and furious though and annoyingly, I pulled out of a couple as well.

I was still firing some 6mm’s across and after dropping in on the short edge line where I’d fed by hand since the start, I was quite surprised I never had a bite so went back to the far bank and had another nice little run of fish. With around half an hour to go, I had sixteen carp in both my carp nets and around 20 F1’s in the other net and was starting to worry in case I went over the limits so I chucked in another net and of course then suffered the dreaded fourth net curse! I lost a decent fish after having it on for ages and then only managed one more across so spent the last ten minutes fishing the end bank but never had another fish. My clicker was reading 54 fish which was around 20 F1’s and the rest carp.

I packed up and loaded the car before walking up to watch the weigh in from a safe distance, Mark Leahy had 47lb 1oz from peg 17, Chris ‘Two Barbel’ White weighed 30lb 10oz from 16, Parker ‘The Pole’ had fished for silvers and had 9lb 4oz which included a near 3lb bream, Chanter had 36lb 3oz which included a nice barbel and then Chilly weighed 62lb 3oz on peg 13 to go into the lead. Lee J had 38lb 6oz including three barbel on meat and Dan White weighed 38lb 15oz from peg 11. 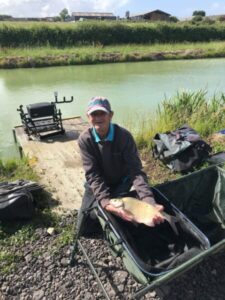 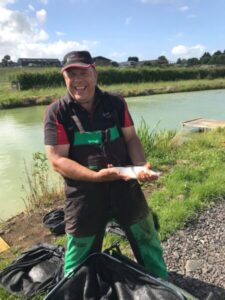 Blaker on 10 didn’t weigh and then ‘The Toast’ had 34lb 4oz, also joining the exclusive Covey Barbel club. Bobby G had 73lb 2oz from peg 7 and I thought it might be tight between me and him. Nick B chucked back on 6 and then Tom Cassidy on 5 had 27lb 5oz, James White didn’t weigh, Dave Hilton had 25lb 10oz and Tom Green had some nice carp for 36lb 6oz. I was last to weigh and my second carp net went over 35lb, then my single carp plus F1’s went 26lb odd before my first carp net added another 35lb to give me a total of 97lb 11oz, what a lovely day! 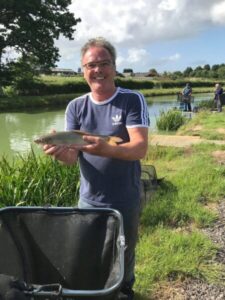 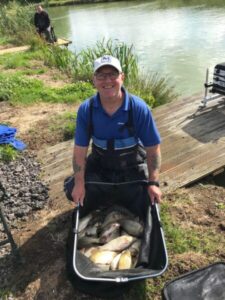 Bob did well again, this time with 73lb 2oz from peg 7 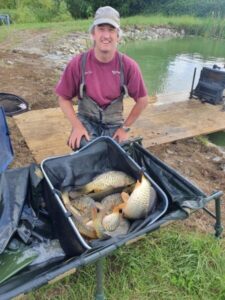 I picked up a very nice £110 plus nuggets from Terry and Steve but was a little gutted that I hadn’t beaten the match record which I believe stands at 102lb, I certainly had my chances today and with hindsight I shouldn’t have tried the micros line or down the edge but that’s all ifs, buts and maybes! It did make me realise I’ve got a lot to learn about hard pellet fishing and if someone more switched on to it had drawn my peg today, I’m sure 120lb plus would be the new record! 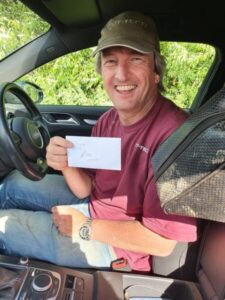 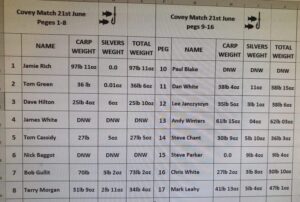 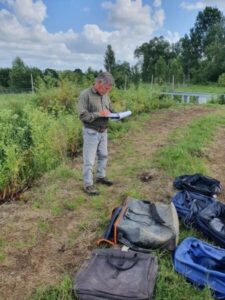 Another really enjoyable day at Covey, brilliantly organised and run by Steve Chant, Chris and James White, it’s a cracking little fishery with plenty of parking and no long walks, it’s well looked after and the fish are all in fantastic condition. The weights aren’t ridiculous and the fish are the perfect size for matches, there’s a good mix of species and plenty of bites to be had. Obviously the end pegs are normally an advantage in matches but good weights are possible from anywhere. Thanks to Steve Chant for the photos*