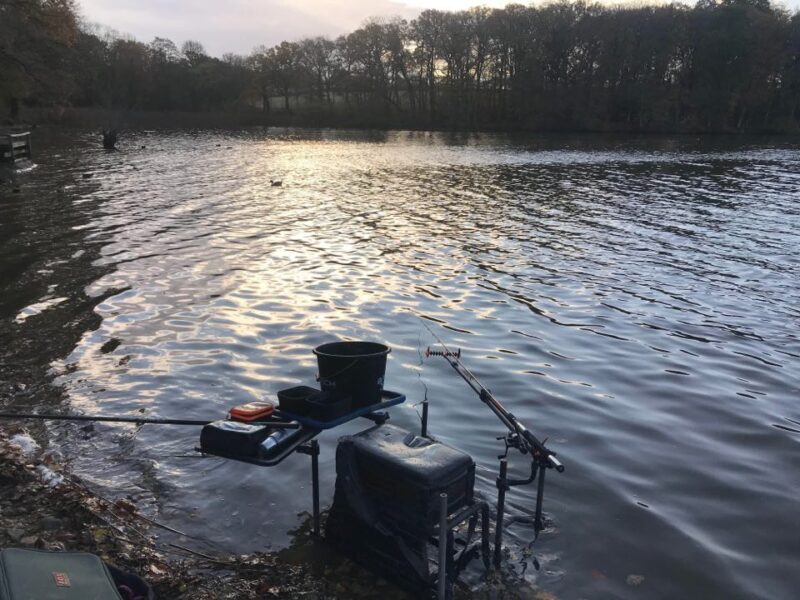 Due to the second lockdown and matches off the agenda once again (hopefully only for a month), I wasn’t going to bother going out but with my poor old dad in various hospitals for over six weeks and me being on my own plus working from home, I was starting to go seriously stir crazy. I have to say a massive heartfelt thanks to all those people who have checked in with me and offered support during these crazy times, it’s very much appreciated.

I decided I was just going to pop down the resi where I would hopefully get a few pulls on the feeder, looking back through the blog, I haven’t fished the resi since 2012 and I can’t believe it’s been that long! The weather was awful on Saturday and Steve P who was going to come said he might give it a miss if it wasn’t any better the following day but I would still go, even if it was just for a few hours.

I was awake early and it looked horrible outside, I messaged Steve who said he would stay home in the warm and dry, by the time I’d had a coffee and filled my flask, it had brightened up considerably. After loading the car and stopping off to get a paper, I pulled into the resi car park just before 8:00, there were two anglers already on the dam wall and I set up on their left and just to the right of the fishing platform. I was quite looking forward to it but then had a phone call from the Tart saying he was coming to watch for a few hours!

The wind was hacking into the dam wall which normally means it’s going to fish well but it was cold and the water was very clear. I just set up my 11ft Guru N-Gauge Feeder rod with a 30 gram cage feeder, a twizzled boom and a size 14 barbless B611 to 0.14mm. I’d mixed up some Bait-Tech Omen and Pro Nat Bream Dark and for the hook and feed I just had some dead reds and corn. 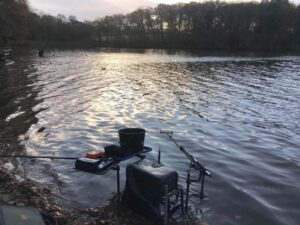 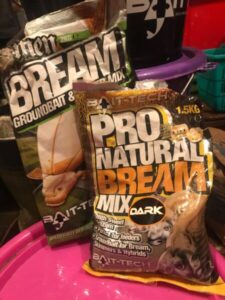 I settled on a modest chuck and put in half a dozen feeders with some corn and dead maggots before starting with three dead reds on the hook. The two lads to my right had both caught a couple of nice fish but were chucking out further than me. I did think it might take a while to get bites but after only ten minutes, a positive pull resulted in a little skimmer of 4-6oz. Next chuck I had a roach of a similar size so switched to corn to see if I could catch bigger skimmers or bream. 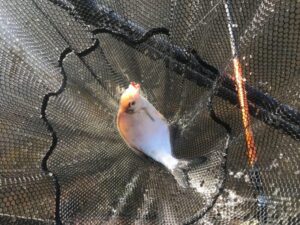 My first fish was a small skimmer

Then the Tart arrived and I was rather disappointed that he hadn’t brought along coffee or cake! I started getting some better skimmers around the 12oz mark but no bream as yet. The chap two swims up was catching really well and the bloke on my right was getting some nice bream so hopefully they would move up to me at some point. 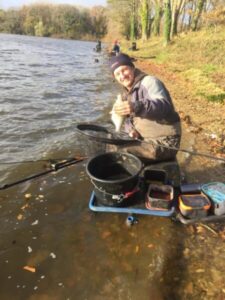 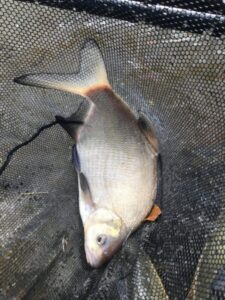 Some of the bites were quite tentative and spotting them wasn’t helped by the rather large waves buffeting the rod tip! If I’m honest, my casting wasn’t particularly accurate and as much as I love my N-Gauge rod, it’s not really the right tool for long-ish chucks and I was struggling to punch the feeder out and also braid would’ve aided bite detection. The Tart suggested going back to treble dead maggot and the next cast didn’t hit the clip but I thought I’d give if five minutes and just after I tightened up, the tip flew round and I was into my first decent bream. Thanks to Brendon for the (rather blurry) photo! 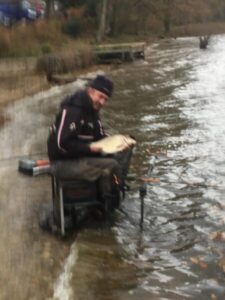 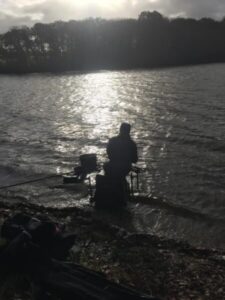 Derek Hounsell turned up and asked how I was doing, he said he was going home to get his gear and then fish over the other side, the heavens then opened and the Tart left me to it. I carried on getting skimmers along with the odd bream and on Derek’s return, he let me have a chocolate bar, cheers mate!

Despite it being cold and the fact I’m not a big fan of pleasure fishing, I was getting quite a few bites and enjoying myself, I initially thought I’d only give it a few hours and be home just after dinner but I was still there at three o’ clock. I was on 19 bream and skimmers (plus three roach) and said to myself I’ll get one more to make it 20 and call it a day.

My target was reached not long after but then I had classic case of the ‘one last cast’ syndrome! I bumped a fish so set my sights on one more fish, then I struck at a bite and it was solid, this felt like a good fish, nodding it’s head before it took off and snapped me! The possibility of it being a carp crossed my mind but I think it was a decent bream. The other two anglers had packed up and the guy on the end said he’d caught 27 bream all on hair-rigged double corn so I put on a size 14 hook with a bait bayonet on a hair and double corn to see if I could catch a nice bream to finish the day off.

I missed two seemingly unmissable bites and then hooked a fish which I thought was going to be a nice skimmer but turned out to be a 12oz roach (on double corn!). No more bites and with the light starting to fade I just wanted to catch one more skimmer or bream, single corn wasn’t the answer so I cut off the bayonet and hair and reverted to three dead reds but the light was going fast and I was struggling to see the tip so called it a day.

My final tally was four bream around 3-4lb apiece, sixteen skimmers averaging 12oz and four roach for about 1lb 8oz, so probably between 25-30lb, not bad for a cold, windy day in November!