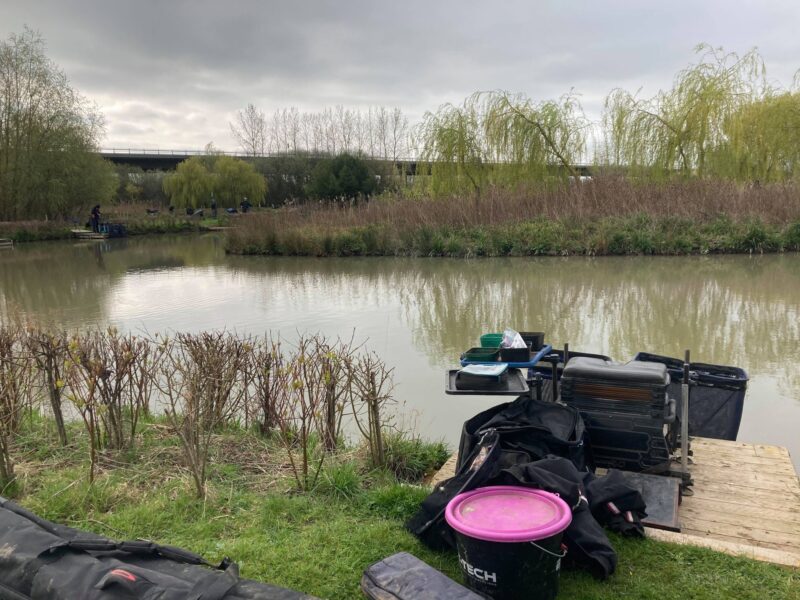 Even though it’s only been three months (just like the old closed season), it’s felt like a lifetime but match fishing is finally back! It was starting to look like matches would resume from 29th March, so with Easter weekend coming up, I booked into Summerhayes on Good Friday and the Monday with an Ilminster match at Dillington on the Sunday.

I was up bright and early and met Steve P at Greggs (which was thankfully open this time) for a sausage and bacon bap before heading to Bridgwater after negotiating Taunton’s answer to Spaghetti Junction! After pulling into the car park, along with the regulars I spotted a blast from the past in the shape of a certain Mr Heard and it was lovely to see him for the first time in years! One thing that was very noticeable was that everybody had rather long lockdown hair (obviously those that had hair!).

After paying my pools and collecting some nets it was time for Pete to do the socially distanced draw, I was fairly near the top of the list and was gutted when he pulled out peg 4 for me, slap bang in the middle of ‘Cyanide Straight’, this could be painful! Steve ended up on peg 7 which is a carpy corner but can produce silvers. Jeff who was on peg 1 gave me some hope when he said they’d been catching some nice bags of silvers pleasure fishing our pegs. 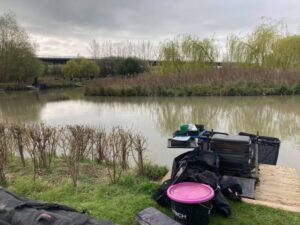 Peg 4 on ‘Cyanide Straight’ was my home for the day

I set up the usual 0.3 gram NG Mini Gimp to fish the top two lines straight out, left and right and then a Guru 0.3 gram AR for the top two plus one and two lines at 10 metres. Both had Guru F1 Pellet size 16’s to 0.10mm. On the side tray, I had 4mm Bait-Tech Xpands, dead reds, micros and groundbait was Special G Dark and The Juice mixed 50:50.

On the whistle I fed conker size balls of groundbait on all the lines apart from the left hand top two line which received a few dead reds and the left 10 metre line was fed with some micros. I started on the short lines but after 15 mins I hadn’t had a bite and Jeff had already caught a decent skimmer on his long line so I picked up the other rig and went out on mine. No bites there either and then Steve had a decent fish from his short line and when Jeff had another skimmer I was beginning to feel a bit like a tennis umpire!

Half an hour in, I hadn’t had a bite yet and was already starting to get a sense of how my day was going to go! Back on the top two line with double dead reds on the hook, the float finally went under and I had small skimbob followed by an even smaller one! A switch to an expander and a really positive bite resulted in my first decent skimmer. My next fish was a 3lb carp so it was time to swap lines again, I missed a couple of good bites at 10 metres on expanders but with an hour gone, I hadn’t got a pound of silvers yet! Both my neighbours had several decent fish already with Jeff landing a nice perch from in the edge, I’d been feeding down the left with dead reds and tried it a couple of times with no luck.

I had a second decent skimmer from the top two line but I just wasn’t getting many indications at all, not even from carp! Back on the longer line with dead reds I had a small fish and one come off on the way in but Jeff was creeping further ahead and now had five or six decent fish so it was looking like that pound was a goner but Steve P had slowed up and that nugget was still up for grabs.

Dropping back in on the top two line I had a good skimmer straight away, then lost one and came back with a scale on the hook, next chuck I had a carp that stirred up the bottom so I fed again and went back on the longer lines. A little lift bite resulted in my fourth skimmer but we were now halfway through the match and if I was going to do any good today, divine intervention was needed! Jeff had now caught three nice perch and lost one from his inside line yet I kept trying mine and was still waiting for my first bite there, the right hand short line was also a flop and the only bite from there was a carp.

I’d been carefully nurturing my top two plus one line all match and with two hours to go tried it for the first time and the float just sat there! Steve P had a nice crucian and that side bet was still hanging in the balance. Back on the longer line I stopped feeding micros and just put in little nuggets of groundbait and in the last hour had three decent skimmers, a small one and missed several bites to finish with a flourish but it was too little, too late. My final tally of seven decent skimmers, four small fish and three carp wouldn’t be winning any prizes today.

The scales started with Mike Bendall on 37, he had 16lb of carp and 6lb 6oz of silvers, Jeff was next and had a nice net of skimmers and perch weighing 12lb 5oz so I conceded yet another pound, I’d chucked back my carp and my silvers weighed 6lb 4oz so with three anglers weighed in, I was lying in third place and Pete was paying the top two in silvers, I’ll get my coat! Steve pulled his net out and it looked like it was going to be close until we removed a bungee strap he was trying to pass off as an eel! His weight was called at 4lb 6oz and the side bet score was back to 1-1. 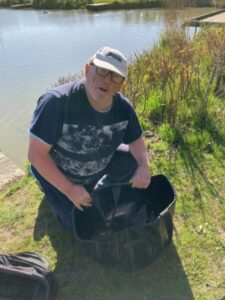 Jeff had a nice bag of silvers weighing 12lb 5oz 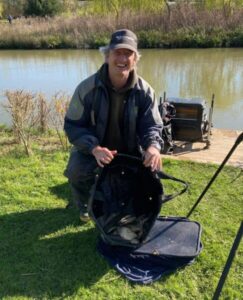 I weighed 6lb 4oz and my first match back was a bit of struggle (and I need a haircut!) 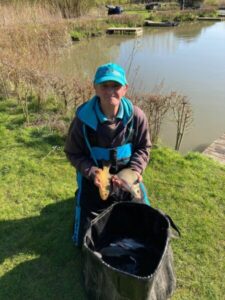 Chris M on peg 9 had 19lb 2oz, Mark Leahy weighed 30lb 1oz and then Rob Birch on 11 had 8lb 13oz of silvers but earlier had hooked a beast on his silvers rig and yellow hydro which he landed and was weighed straight away and transferred to Big 8, a stunning common carp of 23lb 9oz – well done mate! Paul H on peg 15 had 31lb 12oz then Kevin on 17 and Glynn on 19 didn’t weigh so the side bet score was 2-1. Photo credit – Rob Birch* 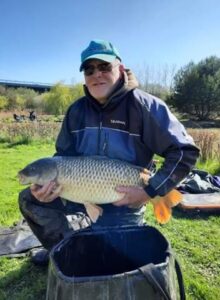 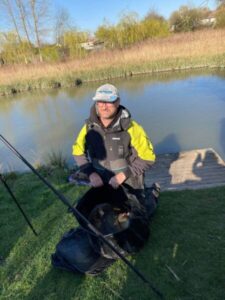 Jamie had the top weight with 95lb 7oz from peg 35

So although a bit of disappointing day for me, it was still great to be back fishing matches and I’m looking forward to the next one already.