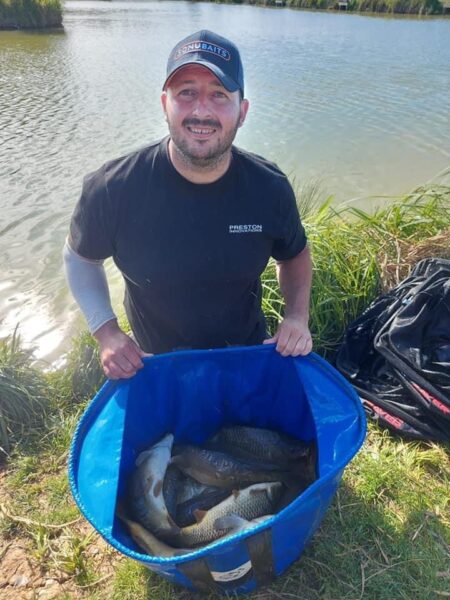 So far this year, my fishing has probably been more varied and challenging than ever before and although I’ve struggled I’ve also really enjoyed doing some different things. However, it has also made me realise my own limitations, to be consistently successful these days, realistically you have to concentrate on a few venues or a couple of methods because it’s no coincidence that you see the same names in the frame every week at certain venues. That’s not to say that there aren’t a lot of very good anglers out there who can compete on a variety of venues but to be able to do it at any venue on any method, that’s Des Shipp/Matt Godfrey/Will Raison territory.

Which brings me onto my first ever Fish’O’Mania qualifier at the mighty Todber Manor, I was under no illusions that spotting a three legged unicorn being ridden by a one armed monkey up Chard high street would be more likely than me qualifying for the final, but I was still really looking forward to it. The draw was actually live on Facebook the day before and like most people I was hoping to avoid the White Post and Wadmill lakes with the latter a bit of an unknown quantity. The favoured draws were Homeground, Hill View and Ash, in that order, with HG 90 the one everyone wanted.

The draw got underway and lots of pegs were coming out on Wadmill and Top White Post but there seemed to be loads left at Bottom White Post and I had this horrible feeling that’s where I was going to end up, peg 90 was also still left in there and then my name was called. The guy delved into the bucket and pulled out…… Hill View 52, from my limited knowledge it wasn’t bad and has done well in the past although probably not one of the really fancied pegs, I was just relieved I’d avoided the off-site lakes.

Up bright and early, I made good time and on arriving the first person I saw was Paul Holland which just made me realise how out my depth and comfort zone I was. I ordered a nice roll from the food van and sat eating it while more and more big names started arriving, Des Shipp, Neil McKinnon, Andy Power, Pete Upperton, Tony Curd, Nick Speed (who’d travelled 4.5 hours to get there) and the Welsh contingent in the shape of Guru’s Mikey Williams and Preston’s John Harvey. There was also loads of local talent like Ben Hagg, Bobby Gullick, Mark Harper, Dan White and Tucks among others.

I’d just finished eating when Chris Norton turned up, he was down at White Post as was Andy Downton who arrived not long after. After popping into the shop and buying a couple of pints of dead reds and some bits and bobs, I had a nice chat with Gary Thomas and Bobby G before heading to the lake. For those that don’t know Hill View, there’s a spit with pegs 44 to 53, pegs 48 and 49 are on the point with 50-53 up an arm of the lake. It looked really nice with loads of fish cruising around. 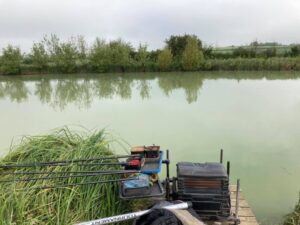 For company I had a chap called Alan Crouch on my left who was from Exeter way and Andrew Palmer on my right. I set up a Drennan 0.4 gram Carp 1 for the top two plus one line, a Drennan 0.3 gram Crystal dibber for fishing shallow and two little handmade patterns for the inside to the right, one for banded pellet and one for maggot. I had plenty of Bait-Tech 6mm Carp & Coarse Pellets plus several pints of dead red maggots and some micros.

On the whistle, I went straight on the top two plus one line, regularly feeding a few 6mm’s and pinging a few out on the 11.5 metre shallow line. I was into small carp quickly and had three in the first ten minutes and after half an hour I was up to seven and started to get a bit giddy as I visualised climbing the steps of the podium to collect my big winners cheque! Both my neighbours were getting some nice carp on the method and everywhere you looked, there was elastic out and rods bent over.

I was soon back to reality with a bump as bites started to slow up and as we reached the end of the first hour I’d only added three more fish and it seemed to be the same for those around me. Picking up the shallow rig, it was equally slow and although I missed a few bites, I only had one fish on it and back short only yielded a few more carp. Nobody seemed to be setting the world alight on our bank but I could see Ben Hagg over on 57 netting fish regularly and Mikey Williams behind me on 44 was catching well.

With two hours gone, I fed the margin with two big pots of bait but would leave it until either I saw fish or the pegs either side started catching from their inside lines. I was still getting odd fish from the top two plus one line but nowhere near enough to do any good, either side of me they were swapping between the feeder and pole but also struggling.

The third hour was better and I started catching well again from the short line, including some bigger fish although annoyingly, I had two come off at the net. The penultimate sixty minutes saw things improve further and I began to think a good weight was still possible. I’d been potting in dead maggots and micros on the inside but still hadn’t seen any signs and Andrew had been fishing up to his inviting looking end bank but was only getting small tench and the odd carp.

I did have a quick go in the margins but only hooked a small fish on a bunch of dead reds and that fell off, so I spent the remainder of the match fishing the short line with banded pellet to finish with 39 carp. In the Club Angler qualifier I’d had 30 fish for 92lb so hopefully a bit more today. I packed up and awaited the scales which were already working their way around the lake, the bankside grapevine was saying that Ben Hagg had done a big weight and that John Harvey on 90 had eight keepnets in!

The rest of our section were over the other side which included Ben on 57 who weighed a staggering 282lb 14oz, second in the section was Rob Jones who had 187lb from 61. As I loaded the car, Mark Harper and John Harvey turned up, he’d weighed 322lb 6oz to win the match and qualify, John’s had a rough time of it lately, losing his fishing kit and also suffering some nasty burns so it was fantastic to see such a thoroughly nice bloke go through to the final, well done mate, I hope you go all the way now. Photo credits – John Harvey* and the Angling Trust** 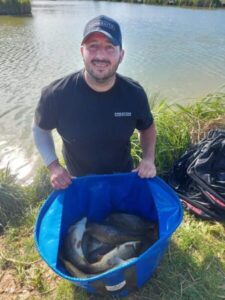 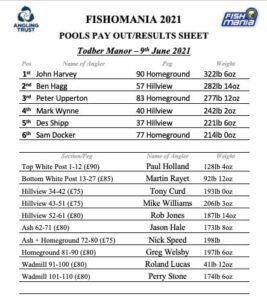 As I alluded to earlier, lots of familiar names in the frame**

By the time I got home after picking up a chinese takeaway I was absolutely shattered and I nearly fell asleep in my meal! Looking at the results, there’s lots of well known names there, in some cases anglers who’ve never seen the venue before but know how to catch big weights of carp. As expected White Post was hard going and Paul Holland showed his class by being the only angler to break the ton, Perry Stone was top at Wadmill with 174lb and lost some big units.

There were several ‘no shows’ and with drawing the day before, I’m not really sure how the AT can stop this as in some cases it looks like the empty pegs have benefitted the anglers next door. People have suggested they shouldn’t be allowed to enter again but there could be genuine reasons like family emergencies or vehicle breakdown and it would seem a little unfair to get banned for something out of your control. So I don’t know what the answer is, maybe a three strikes and your out rule or something!

On a personal level, I really enjoyed the experience and would give it another go next year. I didn’t disgrace myself and felt I’d fished a better match than the Club Angler qualifier as I didn’t lose as many fish but I find it staggering, that to win, I’d have needed over three times what I caught! My fish averaged around 2.5lb so for 300lb I’d have had to have caught 24 fish an hour and I’m not even sure I’m capable of doing that. I had three fish in the first ten minutes and thought I was doing well but that would still only be 18 fish an hour. Catching bigger fish is probably key then but I can never get my head round fishing the margins and have no confidence in doing it.

It does make me laugh when you see letters in the angling press or stuff on social media that there’s no skill in catching big weights and it’s not proper fishing, like any method in angling it requires a huge amount of skill. As regular readers of the blog will know, it’s not really my cup of tea and I wouldn’t want to do it every week but it doesn’t stop me appreciating how good anglers that do it are.

Lastly, if you’re looking for a present for Father’s Day, how about a copy of Billy Makin’s new book – The Golden Years, it’s a great read so drop me a message if you’d like a copy.