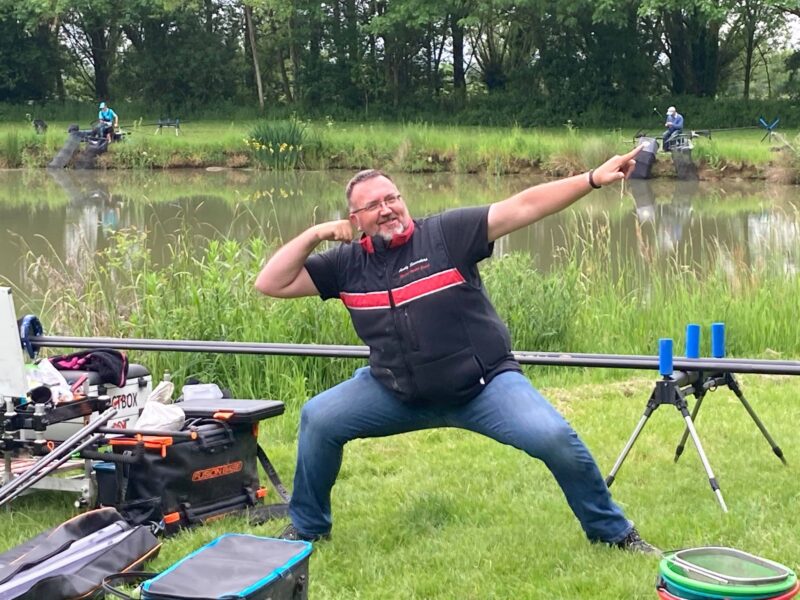 After re-visiting the Viaduct for the first time in years last weekend, I’d booked into another Stoke match, this time at Thorney Lakes. I have pleasure fished it a long time ago, with Arf if I remember correctly and we caught a few fish, mainly roach and the odd crucian carp. I’d seen some recent photos and captures on Facebook of decent skimmers, small carp and even golden orfe and it looked like if could be good.

As there was an Ilminster match on at Dillington, we stopped at the bowling club for breakfast and it was pretty busy with a few Stoke invaders there as well. The food and service was excellent as always and along with the ever present banter, it just starts the day off on high note. We then headed to Thorney in convoy and as we arrived, the car park was already nearly full as there were 23 anglers booked in, which is a brilliant turnout for a club match.

As is the norm these days, a rolling draw was in place, I paid my monies and young Sam drew my peg which was number 15, this obviously meant nothing to me although apparently I had to turn right when I got to the lake and my peg had an island chuck. As I neared my swim, I could see I had ‘The Toast’ on one side of me with Andy S on the other, so it should be a laugh although even at this early stage I was starting to worry about Andy’s sanity! 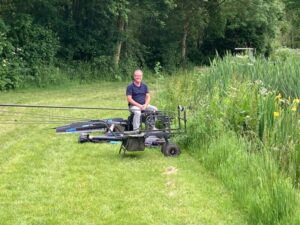 The Toast was next door….. 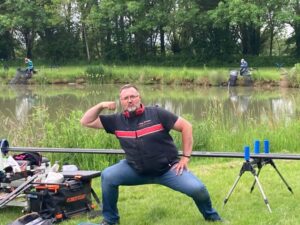 with Andy on my right 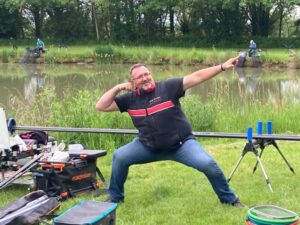 I already had an idea of how this day was going to go!

All the pegs looked lovely with loads of features and there was the odd fish moving about. I had heard several people say the lake was very shallow but had a bit of a shock when I attached a fairly short rig and went to plumb up and found only twelves inches at top two plus three and it didn’t really vary all the way out to 14.5 metres! That rig got put away and was replaced with a little Guru 0.3 gram AR that I use for shallow fishing and then set up my 11 ft Guru N-Gauge feeder rod with a little hybrid feeder for fishing against the island. With quite a few overhanging branches, there was lots of potential for disaster as I’ve not done much feeder flinging for carp. 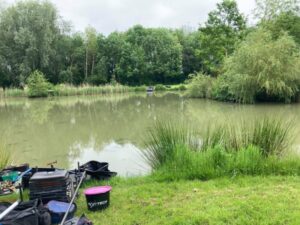 All the pegs looked lush with loads of features

As I wasn’t sure what to expect, I had loads of different bait options with me, maggots (dead and alive), casters, worm, micros, expanders, Bait-Tech Special G Red and then 6mm’s and corn in reserve. On the whistle I cupped in a pot of loose groundbait on the pole line before picking up the rod and reel thingy, I put on a white Bait-Tech Juice Wafter, loaded the feeder with softened micros and let fly. To be fair it wasn’t a bad effort and landed in fairly close proximity to the island!

I was sort of expecting a bit of a wait as some of the lads had been out for a practice the week before and it had been a bit of a struggle. After only a few minutes, I was getting the odd little knock and then the tip flew round – fish on! It was only a little carp of a pound or so but it was scrapping well in the shallow water and I was getting lots of encouraging comments from around the pond, hoping I’d land it safely (yeah right!). There was quite a bit of weed in front of me and the fish ploughed through it several times, I got the landing net ready and the hook pulled out – bugger!

Next chuck I hooked another and that came off as well, I was using a Guru QM1 and the bloody things don’t come out your finger that easily! Around the pond, quite a few small carp were being caught, Andy was fishing the pole (yes the pole!) and catching some chunky roach and then Steve P struck into a big fish that took him all over the place. Josh Tucker on the next peg landed several little carp while Steve was playing his beast from the deep (well, not so deep!) and then after 20 mins it came off and he grumbled a little bit!

I was getting quite a few liners and it felt like there were a few fish there, I finally landed the next fish, a ginster about 1lb, to get off the mark. I lost another and then hooked a fish that straight away came to the top and I could see it was a nice bream of around 4lb, that’s more like it! Over the next hour or so I had a couple more little stockies and lost another and from what I could see I was doing alright. Terry was struggling but Andy was still catching on the pole (yes the pole!) and had landed several little carp in amongst the roach.

Jake B on the opposite bank was catching quite well although I couldn’t see Dave P or Matt Adams who were both behind the island. Two hours in, bites slowed up on the feeder and after trying different colour wafters with no success, I decided to rest it and come in on the pole line. Andy was still getting odd roach but I couldn’t get a bite so after half an hour or so I chucked the feeder out again and did hook another carp but that came off as well and the scores on the doors stood at 4-4 so definitely room for improvement.

I was fairly pleased with my feeder flinging, there had only been a couple of ‘no balls’, a wide and I’d only gone squirrel hunting once! I did manage a 4oz skimmer but I’d gone from getting loads of indications to not catching much. Paul Adams came round and said they were struggling down on the other bit of the lake and that his lad, Matt, behind the island, had caught a couple of decent carp with one around 8lb and some smaller ones so he was right in the mix at this stage. With Scott Cousins catching small carp well on peg 13 and Jake and Josh still netting fish regularly, I thought my best bet would be to go for silvers and try and add to my bream.

The Toast was still waiting to put a fish in his net and was now trying paste by the reeds to his left, the float went under, there was a crash, bang, wallop and lots of splashing as the carp tore through the reeds and the score was 1-0 to the fish. Andy had also put his big boy pants on and was fishing 16 metres towards the island and hooked a fish which he got away from the reeds, only for the hook to pull out and he had a very pained look on his face (it might have been trapped wind!). Although I couldn’t see Matt, apparently he was into a lump and after a lengthy battle, he landed a rather nice bonus of 13lb which was weighed straight away and returned.

Back on the pole with single red maggot, I was toss potting in maggots and some loose groundbait and started to get a few bites from chunky skimmers and roach but was bumping quite a few off and knew a lighter elastic would be better. After losing several on the bounce (literally), I got off my box an switched to a Daiwa pink Hybridlastic, that was better but I was still losing the odd one. I did say to Andy that I was bound to hook a carp now and low and behold, a few minutes later, the float went and the strike was met with solid resistance. The fish headed towards the island with elastic everywhere before the hook pulled and the rig spangled around the pole tip!

While I was faffing about, trying to sort my mess of rig out, Terry lost another (2-0) and then Andy hooked a fish on his heavy rig which went straight in the reeds and snagged him solid and he didn’t know what to do next, he looked towards the heavens for divine inspiration but none was forthcoming. With the fish long gone, he had to pull for a break and there was a almighty TWANG and he lost the rig, elastic and everything. I did suggest he could probably walk across and get it without getting his feet wet!

I finally got back fishing and managed a few more fish including a small perch, then there was another commotion from Terry’s peg as the carp made it 3-0! I hooked a nice skimmer of 4oz or so which as I shipped back got caught round those pesky weeds in front that had given me no end of trouble and despite adding sections to try and get the fish out, I had to ship back and grab the elastic, the fish came off and the rig spangled round the pole again!

There were two sets of scales, one doing the pegs to the left and the other set doing our side, starting with Derek G on peg 12, he had 1lb 12oz of small carp and then some nice roach for 3lb 15oz, Scott C weighed 26lb 6oz to go into the lead, The Toast had lost 3-0 to the fish and then my little carp went 3lb 3oz before the silvers weighed 5lb 14oz. Andy had 9lb 7oz of carp and 2lb 1oz for a total of 11lb 8oz. 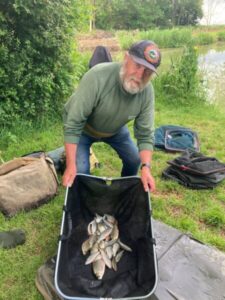 Derek had some nice roach for 3lb 15oz 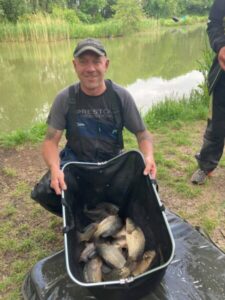 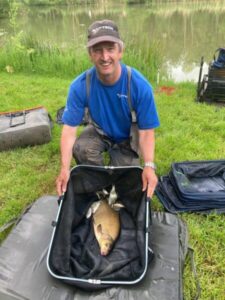 Sam H weighed 3lb 7oz from peg 17 and then Dennis had 3lb 12oz of silvers next door, Steve P had chucked back an eel and a carp so I ended up all square on the side bets. Josh had a nice bream plus some small carp for 15lb 1oz and then Matt added 14lb 4oz to his earlier fish to go into the lead with 27lb 4oz. Dave P had 5lb 10oz of silvers and 9lb 7oz of carp and then the last angler on our bit of the lake was Jake who weighed 13lb 2oz. Photo credit – Matt Adams* 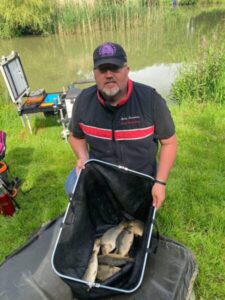 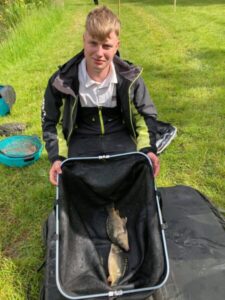 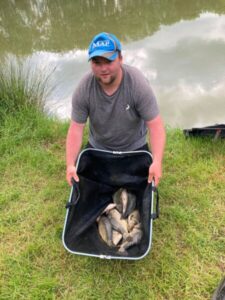 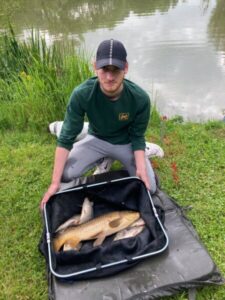 Matt had some nice carp to win with 27lb 4oz… 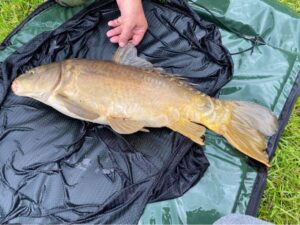 Including this lump of 13lb!* 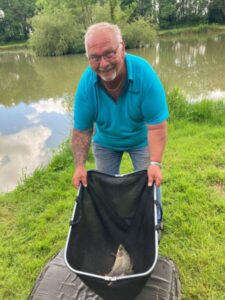 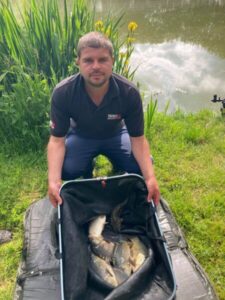 Back at the results and the other section had been fished hard, Lee Tucker had the best weight there with 10lb 8oz and the top silvers that side was Chris Norton with 4lb 8oz which included a nice bream.

So just another brilliant day, lovely breakfast, loads of laughs with a great bunch of people and I won a little bit of money, for me, that’s what match fishing is all about. Can’t wait for the next one.

And if you’re looking for a present for Father’s Day, how about a copy of Billy Makin’s new book – The Golden Years, it’s a great read. If you would like a copy, just give me a shout.

Next up – Fish’O at Todber Manor