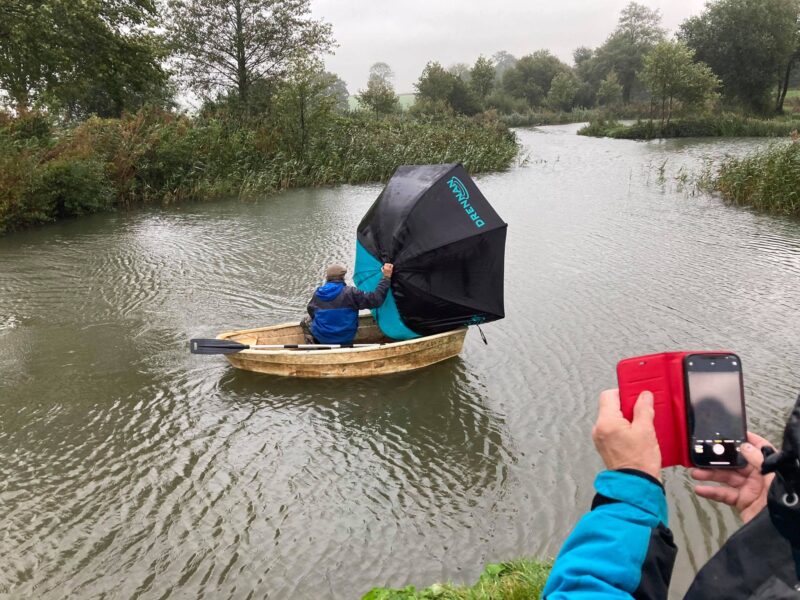 After three really enjoyable matches at Revels, I was back for another go and Parker ‘The Pole’ was once again joining me. Typically the weather had been gorgeous all last week but the forecast was grim for today – lovely! We had a really good breakfast before heading off to the fishery.

Despite the rubbish weather, there was still a good turnout of 17 anglers including silvers maestro, John B, who said it had been hard last Tuesday with just 7lb needed to win the silvers although Nigel Bartlett had an excellent 18lb from peg 2 on Sunday. When it was time to draw, John got peg 10 which he didn’t look too impressed with and I was third on the list and got number 21 which apparently is a decent silvers area. Steve got 16 which is one of the noted carp pegs so we decided to have a nugget on carp and one on silvers.

My swim looked nice with a gap between two islands, Bob Crisp was next door on 20 which is a good silvers peg and he won off it the last time I fished. I set up two 0.3 gram Guru AR floats, one with spread shot and the other with a bulk and two droppers, both had size 18 Guru Match Specials to 0.10mm at the business end. Plumbing up, it was a nice depth at 10 metres, about 4ft and after the last match, I intended to feed two swims and alternate between the two. I didn’t bother with an inside rig as it was gin clear and you could see the bottom. 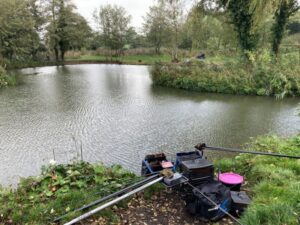 I had plenty of bait with me as after the Isle match on Sunday, Andy S had let me have his leftover bait, around two pints of maggots and some disco pinkies. When I got home, they were a little sweaty and I thought I had some maize but couldn’t find it, although I did have a big tub of turmeric so added a liberal helping which seemed to do the trick and they looked and smelt great. I also bought some casters from the shop in the morning and I brought along some dead reds and Bait-Tech Special G Dark and the Juice groundbait.

On the whistle I cupped in a small ball of groundbait on the line angled to the left, a bigger ball straight out in front and then potted in some casters on a throwaway line at 10 metres to my right. Bob had started on his usual whip approach and before I’d finished feeding, he was already off the mark with a roach.

As per usual it took about ten minutes for me to get a bite and my first fish was a 3oz perch, I’ve then had a really nice spell catching mainly perch from 1-4oz along with a couple of 4-6oz skimmers, all on single red maggot. I was toss potting in a few maggots every put in and also loose feeding a few over the top.

After an hour I had 18 fish for 2lb or so and despite the gusty wind, was really enjoying myself, Bob was still catching quite well and there was nothing between us at this early stage. The second sixty minutes was similar and every time bites slowed on one line, I fed some loose groundbait via the toss pot and moved to the other line for a couple of fish. By feeding and then resting it, I would normally catch a couple of skimmers quite quickly before repeating the process.

Going into the third hour, I decided to try caster for the first time and hooked a decent skimmer that I could see straight away in the clear water but as I started shipping back it came off and that killed the swim. The wind was being a real pain and just to add to the fun, we were getting a few rain showers as well. Over halfway through the match and I hadn’t hooked a carp yet which is just the way I like it, the same couldn’t be said for John B who’d been carped out and decided on an early bath.

After losing that skimmer, my bites had slowed considerably but I was still putting odd fish in the net and as in previous matches if I flicked the rig past my feed, it would quite often result in an immediate bite and I added some more skimmers along with roach and a couple of rudd.

Now, remember the turmeric I’d added to my maggots, with it starting to rain, I was managing to keep my bait dry but the same couldn’t be said for my hands and they were beginning to turn a rather fetching shade of orange! Not only that but as I was catching quite a few skimmers, the fish slime and the turmeric were mixing together to form a rather vibrant jaffa coloured paste. As I wiped my hands on my leggings, they were quickly coated in it, as I shipped the pole in and out, an orange film was covering each section and when I needed to have a mid-match pee, well you can guess the rest! It looked like I’d been Tangoed!

With a couple of hours to go bites were now few and far between so I decided to pot in some loose groundbait on both lines and try the caster swim which I’d fed from the start, I missed a couple of bites before catching a roach, switching to double maggot, the float buried and a carp headed off up towards peg 22 and snapped me, that was enough of that.

Back over the groundbait and the rest had done it some good as I caught two more skimmers in quick succession but then it had to happen as we approached carp ‘o’ clock and I started to hook a few, landing two around 4-5lb, one of 2lb and losing another. I was still getting the odd skimmer and roach and then with a few minutes to go, I latched into a right lump, eventually landing a big 10lb common after the whistle. 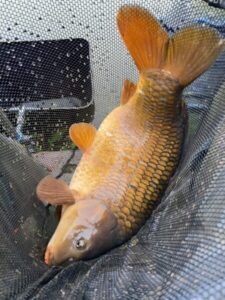 I had a lump right at the end

Despite the weather, I’d thoroughly enjoyed myself once again and finished up with 59 silvers (skimmers, roach, rudd, perch and gudgeon), in the last match I had 28 for 3lb 11oz so hoped I had around 8lb today. I packed up and went to see how Steve had done, the first thing I noticed was, there was a feature in his swim that wasn’t there at the start! 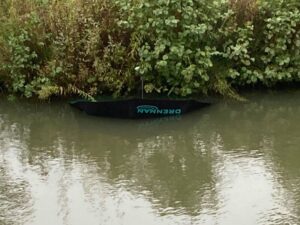 Steve ‘Mary Poppins’ Parker decided there weren’t enough features in his swim so added one of his own!

He said he’d struggled for a few bits and pieces plus a nice carp and he’d lost one so a double nugget could be heading my way. As the scales reached Steve, Nigel Bartlett was winning the silvers with 11lb 1oz followed by Neil Saxby with 8lb of accidentals and Alan Winsper was leading overall with 53lb 15oz. Steve weighed a couple of pounds of silvers and a carp of 7lb 11oz. Bob was next and had 6lb 4oz of silvers. 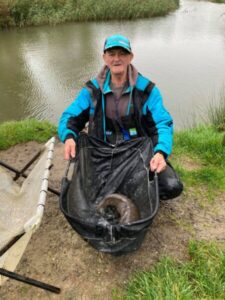 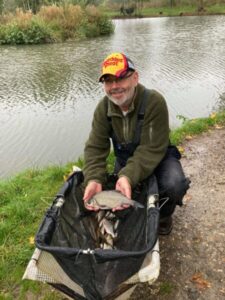 I was the last peg to be weighed, my four carp went 22lb 11oz and then I pulled my silvers net out and it ended up being closer than I thought as Dean called it at 10lb 8oz which put me second and my total of 33lb 3oz was actually third overall! I picked up £25 plus £2 off Steve. The fishery guys launched the boat (where’s Captain Pugwash aka Terry ‘The Toast’ when you need him?) and managed to retrieve the brolly for Mary Poppins so a huge thanks for that. 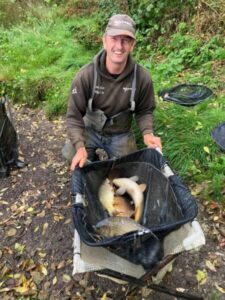 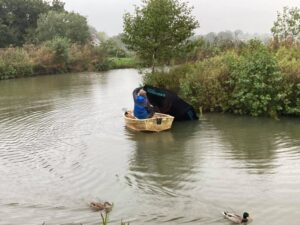 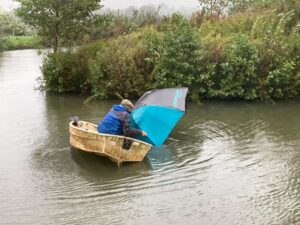 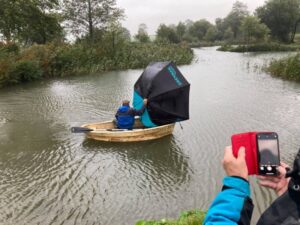 I have to say I’m loving it and can’t wait to have another go, obviously I’ve been drawing some good pegs which helps but it’s always a close frame, often just ounces. Also as the weights aren’t silly, it’s possible to frame with carp even if you’re fishing for silvers so it’s worth trying to land them.