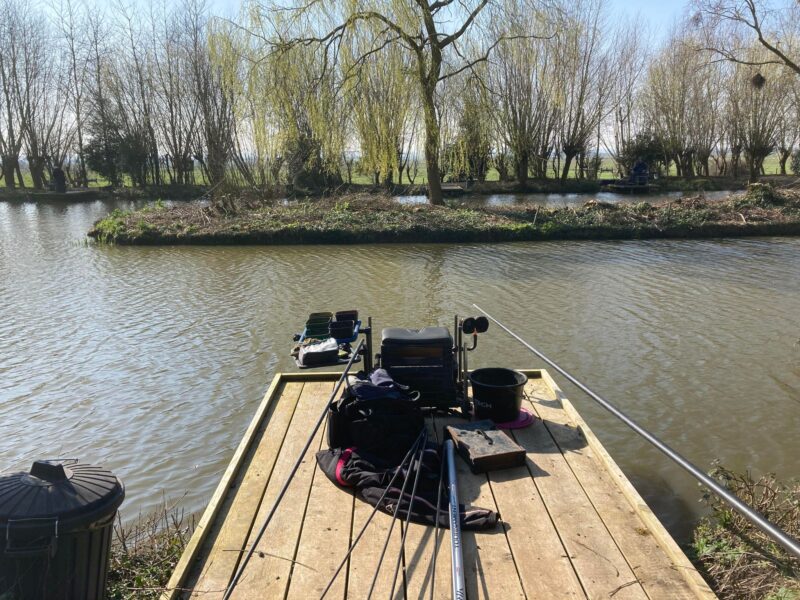 I’d only ever fished Landsend once, a long, long time ago, in fact I couldn’t even tell you which lake I was on! After seeing regular results on social media, it looked lovely with some cracking nets of silvers so I finally got my act together and booked in for one of their Saturday matches. I was awake before my alarm and one of the first to arrive at the fishery. The car park started to fill up quite quickly and there were lots of familiar faces including Roy Hughes who had very kindly picked me up some bait.

The draw was announced with lakes 2 and 3 being used and the payout would be the overall winner plus the top weight and top silvers in each section. I pulled out peg 7 on lake 2 and was up against some good silvers anglers including Nigel Bartlett on peg 1 and Roger Kimberley on 2. Colin Butler was on my left (peg 5) and then Alvin Jones was down on the end peg 11. 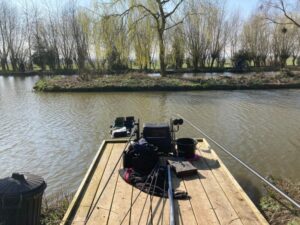 Plumbing up it was around three foot so once again the Guru 0.3 gram AR’s were assembled, one for two lines at 11.5 metres and the other for top two plus two where it was slightly deeper. Both had size 20 F1 Pellet hooks to 0.08mm. On the side tray I had maggots (dead and alive), casters, pinkies, micros, 2mm and 4mm expanders plus some Bait-Tech Special G Green and The Juice groundbait.

On the hooter, I cupped in two balls of groundbait straight out on the longer line, one short and then some micros at 11.5 metres angled to the left. It’s always quite exciting waiting for the first bite at a (nearly) new venue and after about five minutes the float sailed away and I missed it! The same thing happened next chuck before I finally connected with a fish on the third attempt and netted a nice roach.

A few small roach followed so I tried caster and after a short wait, a positive bite resulted in solid resistance from a lovely skimmer around 2lb. I did lose what felt like another skimbob but it was quite hard work battling a rather naughty wind. Alvin was getting some nice roach but at this early stage, there hadn’t been many carp hooked.

I was feeding casters on the short line as well as toss potting in micros and maggots on the two longer lines. The second hour was better and I had another skimmer plus a decent F1 (which count as silvers) and also hooked my first carp which palletized me. I was still catching the odd small roach and perch plus a couple of gorgeous little bars of soap but I wasn’t adding much weight to my silvers net.

As we approached the halfway point, a few more carp were coming out and Rod Wootton over on peg 16 was doing well. I had a quick look on my short line but only had a couple of roach so went back out and the rest had done my longer lines good as I had some more nice skimmers and another F1 but also got beat up by a turbo charged carp. Alvin looked like he was now bagging and I could see Nigel was catching small fish regularly.

With two of the six hours remaining, bites were dwindling on the longer lines so I refed them and had another look short. I had a brilliant spell catching two big skimmers, a couple of F1’s plus a chunky tench for about 5lb in thirty minutes. Resting it, I’ve gone back out but couldn’t get a bite so decided to spend the rest of the match short but after the initial burst of fish, it was slow there now as well.

I was just thinking I wasn’t going to get another fish and my match was ending with a whimper when the float buried and I had a 1.5lb F1 and then right on the whistle I had a gorgeous little crucian of 6oz. My final tally was 36 silvers (6 F1’s, 6 skimmers, roach, perch, tench and that crucian) plus three carp. Alvin had done well and was admitting to 27lb of carp and 25lb of silvers and Rod reckoned he had 60lb of carp.

The scales started with Nigel and he had loads of small fish for 17lb 4oz, Roger had struggled until the last hour when he had three big skimmers down the edge to weigh 13lb 3oz of silvers. Colin had 27lb 8oz of mainly carp and then my three carp went 13lb 1oz before I pulled my silvers net out. I thought I probably had somewhere between Roger and Nigel’s weights but it was academic anyway as Alvin would win the silvers, my silvers weight was 18lb 2oz which was better than I thought. Photo credit – Alvin Jones* 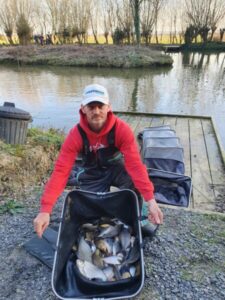 Alvin had 26lb 1oz of silvers*

Alvin’s estimates were pretty good as he weighed 30lb 7oz of carp and an excellent 26lb 1oz of silvers. In the section opposite, Rod had the best weight with 83lb 14oz and Mark Leahy was top silvers with 11lb 4oz from peg 13. On lake 3, Russ Peck won that section with 48lb 11oz from peg 66 and Roy Hughes had the best silvers weight with 16lb 15oz.

Back at the results and as Alvin won our section, I picked up the £30 silvers money which was a nice surprise and I was actually the second best silvers weight on the day so not too bad for my first visit in around 15 years!

So a cracking days fishing and I’m looking forward to fishing some more matches there, although it’s a little bit of a trek to get there and by the time I got home (via the chinese to pick up my tea), it was gone 7 ‘o’ clock and after I’d sorted my stuff out for the following day, it was time for bed!