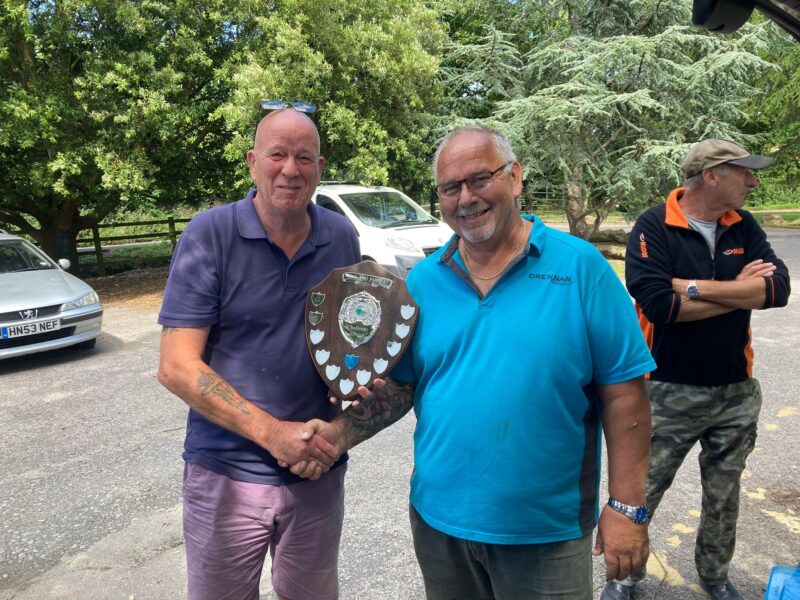 This is the fourth year the two clubs have contested The Isle & Parrett Challenge Shield and as the current holders we were keen to defend the trophy. The first leg was ‘away’ on the Parrett with two sections at Kingsbury and Parrett Works. The opposing teams would be on alternate pegs with ten points for a section win, nine for second and so on.

After breakfast we met at the recreation ground car park in Martock, I drew the ‘A’ set of pegs for Ilminster and then pulled out peg 11 at PW for myself, not one I would have run to. On past results, 2lb would be a decent weight from it. Elsewhere in my section Wayne C (Stoke) was on 4 with Leighton (Ilminster) on 5, Chris D (Stoke) on 7, Ilminster Dave P on 9, Stoke Dave P on 10, me, Norts (Stoke) was on 13, Parker ‘The Pole’ (Ilminster) on 14, Paul A (Stoke) was on 16 and Tony C (Ilminster) was on 17.

My peg looked lovely (but they all do) with overhanging branches to the left and some lilies towards the bottom of the swim. 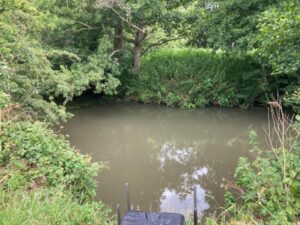 I set up a gram bodied rig for down the middle with size 18 Guru Match Special to 0.10mm and a similar float but 0.75 gram for fishing across to the far bank cover. Nice and simple side tray with maggots, casters and Bait-Tech Super Seed hemp.

The match got underway and I cupped in some hemp along with a few casters down the middle at 10 metres and then catapulted a few across. Starting down the middle with single red maggot on the hook, I had a gudgeon first chuck and then next run through (more like an amble through as there was virtually no flow!), a positive bite resulted in a chunky 2oz roach.

Then the float sailed away and a decent amount of elastic came out before I netted a nice roach around 5-6oz. I started getting a few minnows so tried double maggot and had a few more gudgeon, followed by another roach and then a decent dace, I was really enjoying this. Shipping back out, the float’s gone under but disaster, I bumped it and from catching quite well, all I could get was minnows.

I didn’t want to go across yet so put a caster on to try and avoid the minnows and it worked although now I wasn’t getting any bites at all! After about ten minutes or so, the float sort of slowly dragged under, it didn’t look remotely bite like at all, I half heartedly lifted the rig and there was a decent fish on! From the head shaking, I knew straight away it was an eel, it didn’t give me too many problems and at around 8oz, it was a handy bonus.

With around an hour and a half gone and probably 1.5lb in the net, I felt I was doing alright but the line down the middle had died a death and I didn’t want to go across yet. Back to maggot resulted in a couple of gobies and minnows but I couldn’t get a bite on caster. Sticking another section on, I’ve pushed the rig down by the lilies although a rather naughty wind was being a real pain blowing the pole all over the place and also making it difficult to see the float.

I thought I had a little dig on the float but it didn’t develop and when I checked the caster it wasn’t touched. A few more minutes passed and then there was no mistaking the next indication when the float buried. Elastic streamed from the pole tip on the strike and I had to give it as much welly as I dared to keep it away from the lilies but I was also very mindful of the 0.10 hooklength.

I unshipped to the top kit and with the fish in the middle of the peg, it was pretty well behaved and I slipped the net under a nice chub around a pound and a quarter which edged me closer to my 3lb target. Another ten minutes passed without any more bites and as we were now into the second half of the match, it was time to have my first look across.

I picked up the heavier rig, buried the hook in a caster and went over, I had a little knock straight away and I was sure I would get a few fish over there. But despite trying all along the far bank and going 13 metres down the peg to where the lilies meet the far bank, I’ve not had another bite on caster. I’ve spent the rest of the match swapping between both lines with maggot and caster but only added a few more minnows.

During the match Dave P and Leighton had wandered down and said it was fishing really hard so hopefully I’d done alright in the section. After packing up I wandered up with Norts to help with the weigh in and get some photos. It soon became apparent how difficult it had been, Wayne C weighed 3oz, Leighton had 10oz, Chris D (4oz) and then Dave Phillips on 9 had found a chub and a few bits for 1lb 10oz. 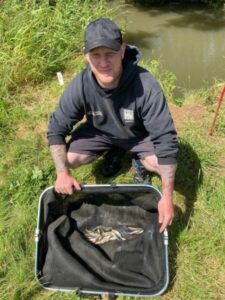 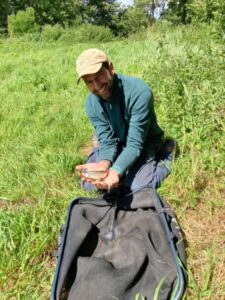 Chris Deedee had 4oz on peg 7 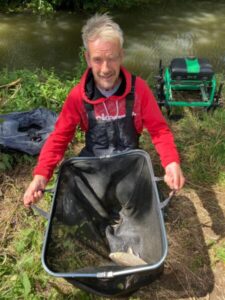 Dave Phillips had a chub and some bits for 1lb 10oz

Dave Pope weighed 4oz and then my fish (a chub, eel, three roach, a dace plus gudgeon and minnows) went 2lb 13oz, Norts had 6oz before Parker ‘The Pole’ weighed 14oz, Paul chucked back on 16 and then Tony C on 17 had caught some dace for 1lb 3oz. So I’d won the section which I was chuffed with from there. 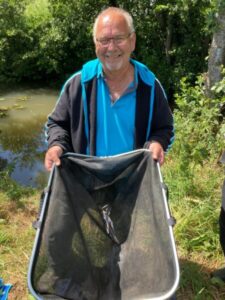 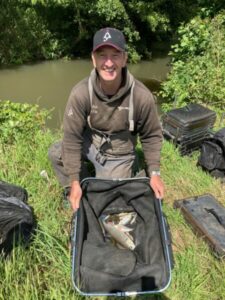 I weighed 2lb 13oz which included a chub, an eel, roach, dace, gudgeon and minnows 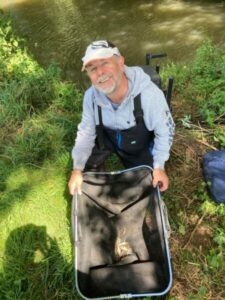 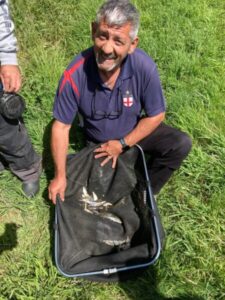 When we got back to the results, apparently Kingsbury had fished just as hard with Terry ‘The Toast’ having the top weight there with 2lb 7oz which meant I was actually the top weight on the day! Dave Hilton was second at Kingsbury with 1lb 11oz followed by Danny Blunn with 1lb 4oz. Thanks to Danny for the photos* 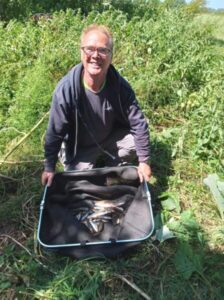 Terry had the top weight at Kingsbury with 2lb 7oz* 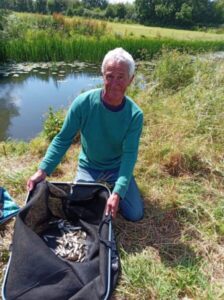 Danny had 1lb 4oz to win the section*

Once the points were totted up, the scores were,

so a healthy lead to take into the second leg on the Isle, but will it be enough? 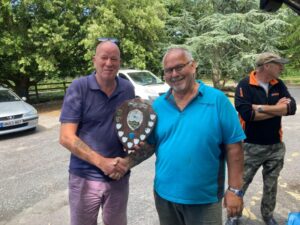 Will a 25 point lead be enough for us to retain the trophy for another year?

I picked up £55 for winning on the day plus a nugget from Steve P which sees the Nugget-O-Meter climb to £106. 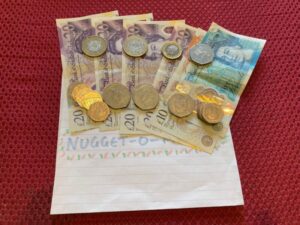