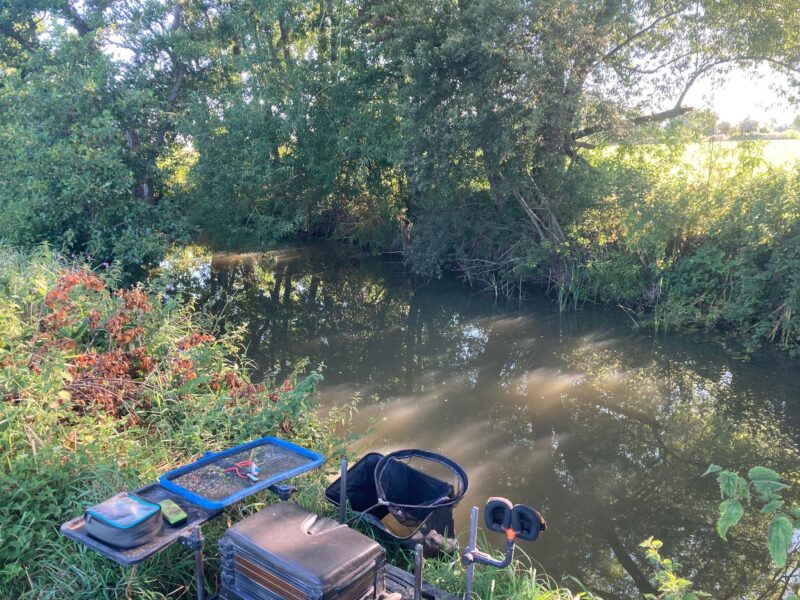 After doing well in the previous two matches on the Parrett, I was looking forward to this one, although it was due to be scorching hot which wouldn’t do us any favours. We were at Parrett Works again and there was another great turnout of 18 anglers fishing this one. The draw was announced and I had a mental wish list of the pegs I fancied but when I pulled out peg 7, that wasn’t on it! It was a fairly consistent peg last year but so far this time around it had done 2lb 3oz and 4oz.

The Grand Wiz was above me on peg 5 and Mark Dibble was on peg 8 which hadn’t been used for a while, The Hiltons were on pegs 9 (Dave) and 10 (Russ) with Derek on peg 11. At the top of the section Rob Wydle was on 1, Terry on 2 and Rob C on 4. In the other section Nick had drawn 16 and would be hard to beat.

My peg certainly looked nice and better still, was nice and shaded. As I was setting up, a decent fish topped down the peg and I really fancied it. Plumbing up, the depth was a bit all over the place and there was hardly any flow but I still thought I might do okay. I set up a 1 gram rig to fish the deepest part of the peg around 10 metres to the left and then went to put a 0.75 gram version on but noticed the eye had come away from the float. With no duplicate in my box (schoolboy error!) I asked the anglers around me if they had any superglue, everybody was saying no, although Russ did say he had some tape (helpful!). 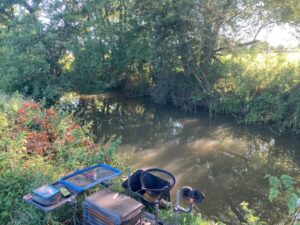 I walked up to the Grand Wiz and then Rob but they couldn’t help and I was just about to give up when Terry wandered down and said he had some. Tube of glue in hand, I went back to carry out essential repairs but anybody who knows me will probably be thinking at this stage that me and glue is a bad combination and they would be right! At one stage I was in danger of most of my fingers being stuck to the line, the float and and each other! After ten minutes of swearing and unsuccessfully trying to get the eye back in the hole, I snapped the float in half and put on another 1 gram rig which was probably too heavy for the job.

There was just about enough time to slap some sun cream on and I was having a wee when the whistle went, thankfully the glue had dried before I embarked on that task! I cupped in some hemp and a few casters down the middle and started with single red maggot on the hook. You normally get a few fish quite quickly but it took ages to get my first bite from a small gudgeon, a few more followed but the lack of dace and roach was worrying.

With half an hour gone, I finally had a roach but it was that small, identification was slightly doubtful. My tally of five gudgeon plus that roach(?) and a few minnows wasn’t good so I decided to have a look across a lot earlier than I would have liked but I didn’t want to miss the boat before it got too hot and bites stopped. It was a little shallower across and there was a bit of flow, edging the rig through, I had a little dig after five minutes or so and then the float sailed away, I struck a decent fish shot under the far bank. The black hydro and a 0.12mm hooklength did its job and I netted a nice 10oz chublet that I thought would be a massive bonus today.

I did miss a bite and then shortly after, another positive bite resulted in a decent fish which I initially thought was another chub but turned out to be a 12oz roach, a lovely fish. It wasn’t fast and furious but when I added a 2oz roach, it felt like there were some fish there. Some splashing from the right followed by a little whoop by the Grand Wiz, told me he’d netted a good fish and not long after some ripples came up from Mark’s swim and I think he’d landed an eel.

No more bites across so I went back down the middle but it was painful and I only added a few more gobies and minnows on maggot and I couldn’t get a bite on caster. Dave H stretched his legs a couple of times and said he was struggling but was being rather vague about how Russ was doing. I was itching to go back across and had a minnow followed by a 4oz chublet but that was my lot. Despite trying all along the far bank, I haven’t had another indication but still thought I was doing alright until Russ said he’d had 3.5lb, I thought he was winding me up but he’d caught a big chub plus a couple of dace and several eels!

With about an hour to go, Neil P came for a wander and reported that they were struggling above me apart from Rob W who’d caught some nice roach early and GW who’d had a big chub and some roach. Knowing I needed another bonus I started upping the feed but never had another bite, I did see Russ net a decent fish which turned out to be an eel. The whistle went to end a disappointing five hours for me and I packed up before going up to watch the weigh in.

Rob W, who said he doesn’t fish rivers very often, had done brilliantly catching some nice roach and dace in the first half of the match to weigh 3lb 5oz. Terry had struggled for 15oz of mainly gudgeon and minnows and then Rob also had a similar catch weighing the same. The Grand Wiz had a nice bag of chub, roach and dace weighing 4lb 10oz with the chub an impressive 2lb 10oz which puts him in the driving seat for the biggest of the season. 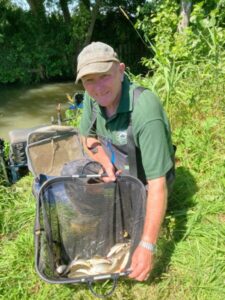 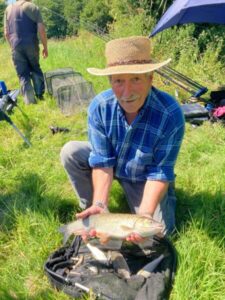 The Grand Wiz had 4lb 10oz which included a lovely chub

My fish went 1lb 13oz, Mark had an eel and a few bits for 14oz and then Dave H weighed 1lb 2oz which included some dace. Russ was next and had a nice chub, five eels plus a few smaller fish for 5lb 11oz which was a great weight on the day, the last peg in our section was Derek who had 1lb 4oz of mainly gudgeon and minnows. 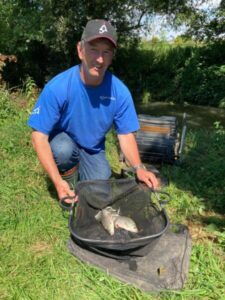 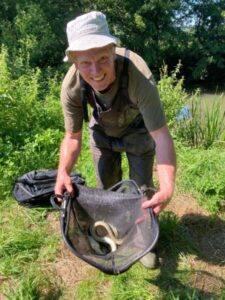 Mark had 14oz which included an eel from peg 8 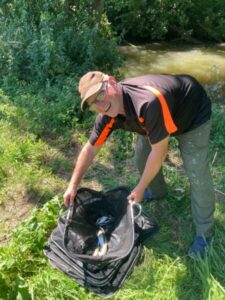 Dave H had dace, gudgeon and minnows for 1lb 2oz from peg 9 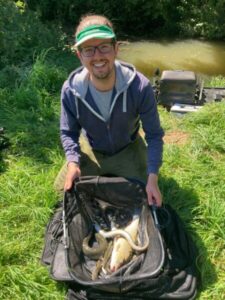 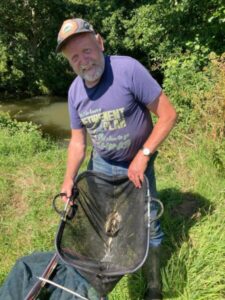 Back at the results, I was expecting the other section to have been hard going as well but relatively speaking it had fished really well with nearly everyone breaking the 2lb mark. Nick P had the top weight with three chub for 6lb 1oz but had lost several as well, Jenny on 29 had some lovely big roach for 3lb 5oz as did Cliff next door on 28. Parker ‘The Pole’ had 2lb 14oz of roach and an eel, Danny B on 17 weighed 2lb 11oz and Chris Deedee on 32 had 2lb 10oz including a nice chub and he’d lost one as well. Bob had 2lb from peg 31 and Dave P weighed 1lb 3oz of small fish from peg 23. Thanks to Nick Payne for the photos* 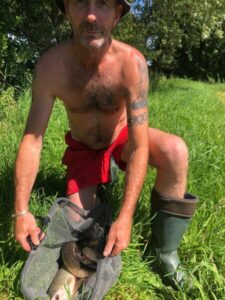 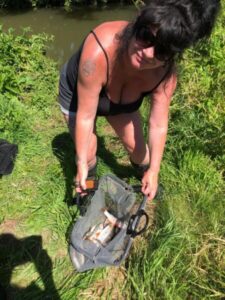 Jenny had some quality roach for 3lb 5oz from peg 29* 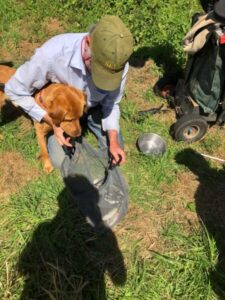 Cliff and his furry friend had 3lb 5oz from peg 28* 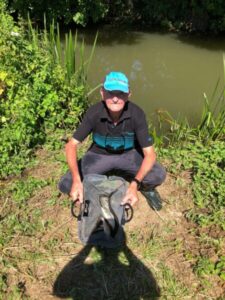 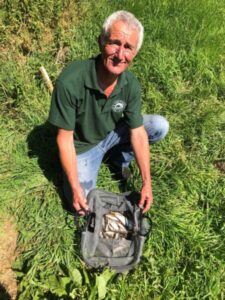 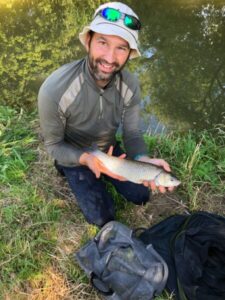 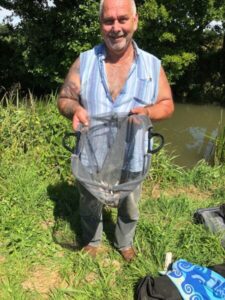 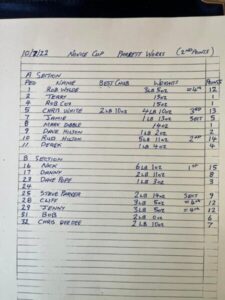 I actually picked up a tenner for winning my section by triple default (I’m not proud!). There was a fiver in the side bet kitty and Nick very kindly donated it to the Nugget-O-Meter which now stands at £123 and is continuing to build nicely. 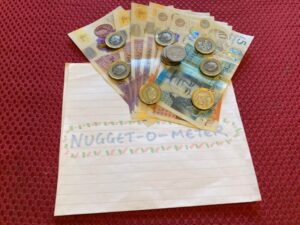 After getting the river series off to the perfect start, I was gutted not to get another good result and will have to drop this one. As it stands Grand Wiz with 27 pts and Nick on 25 pts are leading the way with two good results each. I have to say I love the Parrett but I’m also well aware that she can be a fickle mistress and just when you think you’re beginning to get your head around the fishing, it kicks you squarely in the plums!