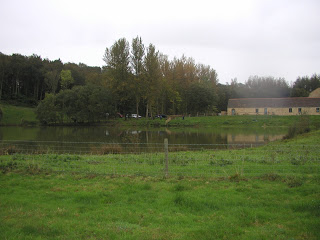 This weeks focus is on Dillington pond, a lovely lake on the Dillington Estate, it’s an irrigation pond with 24 pegs and I’ve been fishing it since it opened in 2006. It’s an Ilminster AA water and you can find the details on the website address listed below. It’s absolutely stuffed with fish and the main species are roach, rudd, perch, chub, eels and bream. Tench and crucian carp have also been stocked although they are seldom caught (I’ve only had one small tench in 7 years!), some carp have also found their way into the pond and they can often be seen basking on hot days.

Club licences can be purchased from Mark Nicholas at Ilminster Warehouse, Ditton Street, Ilminster, Somerset and the fees are as follows

As you drive in from the main road, if you turn left there is parking right on the left hand side on the hard standing and over on the opposite bank you can drive round and drop your gear off but there is no parking on that side.

The main methods are the pole and fishing the whip, with large numbers of roach, rudd and perch, the whip often scores well in matches with weights ranging from 10-20lb being needed to win in the summer. The groundbait feeder can be good for skimmers and the odd bream. There have been reports of perch to over 4lb and even 5lb but I can only vouch for ones I’ve seen and caught, personally I have had them to over three and seen numerous fish of that size caught, Roger Russell had three in a match for over 10lb.

The bream are a good size and again there have been reports of fish to over 8lb which I can’t verify but fish over five are regularly caught and one was weighed at 6lb 3oz in a recent match by Robin Cox. I’ve seen a few carp caught around the 10-15lb mark and the chub have packed on weight with the average size between 3-4lb.

The waggler can also work well, fished up in the water with maggots or casters sprayed around the float. Carp anglers fishing boilies with PVA bags of feed have been enjoying success and also catching the odd bream. Perch and chub have been caught on small spinners by anglers pleasure fishing.

During the winter the match weights can vary depending on the temperature but bites can normally be found by scaling down and cutting back on the feed and matches can be won with anything from ounces to 15lb. The pond has several feeder streams and can fish very well after heavy rain as it colours up although too much and the fish shut up shop.

Pegs all round the pond fish well although peg 2 is probably the most consistent swim, 1 and 24 by the pumphouse can throw up some bigger fish but are sometimes a bit hit and miss.17 to 21 are normally consistent pegs as is 14 on the bottom bank. Most of the pegs have reeds on the inside and some pegs have lilies and fish can be caught very close in.

I used to fish the pond a lot and it was one of my favourite venues, I once won seven matches on the trot with weights from 8lb to 20lb caught on the waggler and the pole and the weights were all made up of quality fish, roach, chub, perch and odd bream. But as the pond has matured there has been an explosion of small fish and the matches tend to be dominated by whip anglers catching over 200 fish in some cases and that’s not really my cup of tea. Lots of quality fish still feature in catches but very often it’s just a case of fishing for bites and hoping some bigger fish show among the smaller fish.

Pleasure anglers enjoy some fantastic fishing with 20lb bags commonplace. I do quite enjoy the fishing during the winter where feeding some groundbait and fishing the pole with pinkie, maggot or caster should get you plenty of bites and 8-10lb is normally needed in matches. Have a look at the link below when I enjoyed a cracking day’s fishing in December.

It’s a great place for youngsters to go and they will get bites all day long.

Here’s the links to a couple more matches, a win for me and a cracking perch for Leighton Cox

and a very tight affair