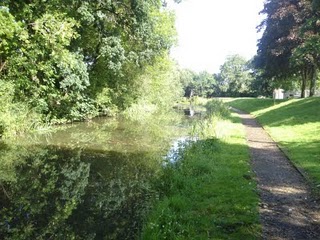 This weeks Fishery Focus is on Ilminster Canal and it’s a venue that’s very dear to my heart. Although my first ever fishing trip was to the Isle, I spent most of my younger years down the canal as it was only a short walk from where I lived. I’ve seen it go from a stagnant pond to a cracking little wild fishery where you could be and nobody would know you were there to it’s current incarnation. It now has a path and the bankside vegetation on both sides is managed now. It can get quite busy with dog walkers and youngsters playing in the recreation ground but it’s a place I still love and don’t fish nearly enough.

The canal is an Ilminster AA water and club licences can be purchased from Mark Nicholas at Ilminster Warehouse, Ditton Street, Ilminster, Somerset and the fees are as follows

There is some off road parking at the bottom end of the canal.

When I started fishing any catch was notable and my ancient photo albums are full of photos of me with a catch of seven small rudd or a single roach and a eel! Over the years I’ve had many firsts on the canal from my first carp and golden orfe (which I won a rod from the Anglers Mail for) to my first stillwater chub and numerous match wins as a junior and senior. It’s held allsorts of species over the years from gudgeon to crucian carp but the main species are carp, roach, rudd, perch, tench, eels and skimmers. Most of the carp are around 2-4lb but there are supposed to bigger fish in there, for me the quality roach, perch and skimmers are the real attraction. Some cracking roach and perch to over a 1lb are common and tench and skimmers to 2lb plus feature regularly along with odd carp.

The canal can suffer from excessive weed growth during the summer but there are normally a few swims that are fishable. Most of the swims have a feature in the form of trees and reeds across or weedbeds although you can catch a lot of fish by just fishing down the middle. The pole is a top method although on warmer days floating crust can really score for carp. All the normal baits will catch you fish although chopped worm and caster does really well for the roach and perch and with groundbait banned, an expander pellet fished over micros will attract the skimmers which can go to over 2lb.

Maggots and casters will get you plenty of bites although in the winter scaling down your tackle and using pinkies on the hook should see you get plenty of action. Match weights can go over 20lb in the summer with double figure bags common, during the colder months matches are won with 7-8lb nets which still include plenty of quality fish. The carp can show up at any time and regularly feature in winning nets.

Well that’s this weeks Fishery Focus, check out some of my blog posts from when I’ve fished the canal below