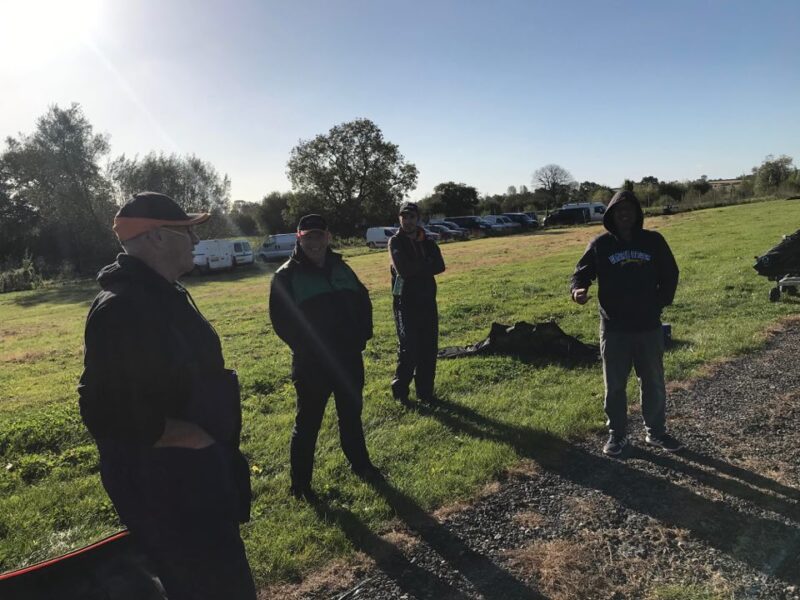 In the last match here, I spent an hour fishing across for carp but struggled so decided to fish for silvers and had a lovely day catching nine crucians, a barbel plus rudd, roach and little skimbobs for 12lb odd but was a long way behind the winning weight of 21lb. The temperature dropped a few degrees in recent days so it would be interesting to see how it fished today.

A few of us met for breakfast at the bowling club before heading to the fishery, we were the last ones to arrive and Chanter’s lovely wife drew me peg 14 which I was happy with as I was hoping to avoid the ends. I had silvers supremo Stu White on my right with Nigel Easton next to him and Rob Parker to my left. I’d spoken to a couple of people who’d caught really well fishing top three to hand with casters so spent some time time on Saturday making some rigs up and tying hooks although it had been a lot cooler the last couple of nights so I wasn’t sure the weights would be as good as the 25lb needed to win last week. 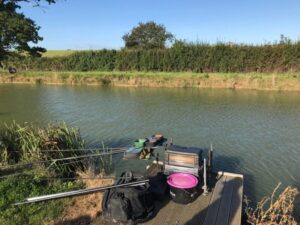 I was happy with my peg 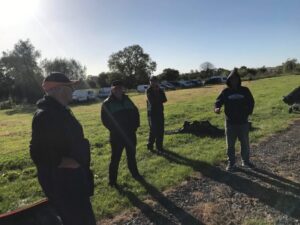 Some socially distanced banter before the start with (from l to r) Dave Hilton, Chanter, Andy Downton and Terry ‘The Toast’

I set up a Drennan 0.4 gram Carp 1 for the top two plus two line and then two Guru 0.45g F1 Carbon Slims, one for top two to hand and the other for top three to hand. On the side tray I had casters, two pints of reds plus some dead maggots and groundbait was Bait-Tech Special G Dark and The Juice.

Steve shouted the all in and I cupped in two balls of groundbait at top two plus two before starting with the top three to hand rig, feeding a few casters. There was certainly a nip in the air and the gusty wind was already a pain making feeding and presentation difficult. After ten minutes I hadn’t had a touch on maggot while Stu, Nigel and Rob were catching the odd decent roach and little skimmer fishing five or six sections out. I moved onto my top two plus two line and after what seemed like an age, the float sunk from view and I had a nice little 4oz skimbob, a couple of roach followed and I thought I’d start to get a few and have a nice match.

Then my next fish was a small carp and I was having to wait ages for bites and when the float went under it was either a carp or a F1! Nigel was catching a procession of crucians along with some small F1’s that he kept trying to pass off as crucians but Stu was having none of it! After an hour I literally only had ounces in the net and this definitely wasn’t going to plan!

The second hour was just as bad, if not worse, although I was putting together a nice bag of F1’s! Steve Hutter wandered up and said he was struggling, Stu said he had around 2lb and Steve said he had the same. I was going nowhere fast so started a new line at top two plus three, I shipped out with two reds on the hooks, tapped in a few maggots via the toss pot, the float went under and I had a nice roach, cracked it!

The next two fish were roach and then it was back to catching F1’s, much to Stuart’s amusement! He was catching a few nuisance fish as well but also getting some decent silvers and doing a much better job of it than me. I kept swapping between my lines but never had a touch on the two shorter lines, I did finally catch a crucian on the top two plus two line but I think it must have got lost on the way to Nigel’s peg!

If I’m honest, I was ready for the all out with a couple of hours to go, I knew I was going nowhere fast, had been well beaten either side and just didn’t know what to do to make a difference! At the all out, the scores on the doors for me were 14 silvers (1 crucian and the rest roach and skimmers) plus over 20 F1’s and around 10 carp! Chanter and Dave White (who both hadn’t fished today) started the weigh in and Dave Hilton on peg 17 had 4lb 2oz, Nigel weighed 6lb 4oz and then Stu had a nice net of silvers for 10lb 9oz. I only weighed for the sake of the side bets and my haul went 2lb 2oz, Rob had 4lb 8oz so I’d been proper ‘chip shopped’! 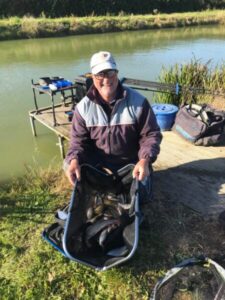 Stuart had 10lb 9oz of silvers including a nice barbel

Richard Bull on 12 weighed 3lb 9oz and probably had the same amount of F1’s as me (I reckon they were shoaled up on every other peg!). Steve Hutter had gone back and fished shallow with maggots to weigh an excellent 11lb. Terry ‘The Whipmaster’ Morgan did brilliantly and put 8lb 3oz on the scales before Martin Tizard on peg 9 went into the lead with 12lb 9oz.

Rob Eagle on peg 8 had 7lb 7oz, Steve P chucked back and had suffered a bit of a nightmare with the wind blowing all his top kits and bait boxes in the pond! (I did say he could have had my bait as I wasn’t using it!). Baz weighed 4lb 2oz on peg 6, Andy Downton had 3lb 9oz and then Lee J had a lovely day on peg 4 to take the lead with 15lb 4oz. Kev Newman had 6lb 4oz on peg 3, then Chilly on 2 and Steve L on 1 didn’t weigh. Thanks to Steve Chant for the photos* 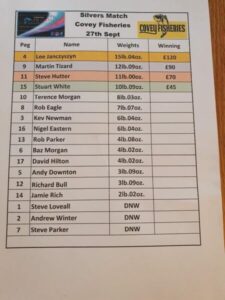 The full results (I’m very near the bottom!)* 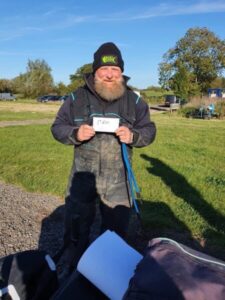 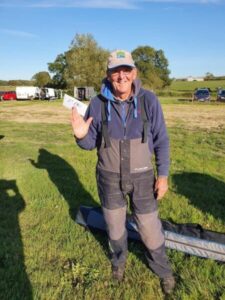 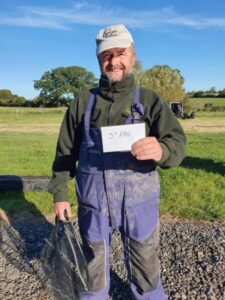 Steve Hutter was third with 11lb from peg 11*

I was never at the races today and I drove home feeling really deflated, looking at the results, I think I was probably at the wrong end but there were fish to be had because Stuart caught them! I’ve just got it all wrong, tried fishing too short for too long, didn’t really know how best to feed it and basically was just outclassed by much better silvers anglers! Would I have caught if I’d have fished shallow on the long pole like Steve H had? I’ll never know because I didn’t try it and that’s what separates the really good anglers from the rest of us. What makes it worse is, I had a nice, pretty little rig with strung Stotz for the top two line that would have been perfect for it!

I’m still beating myself up about it two days later and I know at the end of the day, it’s only fishing but those of you that know me and my current situation, know how important my fishing is to me. The good thing about match fishing is that there’s always another one the following week and if you have a good day, the bad ones fade in the memory (until the next one of course!) and if you learn something from your bad match, squirrel it away for the next time and then the day wasn’t a complete waste!

As always, it was an impeccably run match by Steve and he’ll be running some more soon including mid-weekers if there’s enough interest with equally split pools for carp and silvers so keep an eye on the Covey Fisheries FB page for details.