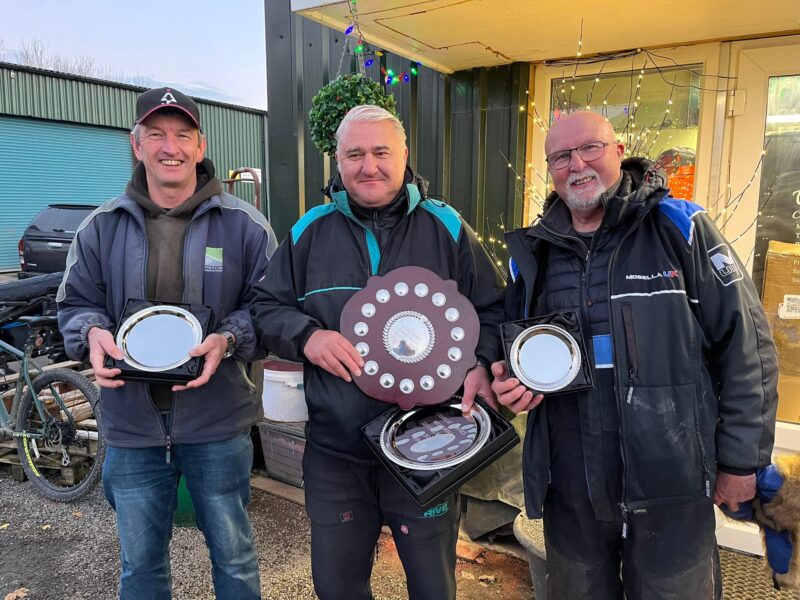 Charlie loved his silvers fishing and another venue he used to frequent was Acorn Fishery up near Kingston Seymour. I’ve been wanting to fish it for ages and when I saw there was a memorial match for Charlie I phoned up and booked in. I get a real buzz fishing new venues and spoke to a few people to get an idea how to approach it.

Awake early, it was pretty nippy as I loaded the car but thankfully there hadn’t been a frost, on my way I stopped off at the services in Bridgwater for breakfast which was nice before heading up the M5 to Clevedon. I arrived at Acorn in good time and picked up some bait and bought a few bits and bobs from the shop. There was a good turn out of 26 including Vic Bush, owner Mark Bartlett, Andy Gard and Kev Perry.

Mark welcomed everyone before getting the draw underway, I pulled out peg 18 which was on the far side and I could park right behind my peg. Andy G was on 19 and the last time I’d seen him was on the Stour and we’d been neighbours that day as well. It was certainly very cold and I was glad I’d put my thermals on this morning and my gloves also made their first appearance this winter. 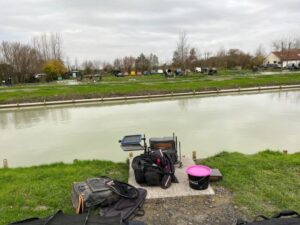 It was a cold one!

I’d been advised to begin short and then start new lines, working my way out as and when required, so I set up two identical Drennan 0.4 gram Carp 1’s (in case of a breakage) with size 18 Guru F1 Pellet hooks to 0.10mm. Plumbing up there was a nice depth and the bottom of the near shelf was at top two plus two sections. On the side tray I had red and white maggots, disco pinkies, casters plus some Bait-Tech Special G F1 and Dark groundbait.

The general consensus was that 15lb would be a good weight today so on the whistle I only cupped in a few maggots on the top two plus two line angled to the right and a little nugget of groundbait with a few pinkies on the left hand line. I started with a single red maggot on the right hand line and thought it might take a while to get a bite. After about five minutes, I struck at a little dig on the float and a decent amount of orange hydro showed itself, I carefully shipped back and netted a nice 8oz skimmer.

Next chuck I had a little carp followed by a decent roach and I was getting regular indications, just toss potting a few maggots every put in. Approaching the end of the first hour, I’d had three skimmers, four roach and a little 8oz tench (plus two carp) for about 2.5lb and from what I could see, I was doing ok. Then the float sailed away and I could tell it was another tench from the jagging fight and a lovely fish of a pound plus was added to the net.

I tried the groundbait line, hoping I’d be able to swap between the two lines but I never had a bite there, back on the maggot line I was still getting odd fish and during the second hour I had another three skimmers, two roach and a baby tench although I did pull out of a skimmer and bumped a fish.

With two hours gone I had around 5lb and it was looking like it was fishing really hard, Andy next door had caught some little tench but was also hooking quite a few carassio. Bites tailed off on the short maggot line and I only added a 2oz tench in the next 20 minutes so decided to start a new line a section further out. A small roach first chuck was encouraging but then I couldn’t get a bite so I came half a section back between the two lines and had nice skimmer quite quickly. I started swapping between the two fed lines and also dropping in between them and was getting odd fish, including another decent skimmer.

Shipping out I toss potted in some maggots, the float buried straight away but as soon as I struck I knew it was a carp and after a short scrap, netted a 3lb mirror. A few minutes later, a repeat performance and it felt like the vermin had moved in but then after the first couple of runs, the fish was just plodding and I thought perhaps it was a carassio or F1 only for a great big 2lb plus perch to come to the surface – bonus!

Another skimmer kept the catch rate ticking over and despite it being freezing cold, I was really enjoying it. I could see Vic Bush over on peg 3 and he was starting to catch skimmers regularly but most people now seemed to be struggling for the odd fish. With around ninety minutes to go, my bites dried up as well so I started another line a section further out but there was no quick response this time. Although I didn’t catch on this new line, resting the others definitely helped as during the remainder of the match, I managed a few more fish including a couple of little tench. Andy landed a big perch and was getting some nice roach as well.

Most people (including me) were starting to hook more carassio and carp and I landed a six pounder just before the all out. I ended up with 21 fish (skimmers, roach, tench and that perch) and although not loads of fish, they were a decent stamp. The scales started on the far bank so I had plenty of time to pack my kit away and have a cup of coffee. When they arrived on our bank, I walked up to watch the last few pegs weigh in. Martin Rayet on peg 6 was leading with an excellent 13lb (which included two handy tench, one of 4lb and another of 2.5lb he landed on the whistle) and I knew I didn’t have that much but next was Vic with 8lb 10oz and I thought I might be close to that.

Eddie W on peg 12 had 8lb 7oz before Glen Calvert on 13 went into second place with 9lb 2oz so there were lots of close weights. The next two pegs weighed 2lb 12oz and 2lb 10oz and then it was me, my fish went 11lb 4oz which put me second so far. Andy had 6lb 1oz, the next peg didn’t weigh and last on our bank was Geoff Grant who had 4lb 13oz. 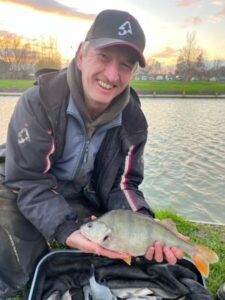 I had 11lb 4oz which included a lovely perch 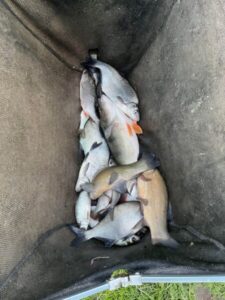 I had some nice skimmers, roach, tench and that perch 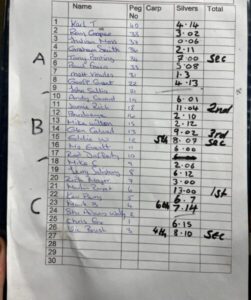 Back at the shop and there was a Christmas Open Evening with Mark B and Tom Maker doing some rig tying demonstrations later and the fishery had arranged a food van with free burgers and drink which went down a treat. Mark did the results and I was second and picked up a very nice £90 plus a lovely trophy. 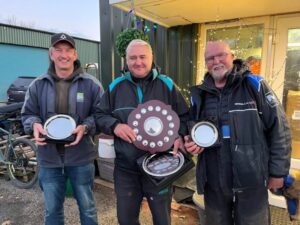 Me with winner Martin Rayet and Vic Bush 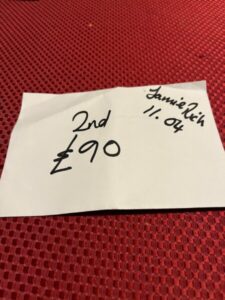 I have to say, although it was a long day by the time I got home, I loved every minute of that! What a cracking fishery Mark and Zoe have with everything you could want on site and some brilliant fishing too. I actually felt I fished a half tidy match, I did miss a few bites but only lost one fish and bumped another.

Next up – Ilminster’s Xmas Fayre